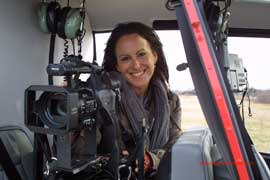 KINGSTON, R.I. – Dec. 10, 2013 – A University of Rhode Island film professor appeared on national TV this morning in a segment on the TODAY show about her film Reliance, the story of a Rhode Island state trooper who trains pound dogs for search and rescue.


Mary Healey Jamiel, an associate professor of Communication Studies and Film/Media in the Harrington School of Communication and Media, was featured in the story, along with Matthew Zarrella, a Rhode Island state police sergeant who saves dogs from animal shelters and trains them to be search and rescue K9s.


“I feel like it’s the ultimate second-chance story,” Jamiel says in the TODAY story, which aired at 8:40 a.m. “Here are these dogs that are discarded, and now they can save people.


The TV segment coincides with the official launch of the film’s Kickstarter fundraising campaign. The goal is to collect $70,000 in 30 days. Pledges will be used for final production costs. If the goal is not reached, the money will be returned to supporters.


Zarrella trains dogs for the Rhode Island State Police, as well as other law enforcement agencies and volunteer canine teams throughout the country. He has also helped the FBI, the Drug Enforcement Agency, and the Defense Department. Jamiel’s film is deeply personal, talking about Zarrella’s affection for dogs as a boy and how they instilled a confidence in him that brought him to police work. Healey also follows Zarrella on rescue missions in the United States and as far away as Vietnam to recover the remains of soldiers missing in action.

“Reliance gives people a rare behind-the-scenes look into the world of missing person searches,” says Jamiel, of Warren. “In many cases, these searches mean life or death for a missing victim, or the ability to provide answers or closure for decades-old tragedies. This story is remarkable and it has been an unbelievable privilege to capture on film the incredible activities that occur behind the scenes on a missing persons K9 search and rescue operation.”


Mary Healey Jamiel is a documentary filmmaker and associate professor in Communication Studies and Film/Media at the University of Rhode Island. Her 2005 award-winning documentary, Holy Water-Gate, was the first film to expose 25 years of institutionalized cover-up of child sexual abuse by priests, detailing the methods that concealed these crimes for decades. Holy Water-Gate premiered on Showtime Networks and was broadcast on CBC/Canada, SBS/Australia, TVE/Spain, RTSI/Switzerland, DR/Denmark and the Documentary Channel.


Kickstarter is an online crowd funding resource that allows individuals and groups throughout the world to contribute to creative projects. In return, backers receive items associated with the project, such as a T-shirts, DVDs, or (for as little as $100) their name in the credits.


Photo above: Mary Healey Jamiel, an associate professor of Communication Studies and Film/Media in the Harrington School of Communication and Media at the University of Rhode Island. Healey is making a film about Matthew Zarrella, a Rhode Island State Police Sergeant who saves dogs from animal shelters and trains them to be search and rescue K9s.