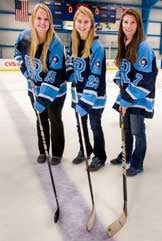 
But they never imagined they’d get the chance to compete against the best college players in the world.


The University of Rhode Island students have recently been chosen as members of Team USA for the 2013 Winter World University Games in Trentino, Italy, Dec. 11 through 21.


“It was definitely a surprise when I got the call,” Catlow said. “I was on the phone with our head coach, pacing around the house. I couldn’t sit still.”


“I was pretty excited. I couldn’t believe it,” said DiFilippo.


The winter and summer World University Games take place every two years, and consist of seven compulsory sports in the winter and 12 compulsory sports in the summer as well as one to two optional sports chosen by the host country. The games are open to all student-athletes between the ages of 17 and 28, who are attending a university or who have not been out of college for more than a year. Second only in importance to the Olympic Games, the World University Games showcase the finest student-athletes from all over the world.


Justine Ducie, ‘11 was the first player from URI to compete with the first Team USA women’s squad at the World University Games in 2010.


“Lauren, Cassie and Alisha now join the elite student-athletes in the American Collegiate Hockey Association (ACHA) to compete at the highest level for our non-varsity athletes,” McCann also said “I am very proud of them and the national recognition they have brought to our program. URI provides a great opportunity for student-athletes to continue playing at the collegiate level.”


To be considered for the World University Games, Catlow, DiFilippo and Hillberg had to fill out applications for Team USA. “After we filled them out, we were monitored during the season. Then, the committee made its decision,” DiFilippo said.


However, it’s not quite as simple as it sounds. Players need to be standout athletes – something that the teammates have more than proven.


As assistant captain of the URI women’s ice hockey team, Catlow has earned several awards, including her most recent – the 2013 Zoe Harris Player of the Year award, presented to her by the ACHA. It’s the top individual honor in an association of 48 Division 1 women’s college club hockey teams. Catlow, a kinesiology major, began playing on boys ice hockey teams when she was 9, eventually working her way up to serving as captain of her high school’s varsity ice hockey team in Pomfret, Conn. Her great career continues at URI. “Playing on the URI team has been great,” the North Kingstown resident and junior kinesiology major said. “It’s been an awesome experience.”


DiFilippo says her biggest honor was being named 2012 All-American Second Team in the ACHA. The Hope, R.I., native played on traveling teams until high school, when she began playing for her school’s team at La Salle Academy in Providence. “My older brother played ice hockey for Scituate High School,” the junior health promotions major said. “When I was little I watched his games, and that’s what inspired me to really start playing. I knew I would continue playing once I started college, too.”


The teammates leave Dec. 3 for Chicago, where they will train for a few days. From there, they will fly to Italy for the games. They are thinking about the competition they’ll face from other countries, but overall, they are excited about the opportunity that lies before them.


“The World University Games are the highest level for college athletes,” Catlow said, “so it’s really an achievement.”


DiFilippo agrees. “It’s an honor to be chosen to represent the United States,” she said.