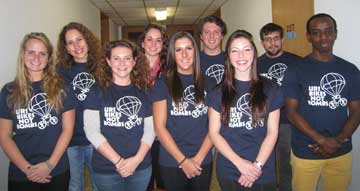 KINGSTON, R.I. – Dec. 5, 2013 – In the United States, bikes are as easy to come by as clean drinking water. Not so in Africa, where they are a treasured mode of transportation.


Bikes carry medicine. Bikes transport villagers to health clinics. Bikes put food on the table by providing a way to get to a paying job.


That’s why a group of University of Rhode Island political science students have collected 80 used bikes to send to Ghana and Uganda as part of a community service class with a global focus.


One of those students, Ibrahim Nour ’15, has firsthand knowledge of how crucial bikes are in Africa. He grew up in the Republic of Chad in Central Africa, where bikes are rare – and valued.

He remembers piling onto one bike with three other people to get around town.


“People here don’t understand the significance of a single bike,” he says. “A bike can change the life of a person in Africa. It will help a person travel from village to village for a job, or it can be used to transport water. There are hundreds of examples.”


Kristin Johnson, associate professor of political science at URI who taught the community service class, came up with the idea for the project after learning about Bikes Not Bombs, an organization in Jamaica Plain, Mass., that collects and renovates bikes and ships them to Africa, Latin America, and the Caribbean. The group collects 6,000 bikes every year.


Bikes that are not shipped land in youth programs in Boston and other New England communities where young people learn how to take them apart and put them back together again. The teens learn how to be bike mechanics and they get to keep the bikes.


For the URI students, the project was not only a way to give back; it developed their organizational skills and exposed them to other cultures. The students read about the economic and political hardships in Ghana and in Uganda, where the northern part of the country has been ravaged by a brutal civil war.


“They were so creative in figuring out how to do this,” says Johnson. “They did a great job getting it off the ground. It’s not easy planning such a big event.”


The collection started in the fall. The group reached out to the Newport Police Department, which donated about 40 used bikes. The other bikes, from racers to high-end mountain bikes, came from individuals, community groups, and bike clubs. Personal garages served as storage units.


Earlier this week, the students took the bikes to the Newport police station, and Bikes Not Bombs picked up those donations, as well as the police bikes. Most of the bikes will be tuned up by Bikes Not Bombs members and sent to the two African countries.


In Uganda, the bikes will help health care workers reach sick people in remote villages – a plus since medical workers are in short supply and in populated areas. In Ghana, the bikes will go to a cooperative bike shop staffed by people who are physically challenged, mostly from polio.


“Bikes Not Bombs is improving multiple ways of life,” says Hannah Tickle ’14, of Warren. “It’s also teaching people a skill and helping them receive some kind of income.”


“It makes me feel good that we’re helping other people,” says Tia Guilbert ’15, of Charlestown, who is studying sociology and political science. “We’re also recycling used bikes so that’s important.”


“Mobility is a huge issue in Africa,” says Dore. “I wanted to help as much as I could. To look at something so basic as a bike that can literally change someone’s entire life was inspiring.”

Johnson hopes to make the bike collection an annual event at URI. Her class is supported by funds awarded to her as the Silvia Chandley Professor of Peace and Nonviolence.


“The students are making a big difference in a small number of people’s lives,” she says. “That’s such a valuable experience.”