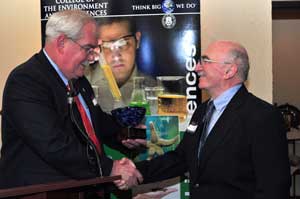 KINGSTON, R.I. – December 2, 2013 – More than 100 colleagues and former students were in attendance last month as the University of Rhode Island’s College of the Environment and Life Sciences inducted Professor Paul Cohen into its hall of fame. The Narragansett resident was recognized for his 47-year career studying E. coli and for his teaching and mentorship of numerous graduate students who have gone on to have highly successful careers.


“Paul has had tremendous success in his decades of teaching, research and service at URI,” said John Kirby, dean of the URI College of the Environment and Life Sciences. “That is best exemplified by the success of his students and their expressions of the key role that Paul played in helping them get to where they are today. The theme that comes through from each of his former students is that he cared for them and was truly interested in their success, interested enough to step up and help them find opportunities and then to succeed at those opportunities.”


Cohen joined the URI faculty in 1966 following a postdoctoral research appointment at St. Jude’s Children’s Research Hospital in Memphis, Tennessee and earning his Ph.D. at Boston University in 1964. During most of his URI career, he conducted research on the various strains of E. coli, the common bacterium that lives in the intestines of humans and other warm-blooded animal, in some cases causing serious intestinal disease.


“There are good E. coli and bad E. coli, and I was interested in their nutrition. What sugars does each strain eat in order to grow in the intestine?” Cohen explained. “For the bad E. coli to survive, they have to figure out what to eat so they aren’t competing for food with the good E. coli and with other bacteria.”


He also studied E. coli that cause urinary tract infections , some of which are able to “hide” in the epithelial cells of the bladder to avoid being killed by antibiotics and in that way cause recurring infection after antibiotic treatment is withdrawn. He said he may have figured out how they can hide there, but there is much more research to be done. “That work will still be going on long after I retire,” he said with a smile.


Gongqin Sun, chairman of the URI Department of Cell and Molecular Biology, said that while Cohen’s research has increased the understanding of how E. coli causes disease, his greatest achievement may be in training the next generation of molecular biologists.


“Paul trained 32 graduate students during his career, far more than most faculty members,” said Sun. “But it’s not just the number of students he’s trained, it’s the quality of the training they received. Most have gone on to become very successful researchers, educators and industrial leaders. Paul doesn’t look at training students as a way of advancing his own career success, but as a way of helping them reach their potential.”


Among those who earned doctoral degrees working with Cohen are Craig Rosen, executive chairman and chief scientific officer of PhaseBio Pharmaceuticals; Bruce Zetter, professor of cell biology and surgery at Harvard Medical School; Diane Pennica, senior scientist at Genentech, one of the largest biotechnology companies in the U.S.; and Beth McCormick, professor of microbiology at the University of Massachusetts Medical School. All were in attendance at the celebration honoring Cohen.


Sun said that in addition to training students, Cohen has provided guidance to several generations of young faculty members as well. “Long after he retires, Paul’s influence will still be felt here at URI,” Sun said.


That is especially true now that a scholarship has been established in Cohen’s name. More than $36,000 was raised at the hall of fame celebration to endow the Paul Cohen Graduate Mentorship Fund. The College has a goal of raising $250,000 for the fund, which will support graduate students studying cell and molecular biology while underscoring the importance of mentorship in the sciences.


“I was tremendously surprised and pleased with the honor and all the kind words that were said about me,” Cohen said. “I’ve always thought that I was just doing my job. When you train people and see that they’ve gone on to do great things, you don’t think about yourself, you think about their great success. So it was amazing to me that so many of them came back for that celebration.


“I loved helping them and seeing them be successful, but I must admit that I also loved doing the work,” he added. “Every day I’m still excited to see the results from yesterday’s research. I still love the work and the teaching.”


Cohen expects to retire from URI in January 2015.


Those wishing to contribute to the Paul Cohen Graduate Mentorship Fund should contact Amy Porter, associate dean of the URI College of the Environment and Life Sciences, at 401-874-2446 or amy_porter@mail.uri.edu.

URI Professor Paul Cohen, right, receives congratulations from John Kirby, dean of the URI College of the Environment and Life Sciences, at the College’s hall of fame induction ceremony. (Photo by Chandu Dondeti)