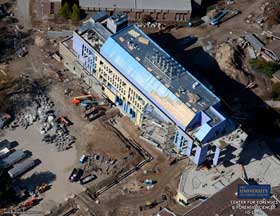 KINGSTON, R.I. – November 24, 2014 – If you haven’t taken a ride or walked to the north edge of campus on Flagg Road, you are missing a stunning new addition to the University of Rhode Island skyline.


With the steel framing complete, all of the concrete flooring poured for each level, and installation of some of the brick exterior now underway, the new Center for Chemical and Forensic Sciences is taking its place in the life and health sciences district with its neighbors, the Center for Biotechnology and Life Sciences, the College of Pharmacy building, the Chafee Social Science Center and White Hall, home to the College of Nursing.


But it’s not just the north section of campus experiencing changes. The new LGBTQ Center on Upper College Road, formerly the site of Ruggles House, has been framed, and exterior walls and the roof have been erected. And down Kingston Hill to the west, crews successfully completed blasting operations during a two-week period and now excavators are removing stone to make way for an expansion of Butterfield Dining Hall. 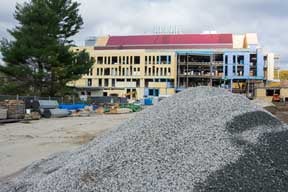 
Paul DePace, URI’s director of Capital Projects, said the $68 million Center for Chemical and Forensic Sciences should be enclosed by the end of January.


“That is an important milestone because then we can start building out the interior,” he said. “The new center connects to the Chafee Social Science Center and closely adjoins the Social Science Research Center, White Hall, Rodman Hall and the Phi Gamma Delta Fraternity house. We have an excellent team on the project that understands the vital need to protect the ongoing activities in the adjacent buildings while progressing with the new building.”


“It’s exciting to look out and see the rapid progress being made on this magnificent facility,” said Winifred Brownell, dean of the College of Arts and Sciences. “All of us in the college, and especially our faculty and staff in the Department of Chemistry, know how this center is going to transform teaching and learning as it provides the best laboratories, classrooms and technology.”


In May, the University held a ceremonial groundbreaking, during which URI and state officials thanked taxpayers for their support of a $61 million bond issue that provides the primary project support. The Center is viewed as a key component in further strengthening the University’s leadership position in the health and life sciences, and it is important to building the state’s knowledge economy. Private funds are also being raised to support the Center.


The Center’s design is consistent with some of the elements of its newest neighbors in the north district, including sustainable design features such as the use of natural light and energy-saving infrastructure components. The design also includes a generous amount of space dedicated to collaboration between faculty and students.


One of the central features will be an interior connection between Chafee and the new center. The new structure will also provide heating and cooling energy to new infrastructure planned for White Hall.


The facility will serve more than 7,000 URI students who take chemistry each year; about 40 percent of all URI degree programs require at least one chemistry class. It will provide chemistry instruction to approximately 1,400 students each day.


The Center will triple the amount of space for teaching labs and nearly double the space for research labs compared to current facilities in Pastore Hall, which was built in 1953 to accommodate 800 students.


The Center will also house one of the nation’s key resources for research and training in the battle against terrorism – the U.S. Department of Homeland Security’s Center of Excellence for Explosives Detection, Mitigation and Response.


“Clearly, the new center will be a huge improvement over the outdated and cramped Pastore Hall, as it will be able to accommodate the large number of students who are required to take chemistry courses at URI,” said Professor William Euler, chair of the Department of Chemistry. “Beyond state of the art laboratories and technology, students will find study and lounge spaces conducive to group study and group projects.”


The building was designed by Wilson Architects, Inc., of Boston, Mass, and is being constructed by Bacon Construction Co., Inc., of East Providence, R.I. 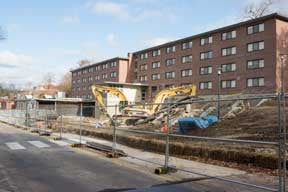 Residents of the Freshman Village have gotten used to the sounds of excavators preparing the site to the south of Butterfield Dining Hall for an expansion of the dining facility.


DePace said the $12 million project will add 9,000 square feet that will accommodate seating for an additional 200 patrons. The project also calls for kitchen improvements, including installation of more energy efficient equipment, modifications to the loading dock and landscape improvements.


Vision 3 Architects of Providence designed the project, which is slated for completion by September 2015. Named for former President Kenyon L. Butterfield, (URI 1903 – 1906), Butterfield was built in 1950 as part of the residence hall at the same site. The contractor is Trac Builders of Providence. 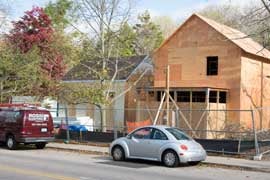 With a grand opening of the new Lesbian, Gay, Bisexual, Transgender and Queer Center set for spring 2015, it’s a good sign that framing, exterior walls and the roof are in place at the center on Upper College Road. State officials and members of the University of Rhode Island community broke ground last fall on the $2.1 million, 4,300-square-foot building. URI is the first institution of higher education in the country to design and build a free standing LGBTQ Center.


Designed to give URI’s LBGTQ community a strong identity, the single story, stone and clapboard building will have a veranda running along the front of the center and plans call for its roof to feature ornamental plants and flowers. The Center will have a multipurpose room with a capacity of about 50, a conference room for about 20 people, a group counseling room, and a student lounge. There will be offices for the director, three staff members and student staff members. The Center is part of URI’s Office of Community, Equity and Diversity.


Designed by LLB Architects of Pawtucket, the new building is consistent with the main campus roadway’s residential style. It is being constructed by Nadeau Corp. of South Attleboro, Mass.


Currently located in Adams Hall, the Center provides a range of programs and services to create and maintain an open, safe and inclusive environment for lesbian, gay, bisexual, and transgender community members and friends.


This is an aerial view of the Center for Chemical and Forensic Sciences on URI’s Kingston Campus. Photo courtesy of Bill Wilson.


A ground-level view of the Center for Chemical and Forensic Sciences. URI Photo by Nora Lewis.


Work continues on URI’s new, $2.1 million Lesbian, Gay, Bisexual, Transgender and Queer Center on Upper College Road on the Kingston Campus. URI is the first institution of higher education in the country to design and build a free standing LGBTQ Center. URI Photo by Nora Lewis


Site work continues on the $8 million project Butterfield Hall project that will add 9,000 square feet to accommodate seating for an additional 200 patrons. The project also calls for kitchen improvements, including installation of more energy efficient equipment, modifications to the loading dock and landscape improvements. URI Photo by Nora Lewis.