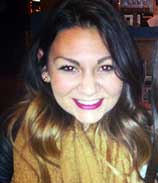 KINGSTON, R.I., Nov. 19, 2014 – Rebecca Chace spent the summer with Woody Allen, and, yes, he actually wears a bucket hat every day – rain or shine, indoors or outdoors, on set or at rest.


The world-famous filmmaker is also fond of button-downs, khakis and sensible shoes, says Chace, a University of Rhode Island senior who worked as an intern in the wardrobe department on the set of Allen’s latest film, shot this summer in Newport and Providence.


“It was the coolest thing I’ve ever done in my entire life,” says Chace, 21, of East Haven, Conn. “I thought I would just end up getting coffee, but I learned so much. I met a lot of people and made a ton of connections.”


She made so many contacts she’s confident she’ll find work on another film or as a personal stylist after graduating this spring from URI’s Department of Textiles, Fashion Merchandising and Design.


“The department helps you succeed,” she says. “And that’s important, especially in the competitive world of fashion.”


Her journey began when URI told her about the internship and she applied. Her enthusiasm came through during the interview, but she also confessed that she had never seen any of Allen’s movies, not even the Oscar-winning classic, Annie Hall. “I knew he was famous,” says Chace, “and that he wore thick-framed glasses.”


Still, she landed the job, which, to her delight, also came with a decent paycheck. The days were long, sometimes she worked 16-hour shifts, but she was never tired, or bored. As a production assistant, her job was to help the wardrobe designers, doing everything from sewing sequins on a shirt to dying white clothes.


“Woody Allen does not like white clothes,” says Chace. “I dyed them in coffee – coffee! – to create a softer cream color and a more romantic feel for the movie.”


Chace kept a journal, which she turned into a class paper. “Today was a crazy day,” she wrote in mid-June. “There were 69 background people, most of whom didn’t come in proper clothes. We shot three scenes, all in the middle of busy streets. If cars beeped or dogs barked, we had to stop. Well over a 12-hour day, but amazing.”


Another entry: “I learned that you can age shoes with mineral oil.” And another: “I see the film backwards, so none of it was making sense. However, today I have been putting things together slowly. It is now starting to come together, and I’m seeing a good story.”


Secrecy surrounds the movie, and, as a courtesy to her former boss, Chace is mum about the details. The word on the street is that it involves a romance between a tweedy college professor (Joaquin Phoenix) and a student (Emma Stone). The Indie actress Parker Posey is also a love interest of Phoenix. There’s a murder, and it’s a mystery.


Chace is quick to point out that she did not dress the stars. She dressed the extras, also known as background people, or BGs. She spent hours at Savers and other thrift stores looking for preppy college-appropriate attire. One day, she was dispatched to a sports store to buy wristbands for a jogging scene.


As expected, she observed Allen and the stars long enough to draw conclusions. Allen, she says, is a “very nice man, although older than I thought.” The 78-year-old is reserved on the set, but friendly. He smiles more often than not.


Hands down, Phoenix is “the coolest guy I’ve ever met,” Chace says. He was personable too, eating with the crew and chatting during breaks. “So down to earth,” says Chace. “I caught him looking at the trees one time.” He smokes, a lot. Chace found cigarette butts in his coat pockets.


Stone is more aloof. “I don’t want to say she had an entourage,” says Chace, “but she had people with her all the time.” Posey is kind of flaky. A pen exploded in her handbag, and Chace had to work furiously to clean it before shooting could resume.


“I really lucked out on this internship,” says Chace. “I was part of the team from the beginning. It wasn’t like, ‘Go get me a coffee.’ It was like, ‘Can you do this, please?’ There were crazy, crazy hours, but not one second did I feel like I was working. It was fun.”


She is grateful to URI’s Textiles, Fashion Merchandising and Design Department for helping her get the internship. And she credits her classes, ranging from fashion retailing to apparel production, with preparing her for the job.


“The internship was an amazing experience,” she said. “They took me under their wing and guided me. I feel like I can do anything now.”


She even came away with a present: a bucket hat that says, “Woody Allen, Summer 2014.” Her supervisor also gave her a writing journal with the inscription, “I’m sure you’ll do amazing things with your life, but always remember to take the choice of the bigger risk. Lots more fun.”


As for Chace’s film legacy, look for her name when the movie credits roll.


Pictured above: Rebecca Chace, 21, a senior in the Textiles, Fashion Merchandising and Design Department at the University of Rhode Island who worked as an intern on a Woody Allen movie shot this summer in Providence and Newport. Photo courtesy of Rebecca Chace.