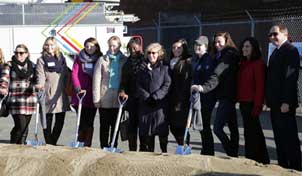 The multi-million dollar project will house the Rhode Island Nursing Education Center, Brown University offices, graduate student housing and a parking garage. More than 200 guests joined the elected leaders in celebrating the project as it moves closer to actual construction, which is expected to start in early 2015.


“Today’s groundbreaking is an exciting milestone in this historic project,” said Galvin. “However, the more significant development to be celebrated today is the unprecedented cooperation and partnership among our elected leaders, and public and private institutions of higher education that made the South Street Landing project possible.”


The three college presidents hailed the increasing collaboration under way between their respective institutions and underscored the important economic contributions their schools are making to the state’s economy.


“This day is a testament to the dedication and commitment of RIC, Brown University and URI, state and city leaders, Dick Galvin and his team, and other members of the Rhode Island community,” said President Dooley.


“As this project advances, the work to leverage the incredible potential of the I-195 corridor is strengthened,” said Galvin. “The revitalization of the former jewelry district that has been fueled by Brown University and others also takes a giant step forward.”


The Nursing Education Center used by RIC’s and URI’s nursing programs is expected to advance Rhode Island’s role as a regional leader in healthcare and nursing education.


The participation in today’s groundbreaking of business leaders and labor leaders such as Rhode Island Building Trades President Michael Sabitoni provided further evidence of the project’s power in drawing different interests together in support of the common goal of job creation and economic growth.


Elected leaders and other officials participating in today’s events offered the following statements on the South Street Landing Project:


“This project encompasses education, infrastructure and workforce development—the building blocks of a good economy. The Nursing Education Center will allow public and private institutions of higher learning to partner and forge a path to advance Rhode Island as a regional leader in nursing education. I am proud of the collaborative efforts that have led us to this point, and look forward to the many jobs and opportunities ahead.”


“South Street Station represents a true public-private partnership, bringing together three universities, the state, the city of Providence, a private developer, and National Grid to transform an old power station into a critical asset for Providence’s growing meds and eds economy. Together with the Brown University’s medical school, Johnson & Wales University’s physician assistant school, and our surrounding hospitals this new joint nursing school will help to further solidify Providence as a center for health, education and research. This is a collaboration we can all truly be proud of.”


“The Nursing Education Center will certainly play a role in the economic recovery of our state. The training that our future nurses and health care professionals will receive at this first-class facility will open the door for good-paying job opportunities. I am so pleased that the state has made this investment in support of three great institutions of Brown, URI and RIC to make this groundbreaking possible.”


“This is an important investment which will pay dividends in many ways. It will preserve a city landmark which is a gateway to the 195 redevelopment district. It reuses a distinctive building in a way that helps Rhode Islanders prepare for the nursing jobs of tomorrow in a state-of-the-art facility. It puts the construction industry to work, and ideally will jumpstart the revitalization of the Davol Square area. It represents a true partnership among higher education institutions, the city, state, and federal governments, and it will help to support economic development efforts in Providence and across Rhode Island.”


“The South Street Landing project will reinvigorate Providence’s Jewelry District, and attract further development to this area while preserving one of our city’s landmark historic buildings. Moreover, this project will build upon the ongoing efforts to develop the I-195 land, and make this a true innovation district. The Council approved a tax treaty for this project because we understand that public-private collaborations like this push Providence forward by helping to expand the tax base, create new jobs, and improve quality of life for our residents.”


“Reaching this important milestone in this highly complex project has required the commitment and tenacity of our private and public sector partners. Today, we set the stage to transform a staggering liability into a gleaming asset, providing opportunities for meaningful academic connections that will have lasting benefits for our institutions, our city and our state.”


“Rhode Island College is proud to collaborate on this historic collaboration between the public and private sectors. South Street Landing, and in particular the Rhode Island Nursing Education Center, will help our state grow the educated workforce it needs to meet the changing needs of its number-one industry sector: health care.”


“The South Street Landing Project brings together some of Rhode Island’s best assets to create jobs and opportunity. This project embraces our competitive advantages while fostering our entrepreneurial spirit. I appreciate the effort that has gone into making this groundbreaking a reality and look forward to seeing it through to completion as governor.”


“I applaud Mayor Taveras for his foresight in identifying this project among his top economic development goals. As Mayor, I look forward to working closely with every stakeholder in this important project to ensure South Street Landing delivers on its great promise to create jobs, catalyze development of the 195 land, and grow our knowledge economy.”