Skip to content
KINGSTON, R.I. – December 19, 2014 – A group of 17 University of Rhode Island students in a sustainable design studio course made a series of recommendations to representatives of a dozen state and local agencies about storm resilience strategies, sustainable designs and policy proposals for the working waterfront in Providence harbor.


“The students have been working all semester to analyze the site from environmental, social, economic and cultural perspectives and creating strategies to make it more resilient to storms,” said URI Assistant Professor Austin Becker, who teaches the course with Professor Will Green. “They presented their vision for a resilient and sustainable Providence waterfront.”


“The students’ grasp of the many challenges facing the port, including storm water pollution from industrial sites along the waterfront, was quite remarkable,” said Jonathan Stone, executive director of Save The Bay. “I was particularly impressed by their very thoughtful and creative solutions to greening the port and capturing runoff before it reaches the bay, as these goals directly align with our efforts at Save The Bay to improve Narragansett Bay water quality.”


Funded in part by the URI Transportation Center, the student project is part of a larger effort that Becker and Green will launch this winter to work with waterfront stakeholders to assess the resilience of the working waterfront to storms and sea level rise. 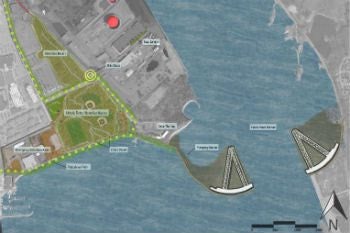 Based on their analysis of the Providence waterfront and forecasts for rising sea level and increasingly severe storms, the students proposed constructing a 2,000-foot long, 25-foot tall barrier from Fields Point to the petroleum offloading facility in East Providence, similar to the Maeslantkering storm surge barrier that protects the Port of Rotterdam in the Netherlands. The proposed barrier, including an attached berm and detention basins for storm water management, would be designed to withstand a category 3 hurricane and hold back a 21-foot storm surge that would otherwise inundate critical port infrastructure, including petroleum tanks and wastewater treatment facilities. It could also allow for the removal of the current hurricane barrier at Fox Point, freeing up valuable waterfront land closer to the city center.


“The port is extremely vulnerable to even a five-foot storm surge,” said student Brian Laverriere of Portland, Maine. “That’s what led us to the berm and barrier idea. Without it, a significant storm could do major damage.”


In addition to the physical barrier, the students recommended several policies that would improve the resiliency of those businesses that operate along the waterfront, including enhanced emergency management plans, modifications to insurance policies, recommendations that vulnerable equipment like computers be located above the ground floor level, and creation of a debris management plan.


They also recommended circulation, green infrastructure and landscape improvements and an aesthetics and education campaign, which may include artwork and historic images on the petroleum tanks, to improve the public perception of the port and harbor area. “We want the public to have a better understanding of the port and its importance to Rhode Island,” said Emily Humphrey of Exeter.


In a similar way, the students have identified ways for the public to interact with the waterfront so local residents will feel connected to the site. Among their recommendations are a bike path around the area and a series of bioswales or rain gardens that will aid in storm water collection, treatment and infiltration.


“This is a tough site to work on because there’s not a lot you can change about the operations there,” said Emily Patrolia of Beverly, Mass. “It’s a big confusing site with a lot of private property and government agencies involved. There are a lot of different entities to be sensitive to, but it also gave us a good sense of what we’ll be doing when we go to work in the professional world.”