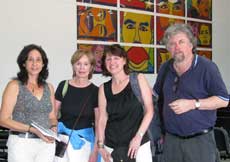 KINGSTON, R.I., Dec. 19, 2014 – University of Rhode Island students will have a front seat to history next month when they visit Cuba just weeks after the United States restored diplomatic ties with the Caribbean nation.


Twenty URI students and two professors will explore the island’s culture, history and politics for 10 days during winter break as part of the University’s J Term session. The trip had been planned months ago, but the dramatic development makes the journey even more enticing.


“Our timing couldn’t have been better,” says trip director Maureen Moakley, a URI political science professor. “It’s an exciting time to be in Cuba. This is really only the beginning of what promises to be significant transformation in the country.”


Cuba is undergoing “tremendous change,” she says, adding that the shift in U.S. policy to expand economic and diplomatic ties with the island will have “profound implications for student and faculty exchanges.” URI could be on the forefront of those changes.


President Obama stunned the world Dec. 17 when he announced steps to restore diplomatic relations with the country that were cut in 1961. Imprisoned spies were also exchanged, and Alan Gross, a government contract worker jailed in Cuba for five years, was released.

Ever since the rise of the charismatic revolutionary Fidel Castro, Cuba has captured the imagination of Americans curious about the largely isolated country, just 90 miles off the southern tip of Florida.


The country has been in transition for years. For the last several years, Cuba has been undergoing economic changes as it possibly evolves towards a one-party modified socialist government, Moakley says.


The government has permitted more free-market initiatives, lifted restrictions on sales of cars and real estate and taken steps to allow foreign companies to invest in the Cuban economy.


Mr. Obama’s plans call for opening an embassy in Havana and easing travel restrictions to Cuba – in addition to expanding economic ties, possibly with the opening of American banks. Mr. Obama did not rule out visiting the country at some point. 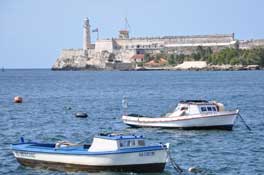 Moakley, along with Richard McIntyre, an economics professor at URI, will lead the J Term trip, from Jan. 6 through Jan. 16. Students will look at the successes and failures in Cuba, including its universal health care and educational systems, as well as its fledgling industry.


Students will explore the history of colonial Cuba and the slave trade. They’ll examine American political involvement in Cuba and the roots of the 1959 revolution that led to a severing of ties with the United States.


Moakley, who has been to Cuba twice, says students will spend three days in Havana, where they’ll tour museums, attend lectures and visit with musicians, including rap artists. Their excursions will include visits to a cigar factory, the former house of Ernest Hemingway, the Latin American Medical School and the University of Havana. They’ll spend time with Cuban families to learn more about the culture and even play a baseball game with local residents.


The group will also meet Marc Frank, author of “Cuba Revolution” and the longest serving foreign correspondent in Cuba. He writes for Reuters, the Financial Times and the Economist and is considered an expert on the Cuban economy.

Students will gather with Miguel Coyula, an urban planner, and Humberto Miranda, a philosophy professor. Both were visiting international scholars at URI in the fall. Marta Nunez, a prominent Cuban sociologist, will talk to students about the country’s educational system and her research on how current economic reforms are affecting Cuban women.


If the trip is a success, URI hopes to offer it again next year. “We’ve put a lot of work into this, and the hope is that the trip is sustained over a period of years,” says McIntyre. “Cuba is going through dramatic change. It’s next door and most Americans know nothing about it. Students will see a society that is so different from what they’re used to.”

Cuba is one of many new J Term “travel” programs offered this year. The others are in Chile, Florida, France, Hawaii, Korea, the Philippines and Washington D.C. Those trips and others are held during the winter break in January and led by URI faculty. This year, 150 students are participating in the travel offerings, up from 92 last year.


“The increase of URI students participating in short-term, study abroad programs reflects the national trend,” says Kelly Watts, coordinator of faculty-led programs at URI. “They are excited to explore new cultures, learn from their professors and engage with their peers during unique, off-campus experiences.”


Here’s a look at other Winter J Term “travel” programs:


* In Chile, students will study anaerobic energy systems. Outside the lab, students will have a chance to enjoy the sunny weather in Valparaiso and visit cultural sites.


* In the Dominican Republic, students will volunteer in a prenatal clinic, senior center, nutrition center and head start program. And in Belize students will make a documentary film, using underwater cameras while snorkeling on the world’s second largest coral reef.


* In Hawaii, students will focus on exercise science, including teaching children with disabilities and wounded veterans how to surf. Students will visit Volcano National Park, Pearl Harbor Memorial and surf in Waikiki.


Besides the “travel” courses, classes are also offered on campus. So far, nearly 400 students have signed up for campus classes, and John Olerio, coordinator of J Term, says he expects another 100 to enroll this month.


“Enrollment is way up from last year,” he says. “Last year, we had 300 students take courses on campus and the feedback from that group was positive. I think word is spreading in the URI community, among students and faculty, that J Term is a really excellent experience.”


For more information or to sign up, visit J Term.

At the Havana Center for Literature and the Arts, from left, a Cuban woman, URI professors Maureen Moakley, Kathleen Gorman and Richard McIntyre.

A street scene in Havana, with green car.