KINGSTON, R.I., Nov. 6, 2015 – A Syrian-American activist who captured the attention of a presidential candidate – and the media – with her tearful plea about relatives fleeing a horrific civil war in the Middle Eastern country will speak at the University of Rhode Island. 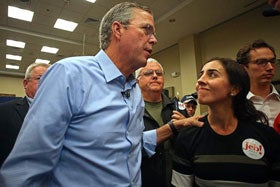 In an emotional exchange with Republican presidential candidate Jeb Bush during a campaign stop in New Hampshire, Nora Barré burst into tears when she told Bush she has 14 family members who fled the regime of Bashar al-Assad.


“There are terrible things going on over there,” she says. “They are so horrible, they almost sound fake. People don’t have a heart.”


Barré’s encounter with Bush went viral and led to interviews with the national press, including CNN, MSNBC, CBS and The New York Times. The 34-year-old former Cranston resident is using the press appearances to spark a national debate about the United States’ role in accepting refugees from the war-torn country. 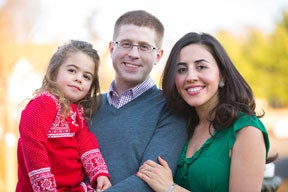 Barré will talk about the Syrian war from 4:30 to 6:30 p.m. on Wednesday, Nov. 18 at URI’s Center for Biotechnology and Life Sciences, 120 Flagg Road, on the Kingston campus.


The talk, free and open to the public, is part of International Education Week, a series of events Nov. 16 through 20 to celebrate global education at URI.


“Thanks to her courage and compassion, Nora is putting a human face on the refugee crisis in Syria,” says Kathleen Ramcharran, coordinator of International Education Week and a friend of Barre’s. “Her talk at URI is certain to raise awareness of these critical humanitarian issues – and generate discussion at URI and beyond about America’s role in helping.”


Barré was born in Alleppo – now considered the most dangerous city in the world. Her family opposed the regime of Hafez al-Assad, who ruled the country until his death in 2000, when his son, Bashar al-Assad, took over.


Barré’s grandfather, an architect, was tortured and murdered by pro-Hafez forces. “His fingernails were pulled out and he got electric shocks,” she says.


Fearing for his life, Barré’s father fled to the United States, settling in West Virginia to work as a pediatrician. Barré attended grade school and high school there, then got her bachelor’s degrees in biology and psychology at Marshall University.


In 2011, Barré and her husband, Luke, moved to Rhode Island so he could do his residency at Roger Williams Medical Center. Last July, the couple and their 5-year-old daughter relocated outside Hanover, N.H., for his fellowship in rheumatology at Dartmouth-Hitchcock Medical Center.


Civil war broke out in Syria four years ago. Barré called or communicated through the Internet with family members still living in Alleppo, but they always assured her that everything was fine. It wasn’t.


“The phone lines were tapped,” she says. “If you said anything against the regime, they’d drag you out of your house and kill you right there.”


After bombs blew up their house two months ago, the relatives – grandmother, uncles, aunts, cousins – fled to Mersin, Turkey, where people are crammed into a one-bedroom apartment. They finally felt safe enough to talk to Barré, who supports them financially, about the murders they’d witnessed.


One cousin recalled the bombing of his elementary school and seeing his dead teacher carried out on a stretcher. Another disclosed that a sniper shot to death a young mother carrying her 6-month-old baby.


Barré’s uncle told her he was walking down the street with a friend when a single bullet fired by a sniper killed the man. People were too frightened to carry him away, and his body decomposed on the road.


“What happened to my family is not rare,” she says. “It’s happening all over Syria.”


Some of the relatives are seeking political asylum in the United States.


Last month, Barré drove more than an hour to attend a town hall event for Bush. After he spoke, Bush took questions from the audience. Barré stood up.


“I’m Syrian-American. I have 14 family members that just left Syria. Their house was bombed. I’ve been supporting them the last five years just to eat, and I just got them to Turkey.”


She started trembling, then came the tears.


Bush praised Barré for helping her family, called Assad a brutal dictator and promised to provide support for the thousands of refugees.


Afterward, he gave Barré a hug. The video and photo were picked up by news organizations throughout the world. Bush even made a campaign video about the encounter.


Barré hopes her words will resonate across the globe.


“I never expected to be on TV. This attention is all a surprise to me,” she says. “I would like to be a voice for those who are not heard.”


She is advocating two things: a safe-zone in Syria so people can live without danger and more acceptance of Syrian refugees in America and other countries.


“I love the United States,” she says. “The freedoms we have here are golden – just to be able to walk and not fear for my life or express myself and not get killed. I don’t take that for granted. I want others to experience those same freedoms.”

Jeb Bush with Nora Barré, a Syrian-American who will speak at the University of Rhode Island Nov. 18 for International Education Week. She lives in New Hampshire, but would like to move back to Rhode Island one day. Photo by Nancy Lane of the Boston Herald.


Nora Barré and her husband, Luke, and their daughter. Photo courtesy of Nora Barré.