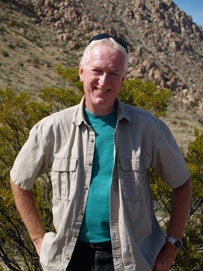 KINGSTON, R.I.– November 12, 2015–In the dry heat and blazing sun of New Mexico’s desert, a tough native plant has been the focus of a former University of Rhode Island professor’s research for three decades. Keith Killingbeck, professor emeritus of biological sciences at the University of Rhode has been studying the Ocotillo plant for much of his adult life.


To local media, Killingbeck is known as the go-to-guy for questions about fall foliage, so why an interest in a plant in the desert? Killingbeck’s interest in the plant grew during his first sabbatical at New Mexico State University and continued through his 36 years teaching at URI and his tenure as the associate dean of the Graduate School. After retiring in May 2015, Killingbeck can focus on puzzling plants and his love for playing ice hockey.


“As I kid I would play pond hockey in Michigan and played intramural hockey through my undergraduate and graduate careers,” said Killingbeck. 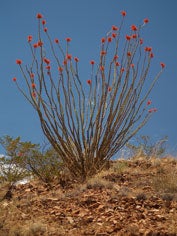 When the Boss Arena at URI opened its doors, Killingbeck was one of the first ones on the ice where he plays weekdays during public hockey from 1 to 3 p.m. with college students and hockey lovers of all ages.


“It is important to have a time to focus on something else other than what consumes us all day. Hockey has been that outlet for me,” said Killingbeck. “If I didn’t have hockey, I would miss that competition and comradery in the locker room with the other players. It’s always a good group, good hockey, and good fun. It really brings a smile to my face.”


When his blades aren’t on the ice, his eyes are on the Ocotillo plant. Ocotillo plants are indigenous to the Sonoran Desert and Chihuahuan Desert in the Southwestern United States (southern California, Arizona, New Mexico, western Texas), and northern Mexico (as far south as Hidalgo and Guerrero).


Referred to as coachwhip, candlewood, slimwood, desert coral, and Jacob’s staff, the Ocotillo is not a true cactus. For much of the year, the plant appears to be an arrangement of large, spiny dead sticks, although closer examination reveals that the stems are partly green. With rainfall, the plant quickly becomes lush with small (2–4 centimeters), oval leaves, which may remain for weeks or even months. 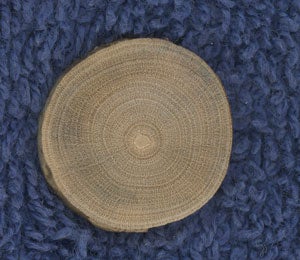 Killingbeck’s first trip to the desert in the 1980s sparked a fascination about the ecology of plants growing in extreme environments. Since then, Killingbeck has lived in New Mexico three separate years while on sabbatical.


“ At URI and in Kansas, where I completed postdoctoral, I worked on conservation of nutrients through a process called resorption. With these plants, we are measuring the movements of nutrients such as nitrogen and phosphorus by collecting fully green leaves and senescent leaves. Timing of leaf production and leaf ‘death’ is controlled by rainfall and temperature rather than daylength,” said Killingbeck.


In other words, these plants are unlike those found in New England, where growth and dormancy strictly follow the seasons. Ocotillo can produce, and lose leaves much of the year.


“I’ve used pantyhose to catch falling leaves before, so I knew I could capture senesced leaves before they fell to the ground and became contaminated with soil nutrients. I’ve also had an ocotillo stem out of the 1,600 I study that hadn’t produced a flower in 13 years, even though a plant only a meter away was producing them. Then in the 14th year that stem produced a flower. It shows how unpredictable the plant is and why we still have so many questions,” said Killingbeck.


Climate is a definite factor in the plant’s life. There are identifiable growth rings in the inside of the stems of the plant, which is rare for a desert plant. These rings and the effect of changes in climate could give scientists a better understanding of desert plants.


Killingbeck and other scientists hope their findings become a baseline for nutrient resorption in plants. Such research could help provide a richer understanding of plant growth and longevity. It could also help expand the understanding of other plant species, as well as the effects of climate change on plants.


Killingbeck is grateful to the University for allowing him to pursue the mystery of the Ocotillo plant in sites far removed from Rhode Island.


“My research career in New Mexico began when URI allowed me to do a faculty exchange with a professor from New Mexico State University who wanted to teach in New England during one of our spectacular fall seasons. We traded places in a fall semester, then my sabbatical in the spring semester allowed me to spend an entire year in the desert. I now travel once a year to study there,” said Killingbeck.


As for how much longer Killingbeck will be working on this project, he laughed and said, “Probably forever. No but seriously, it probably won’t end for me.”


This release was written by, Rachel Smith, graduate assistant writer for the Marketing and Communications Department.