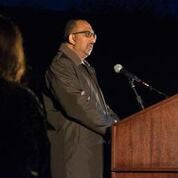 KINGSTON, R.I. – November 19, 2015 – Amid poems recited in native tongues, a soaring rendition of the French national anthem, and a French hymn for peace, words denouncing terrorism echoed across the University of Rhode Island early Wednesday evening.


“We want to convey the strongest condemnations of these acts,” said Nasser Zawia, dean of URI’s graduate school, a biomedical scientist and founder of the Muslim Community Center in Kingston, co-founder of the Islamic School of Rhode Island and founding member of the Rhode Island Council for Muslim Advancement.


He joined other speakers and performers and more than 1,000 faculty, staff and students for URI’s Vigil for Peace and Remembrance on the Quadrangle of the Kingston Campus. The French Section of URI’s Department of Modern and Classical Languages and Literatures organized the program. 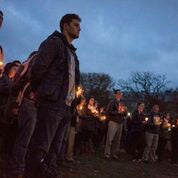 An American citizen and renowned Alzheimer’s disease researcher who was born in Yemen, Zawia said Muslims are completely against such abhorrent crimes.


“ISIS has killed about 100,000 Muslims,” he said as the soft glow of candlelight illuminated the faces of the crowd. “These are enemies of humanity. We Muslims living among you have nothing in common with these people. We have the same values as you. Everyone (in Rhode Island’s Muslim community) is shocked by these events.”


He said he has many colleagues and friends in Paris, and that he was deeply troubled and hurt by what is going on in that great city. 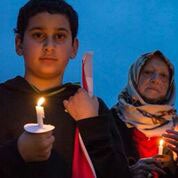 
“I want to thank all of you for gathering together as a community,” Dooley said. “This gathering has more power than you may know. This is the best way to overcome the hatred and horrors occurring in the world. We can collectively create a world where we no longer have to confront events like this by affirming our community and that all lives matter. We want to be a place where everyone is respected and cared for. Our community will not be defined by anger and fear, but by hope, trust, friendship and peace.”


Gitahi Gititi, professor of English, film and media studies, and African and African American studies, discussed terrorism and violence in Africa, including last April’s attack on a Kenyan university that resulted in the death of 147 students and scores of wounded, and many other incidents of terrorism and genocide across the continent.


“My country of birth (Kenya) is very well acquainted with violence,” he said.


Nicolai Petro, professor of comparative and international politics, recited and translated a Russian poem in memory of the victims of the Russian plane explosion in Egypt.


Winifred Brownell, dean of the College of Arts and Sciences, closed the program by mentioning that this is International Education Week at URI. She told the crowd that through URI’s international classes, study-abroad programs and its student and faculty exchanges, “We learn about other nations’ cultures, people, values, customs, histories, religions and so much more. We have hope that thanks to international education, our students will help create a better and more peaceful world. And our understanding deepens.


“So I ask you now to observe a moment of silence, and then extinguish your candles, and then let’s get on with creating that better world.”

Pictured above
Nasser Zawia, dean of URI’s graduate school, a biomedical scientist and founder of the Muslim Community Center in Kingston, co-founder of the Islamic School of Rhode Island and founding member of the Rhode Island Council for Muslim Advancement, speaks at the vigil.
Photos by Nora Lewis