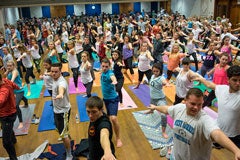 KINGSTON, R.I., Nov. 19, 2015 – The peanut butter paste that helps save the lives of malnourished children worldwide was served up at the University of Rhode Island this week, thanks to yogis.


The Rhode Island nonprofit Edesia handed out samples of Plumpy’Nut at the Memorial Union on Tuesday, and spread the word about one of the most pressing global issues today: childhood malnutrition.


URI students responded with compassion and came away with a better understanding of what it’s like for the world’s most vulnerable to go without proper food.


“You see so many kids who are suffering because they’re hungry,” said sophomore Karissa Kairo, of Johnston. “It’s so important to know what’s going on in the world, not just in America.”


Edesia was the guest of Lauren Toracinta, a 2006 URI graduate and owner of the Rhode Island Yoga Center, and Kerry Donovan, a senior from Newport. The two wanted to do something for Greek Philanthropy Week that combined their love of yoga and community service. 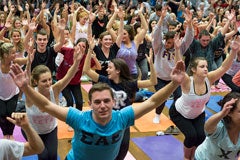 They organized a yogathon – held Tuesday night – which attracted more than 300 people and raised about $1,350 for Edesia. The nonprofit was so grateful for URI’s support it set up a booth with brochures and free packages of the vitamin-fortified Plumpy’Nut.


“We’re so thankful to the students,” said Elizabeth Atalay, digital and social media specialist at Edesia. “It’s incredible to get students involved. This is the next generation, the people solving global issues.”


The yogathon was a fun way for students to exercise – and do something meaningful for others. Beginners and longtime yoga enthusiasts crowded into the Union’s ballroom to stretch, bend and breathe – deeply. Toracinta was the instructor.


Donovan is graduating in December with a degree in marketing, but hopes to pass the project on to one of her sorority sisters. “I think we need a bigger space and more mats. It’s such a great way to raise money for a good cause.”


Toracinta, a former member of Alpha Chi Omega, would like to host another event: “We were overflowing out of the ballroom. It was awesome.”


The Edesia booth was also a hit.


Throughout the day, students stopped by the table to taste Plumpy’Nut and ask about the nonprofit, which is based in Providence and moving to Quonset Business Park in North Kingstown next year as part of an expansion plan.


Before-and-after photos of children were especially moving for some.


“Seeing the progress of these children after they eat Plumpy’Nut is amazing,” said Kairo. She even ripped open one of the foil packages and tasted a sample. “Good,” she declared. “I can see why the children like it.”


Some 220 million children suffer from malnutrition, a malady that not only kills, but also causes serious health problems, like stunted growth. Since opening in 2010, Edesia, the only manufacturer of Plumpy’Nut in the United States, has touched millions of children from Chad to Pakistan.


One of the remarkable things about Plumpy’Nut – a blend of peanut butter, milk powder, vegetable oil, sugar, minerals and vitamins – is that it does not need to be refrigerated, a plus for developing countries. No preparation is required, and it has a long shelf life.


Donovan, of Newport, first heard about Edesia through the #MakeYourGreenCount social media campaign created last March by URI public relations students. Many of Donovan’s sorority sisters at Chi Omega joined her at the Edesia booth.


“We’re blessed to live in America,” said senior Natalie Weisfeld, of Houston. “For some people, a big problem is their cell phone died. People in other countries don’t have food. We have to remember we’re very lucky.”


Other events during Philanthropy Week include:


* “Quad Collection,” today, Nov. 19 from 10 a.m. to 3 p.m. Donations of toothpaste, razors and other toiletries, as well as non-perishable food, will go to Rhody Outpost Emergency Food Pantry at St. Augustine’s Church.


With the exception of the yogathon, all money raised during Philanthropy Week will go to the Harry Amaral Memorial Scholarship Fund, which provides financial support to Rhode Island students in the state’s Department of Children, Youth and Families Secondary Tuition Assistance Program. Amaral was the enrollment services director at URI until his death in 2010.


University of Rhode Island students participate in a yogathon Tuesday, Nov. 17 to raise money for Edesia, a Rhode Island nonprofit that makes Plumpy’Nut, a peanut butter paste hailed as a miracle food to fight childhood malnutrition.