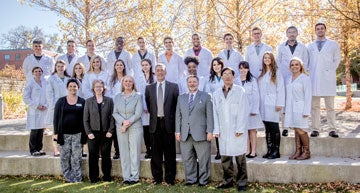 KINGSTON, R.I. – November 19, 2015 – An Amgen Inc. executive told 30 University of Rhode Island biomedical science students that they are in the right field, given the research and development trends of the 21st century that include gene sequencing, neuroscience and major advances in drug development and delivery.


Ran Zheng, executive director and plant manager at Amgen Inc.’s Rhode Island facility, was one of three industry leaders who recently offered advice and congratulations to the members of the class of 2017 in the bachelor of science in pharmaceutical sciences program at URI’s College of Pharmacy. The four-year program provides students with a science and research foundation to enter the biomedical science industry or pursue graduate study in the field.


For decades, the College of Pharmacy has held a “white coat” ceremony to recognize six-year doctor of pharmacy students entering their third year—their first professional year in the major. And this semester, it was time to hold ceremonies to honor and welcome juniors into the biomedical science program. Leading up to this year, the students were completing their general education and prerequisite courses to begin courses in the major.


During her presentation, Zheng said that the 20th century was all about physics—the Wright brothers and flight, the automobile, skyscrapers and highways. It was also the century of technology, television, computers and telephones.


“But the 21st century is turning into the century of biology, including big data that led to gene sequencing,” she said. “You students are in the right place at the right time. During the next two years, you will be laying the foundation for great opportunities.”


Zheng joined Laurie A. Hanson, an executive director at Pfizer, and Vincent Mancinelli, president of Rhodes Pharmaceuticals, as the keynote speakers.


“It is exciting that our BSPS program has formed partnerships with many pharmaceutical companies, where the majority of our students are hired,” said Bingfang Yan, professor and chair of the Department of Biomedical and Pharmaceutical Sciences. “This event is the first of its kind. We had leaders from Pfizer, Amgen and Rhodes Pharmaceuticals speaking to our students.”


“The students attending reported that they appreciated seeing there were many paths toward careers. Each speaker emphasized a variety of paths and opportunities,” said Roberta King, an associate professor in the College of Pharmacy.


Cody Anderson, who will graduate from the program in 2017, said, “It was great to see how many career possibilities were available to me immediately after graduation. The speakers were also incredibly supportive of my going to graduate school and shared that there may be opportunities for them to invest in my education. After listening to the speaker from Amgen, I think I’m going to start following the biologics industry more closely.”


The students and their hometowns are: