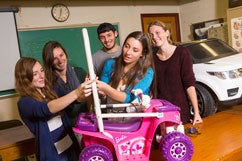 
Thanks to physical therapy and biomedical engineering students at the University of Rhode Island, local boys and girls with mobility challenges will soon be cruising in Range Rovers, Mario Go-Karts and Barbie jeeps.


The students are teaming up to modify toy cars for children with disabilities. The goal is to help the kids enjoy the same activities as their peers – and be more independent.


If all goes as planned, six children, ages 17 months to 6 years old, in Rhode Island, Massachusetts and Connecticut will receive cars in the Lil’ Rhody Riders program, possibly before the holiday season.


“These kids just want to have fun, like any kid,” says Sandra Maliangos, project co-founder. “They can do what their friends do if you give them the right tools.” 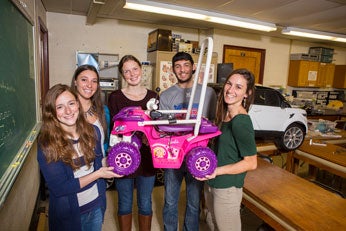 A few months ago, Maliangos and Coral Hines – doctoral students in physical therapy – heard about Go Baby Go, a program at the University of Delaware that alters cars for children.


They decided to launch a similar program in Rhode Island for their department’s leadership project. Two hurdles: They needed money to buy the cars, and engineering expertise.


The two launched a crowdfunding site and quickly raised $1,200, enough to buy cars for children who have mobility impairments from conditions like cerebral palsy, fibrosarcoma and chromosomal abnormalities. “We were ecstatic,” says Maliangos. “People were so supportive.”


Next, the students reached out to URI’s biomedical engineering department to find out if anyone would be interested in whipping the cars into shape. The response: You bet.


“We realized we were a little bit over our heads,” says Maliangos of Warwick. “We also thought it would be a good idea to work with another department. The more hands the better.”


Katie Brown of North Kingstown, Zach Campo of South Kingstown and Cara Nunez of East Greenwich – all seniors majoring in biomedical engineering – signed up for their capstone engineering design project.


“This project is a wonderful marriage of two URI departments,” says Ying Sun, of West Warwick, professor of biomedical engineering and the engineering students’ supervisor. “It shows how engineering technology can benefit the community – and children with disabilities. We’re very proud that our students, at the beginning of their careers, are working on such a meaningful program.”


The cars are being tailored to meet individual children’s needs. Through simple rewiring, a red button on a steering wheel might replace a gas pedal. A joystick could work as a steering wheel. Fasteners and railings on a seat will keep a child’s head upright. And some cars might have bars in back that parents can grab if their children take off.


Students are also installing ultrasound sensors under the control of a microprocessor that would automatically shut off the car if it gets too close to a wall, tree or other object. “Safety is a priority for us – and the sensors do the trick,” says Campo. Also, the team is working on a way for parents to control the car remotely, in case it needs to be stopped immediately.


“It’s especially gratifying to know that the work we’re doing is directly helping these children,” says Nunez. “I like seeing other people benefit from my work – and be happy. It’s part of the reason I’m a biomedical engineer.”


Brown says the project is challenging and immensely rewarding. “Each car is unique. We can’t make just one car for everybody. Doing a project that I know will help children – and make their day – is very fulfilling.”


Hines, of Jamestown, says the cars can boost the children’s self-esteem: “When you’re a toddler feeling like you’re in control is important. These cars empower them with confidence – where they go, who they play with.”


Parents found out about Lil’ Rhody Riders through word of mouth and the program’s Facebook page.


“Right now, she can’t walk, sit or crawl,” says Dunne. “She can scoot on her back. That’s her only means of independent mobility.”


Playing inside with friends is manageable, but in the outdoors she often feels isolated. “If people are running around outside she can’t participate,” says Dunne. “It will be really cool for her to get in on the fun, not having her mom pushing her around. She’s very smart, she has a lot of personality and she likes participating with other kids. This will give her that chance.”


And Kate will probably have no problem behind the wheel. Dunne says her daughter knows that pressing buttons make things go. “And that’s just fun.”


The students are still accepting donations to modify more cars. To contribute, contact the students through the program’s Facebook page.


Brown, Campo and Nunez hope to present a paper and poster about their work at the Senior Design Competition of the Northeast Bioengineering Conference at SUNY, Binghamton, in the spring.