for Harrington School of Communication and Media


KINGSTON, R.I. – November 6, 2015 — A $6.3 million renovation of Ranger Hall will give the University of Rhode Island’s Harrington School of Communication and Media a cutting-edge facility in which students can gather, learn, study and present their work, while setting the table for the school to adapt to the rapidly evolving nature of new media and mass communication. 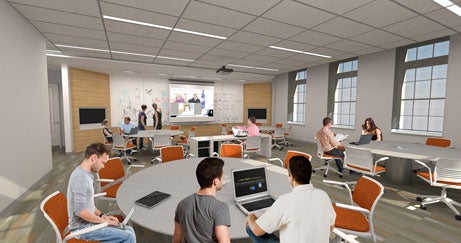 “Ranger Hall will have all of the cutting-edge technologies necessary to keep our students at the forefront of mass media and communications, but it will really serve as the heart of the Harrington School,” said Donald H. DeHayes, provost and vice president for Academic Affairs. “The learning and gathering spaces inside this building will give students the tools they need to prepare for rapidly changing and multifaceted careers.”


The University launched the 8,800-square-foot project with a ceremonial wall breaking today at 11:45 a.m. on the quadrangle near Ranger Hall. Rather than using shovels at a groundbreaking, DeHayes, Winifred E. Brownell, dean of the College of Arts and Sciences, Michael D. Moore, senior vice president of communications, Thomson Reuters Corp., and Stacie Belizaire, an undergraduate student in the Harrington School, used sledgehammers to destroy a ceremonial wall outside Ranger Hall.


“It’s not technically a groundbreaking, since we’re renovating an existing building. So we had this notion that it would be great to have selected people break down a ceremonial wall, since there will be a lot of that going on,” said Thomas R. Zorabedian, assistant dean of Arts and Sciences.


Phase one of the building’s renovation will focus on turning the first floor of Ranger Hall into a hub for the six programs in the Harrington School of Communication and Media – communication studies, film/media, writing and rhetoric, journalism, public relations, and the Graduate School of Library and Information Studies. The building is expected to be ready during the 2016-2017 academic year, giving potential and incoming Harrington School students immediate access to the state-of-the-art facility.


“Thanks in large part to Dick Harrington, managing partner of the Cueball Group and our major benefactor, we are establishing phase one of the Harrington home by serving students first. Dick urged us to create a central facility with the technology, tools, and learning spaces that foster collaboration and create synergies to prepare graduates for the rapidly changing needs of communication and media in the 21st century. He continues to make our dreams come true,” Brownell said.


While Ranger Hall will be the new Harrington hub, the school’s undergraduate and graduate programs will still be housed in several buildings across campus, including Swan, Rodman, Roosevelt and Davis halls.


“We’re a large school with more than 1,500 students and 165 full- and part-time faculty, so we’re not going to easily fit into any one building, but it’s a home,” said Adam Roth, interim director of the Harrington School. “Everyone needs a home where they can be connected to their peers, a central place that fills the critical needs of students, whether they’re social, educational, institutional or academic.”


The project will create 11 rooms on the first floor, including active learning classrooms, three audio/video editing suites, an audio recording studio, a film screening room, a social media innovation lab, a media equipment resource center, and advising center and a living room for students, faculty, alumni and guests to gather.


The 1,100-square-foot living room will be equipped with monitors, a projector and screen, making it a versatile, comfortable space, where students can present their work in a variety of media. Campus organizations and professionals will also use the space to present public lectures.


The active learning classrooms will help students hone their writing skills and flex their creative muscles, while the social media innovation lab addresses perhaps the most direct need of students entering the field of mass communications.


“When we speak to professionals in the field through our executive board, they tell us the skills students need and they all stress that students should be able to write, speak clearly and think creatively,” Zorabedian said. “Relatively recently, they have begun to say that all students should know how to create or maintain a website and/or a social media presence. The fields within communication and media are evolving so rapidly that our challenge is to prepare students for careers that not only exist now, but also for those that may emerge four or five years from now.”


Roth said the refurbished facility will help the Harrington School remain nimble as it prepares students to enter the ever-changing world of mass media and communications.


“These are going to be cutting edge facilities that are wired in such a way as to be malleable and adaptable for the future,” Roth said. “We need to produce spaces equipped to be interchangeable as technology progresses, especially with back end wiring. This is going to significantly help us attract, prepare and train students as professionals for the future.”


Roth stressed that, for all the bells and whistles that Ranger Hall will have, its biggest asset remains the faculty that will work inside its walls and across campus. He pointed out that two former URI journalism students, Jonathan Herman, chief operating officer of Preferred Home Health Care & Nursing Services, and Adam Wiener, senior vice president of Content, Community and Operations at CBS Local Digital, helped to name the Linda Lotridge Levin Advising Center after the long-time journalism professor and department chair, who retired in 2013.


“I think naming the advising center after a professor so beloved by her students says a great deal about the wonderful mentoring students receive in the Harrington School,” Roth said.


Bathrooms and HVAC equipment throughout the building will also be upgraded, and a new elevator will increase access to all floors of the building.


Funding for the project comes from a variety of sources, including nearly $1 million designated to be used from a $5 million gift by Dick Harrington, for whom the school is named. The gift triggered the availability of state funds, and additional private fundraising also contributed greatly to the project.

Rendering of active learning classroom in Ranger Hall for the Harrington School of Communication and Marketing. Courtesy of Durkee, Brown, Viveiros & Werenfels Archtictects.