Skip to content
Talk will focus on humor and gender 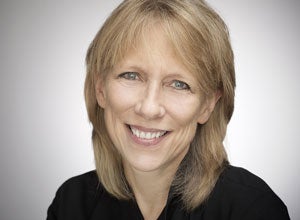 KINGSTON, R.I., Nov. 23, 2015 – It’s vintage Liza Donnelly: A man is interviewing a woman for a job. Both look professional – tailored suits, stiff collars, a briefcase. He’s holding her resume as he gazes at her across a desk.


The image in a “bubble” above him reveals his true thoughts about the woman: A little girl with a bow in her hair sitting on the floor playing with a doll.


Donnelly drew the cartoon for New York Times journalist Nicholas Kristof for a column he wrote about how men can be unconsciously biased toward women. Gender inequities and women’s rights are the longtime political cartoonist’s specialty.


She’ll bring her wit and wisdom to the University of Rhode Island Dec. 1 for the Honors Colloquium about “The Power of Humor.” Her talk about humor and gender will start at 7 p.m. in Edwards Hall, 64 Upper College Road, on URI’s Kingston campus.


Those unable to attend the lecture can watch it live online at URI Live!

Donnelly, who lives in New York, is a cartoonist for The New York Times, The New Yorker, Harvard Business Review and Forbes.com. For more than 30 years, she’s been specializing in political and cultural commentary.


She draws a weekly political cartoon for Politico Europe and Medium. She is also a cultural envoy for the U.S. State Department, traveling throughout the world speaking about freedom of speech, cartoons and women’s rights.


Among her 16 books are “Women on Men” and “Funny Ladies: The New Yorker’s Greatest Women Cartoonists and Their Cartoons,” a history of the women who drew cartoons for the magazine.


She is also director of the New York office of Cartooning for Peace, an international project that promotes global understanding and communication. Her work has been in many exhibits around the world, and she has curated exhibits of international cartoonists, here and abroad.

What do you plan to talk about at URI?


I plan to talk about the power of humor and how it can be used to discuss gender issues and global topics. We have seen how cartoons can cause violence, and I will explore why that is and how we can harness humor for good.


I have never experienced any specific discrimination that I can pinpoint for you. However, I have felt at times that my work — particularly when I draw about feminism — has not been taken as seriously. It’s better now, perhaps because women’s rights are more in the forefront of the media at the moment.

Tell us about your new gig drawing cartoons for Politico Europe.


I often travel to France and other parts of Europe — and most recently Asia — and in the last year I began to feel a desire to “speak” more globally with my editorial cartoons about women’s rights, but also other issues. What I draw for Politico Europe has to be about Europe, or the European Union, so I have to be very well read on the issues that are of concern there, even as it intersects with U.S. concerns. Our media doesn’t cover Europe in great detail, so I am reading a lot of Al Jazeera, BBC, Le Monde and others. I try to draw from the perspective of an American, which is what I am, and not draw as if I know what it means to be living in their cultures. 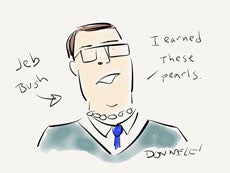 You put pearls on Jeb Bush in a cartoon you drew during one of the GOP debates. Why?


I was just teasing him, because I think he looks like his mother, Barbara Bush. No deep meaning, really. When she was in the public eye, I actually appreciated Barbara for her outspokenness.

Your cartoons about the Benghazi hearing were hilarious. Was Hillary Clinton victimized by the guys on the committee?


Thank you! I wouldn’t say Hillary was “victimized,” but the GOP committee members certainly tried to bring her down in a political way that was more than just investigatory. They were trying to trip her up, I believe, and it didn’t work. She came out of the hearings even stronger and more popular with the public, and the GOP members came away appearing not so sharp.

What is live-tweet drawing?


About two or three years ago, I got my first iPad and began to experiment with drawing apps. One day, I was watching a press conference on TV, or the State of the Union or something like that, and I began to draw what I saw, and make funny remarks to go with the drawing. It was nothing planned or overly scripted or carefully sketched, just quick visual responses. I am careful not to prepare ahead of time and rely on my instant visual take and humor to react to what I see. And with this app I love (called Fifty Three), you can tweet the drawings immediately. I did so and found the Twitter community loved them! So I keep doing them for politics, debates, awards shows, Olympics, football, soccer, non-profit PBS shows and more. Sometimes, The New Yorker or other publications will hire me and publish what I draw. Lately, I have been invited or hired to attend conferences and draw there live and promote the event.

Do you plan to do live-tweet drawing during your URI talk? Hope so.


I hadn’t planned on it, but maybe I will now that you suggest it! Thank you!


The major sponsor of this year’s Honors Colloquium is the URI Honors Program.

This year’s organizers of the colloquium are Rachel DiCioccio, professor of communication studies, and Brian Quilliam, associate dean and professor of pharmacy. For more information on colloquium events contact Deborah Gardiner at 401-874-2381 or debg@uri.edu.

For information about ways to support the Honors Colloquium, contact Lynne Derbyshire, URI professor of communication studies and Honors Program director, at 401-874-4732. If you have a disability and need an accommodation, please call 401-874-2303 at least three business days in advance.


For more details about the events, visit http://www.uri.edu/hc/.


Pictured above: Liza Donnelly, a writer and political cartoonist who will speak at the University of Rhode Island Tuesday, Dec. 1 at 7 p.m. in Edwards Hall on the Kingston campus. Her topic is humor and gender. Photo courtesy of Liza Donnelly.


A political cartoon by Liza Donnelly.