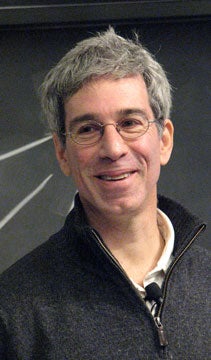 KINGSTON, R.I., Nov. 30, 2015 – Why don’t woodpeckers get headaches? Why did a guy who pricked his finger smell putrid for five years? And is it true that people who wear socks on the outside of their winter boots are less likely to slip, fall and die?


Believe it or not, scientists investigated these strange – and funny – questions, and Marc Abrahams rewarded the researchers with something just as weird: the Ig Nobel Prize, a parody of the Nobel Prize.


Abrahams will talk about science and humor during a talk Tuesday, Dec. 8 at the University of Rhode Island for the Honors Colloquium about the “Power of Humor.” His talk, free and open to the public, will start at 7 p.m. in Edwards Hall, 64 Upper College Road.


Those unable to attend the lecture can watch it live online at URI Live!

For more than two decades, Abrahams has been browsing research journals for scientific studies that are odd and creative. Besides organizing the Ig Nobels, he also edits the bimonthly “Annals of Improbable Research.”


Abrahams also writes for other publications on science, technology, medicine and other topics. He has been a commentator for ABC-TV’s “World News Now” and National Public Radio’s “Science Friday” program.


By the way, woodpeckers don’t get headaches because their brains are “packaged” in their skulls in a different way. Abrahams says their brains do not “slosh around” like human brains.


URI chatted with him recently about his work, science and amusing studies.

What do you plan to talk about at URI?


I want to talk about things — in science and in everything else — that are so surprising they make you laugh, and THEN make you think. Mostly, these are things so outside most people’s experience that they almost force you to have that reaction.

What’s the role of humor in science?


It’s built in. There’s a long tradition in America, though, to pretend that science is a very earnest endeavor — too serious to be amused at. So serious that people should take everything at face value. That’s crazy. Science is, essentially, an attitude, and a habit, of taking NOTHING at face value.

Do you think more kids will get interested in science if educators talk about the humor, as well as the significance?


Not if they talk ABOUT humor. Talking ABOUT humor tends to remove the, uh, humor of the things they’re talking about. Many things just ARE funny, if you step back and let yourself look at them, rather than nod your head and agree with the explanation that someone told you. At the moment you’re laughing with or at those things, you are also paying attention to them. And maybe you’ll even be inclined to pay a little more attention, and think about those things on your own.

You got your degree in applied math from Harvard and worked for computer and software companies. What inspired you to go into the funny business?


I think I was just born this way and then nurtured it, with lots of loving goading from relatives, teachers and friends. I collect and describe things. I don’t much make jokes about them. Reality is usually funnier than something that’s concocted.

Where do you find these odd studies? You must read thousands of journals?


I skim many sources. And every day people — scientists, journalists and all sorts of other people in all sorts of places — send me a stream of things.

Tell us about the study on why woodpeckers don’t get headaches. How about that sock-over-the boots study?


The woodpecker studies (the researchers did several) were scoffed at at the time. Dr. Ivan Schwab even then was saying that this question would help doctors understand how and why football players are so susceptible to brain damage. People in general are more inclined to think seriously about that, these days.


The socks/boots study, done on an icy, hilly city street in the city of Dunedin, New Zealand, showed that an old folk belief there probably does lead to fewer winter slip-and-fall injuries for people who wear their socks over, rather than under, their boots.

We just have to ask about this one: the brassiere that can quickly be made into a face mask.


Correction: it can be quickly separated into a PAIR of protective face masks, one for the bra wearer, and one for some lucky bystander. The patent gives construction details, and has memorable technical drawings. Dr. Elena Bodnar was a young physician in Ukraine when the Chernobyl power plant melted down. That led her, years later, to invent the Emergency Bra, which is now owned and presumably worn by women around the world.

What are your favorite studies?


The ones that grabbed my attention immediately and never let go. One of them is a study published in a pretty obscure biology journal in The Netherlands. That paper is the first scientifically documented case of homosexual necrophilia in the mallard duck. That paper led to many adventures. Another is the paper called “Unskilled and Unaware of It: How Difficulties in Recognizing One’s Own Incompetence Lead to Inflated Self-Assessments.” But these are just the edge of the tip of the iceberg. There are so very many others.

One final question: Is it true that past Nobel Prize winners hand out the Ig Nobel prizes?


Yup. Beginning with the very first Ig Nobel Prize ceremony in 1991, the prizes are always physically handed to the Ig Nobel Prize winners by people who have Nobel Prizes. They seem to look at each other in utter wonder, as if they cannot quite believe this is happening, but are very happy to be, at that instant, the center of the universe.


This year’s organizers of the colloquium are Rachel DiCioccio, professor of communication studies, and Brian Quilliam, associate dean and professor of pharmacy. For more information on colloquium events contact Deborah Gardiner at 401-874-2381 or debg@uri.edu.


For information about ways to support the Honors Colloquium, contact Lynne Derbyshire, URI professor of communication studies and Honors Program director, at 401-874-4732. If you have a disability and need an accommodation, please call 401-874-2303 at least three business days in advance.


For more details about the events, visit Honors Colloquium.

Pictured above: Marc Abrahams, editor and co-founder of the “Annals of Improbable Research.” He will talk at URI for the annual Honors Colloquium on Dec. 8. Photo by David Kessler, courtesy of Marc Abrahams.