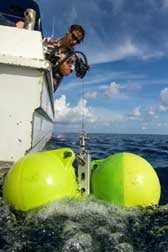 NARRAGANSETT, R.I. – December 17, 2015 – Oceanographic research expeditions can be extremely expensive undertakings, especially when the operating cost of a research ship for just one day can top $25,000. But a University of Rhode Island graduate student has figured out how to do it on the cheap and still make exciting discoveries.


Brennan Phillips traveled last winter with a research team to the Solomon Islands in the Western Pacific to investigate an underwater volcano, and he used a number of clever strategies to make his expedition as cost-effective as possible. His discoveries – and his inexpensive methods – are being reported today at the fall meeting of the American Geophysical Union in San Francisco.


“We stayed in modest bunkhouses, we worked from small boats, we negotiated discounts on some of our gear, and we even sold some of our gear on eBay after we were finished with it to break even on our expenses,” said Phillips, a native of East Lyme, Conn., who now lives in Providence and is earning his doctorate at the URI Graduate School of Oceanography.


Phillips is most proud of how he used an electric fishing reel with donated line instead of an expensive winch to lower and raise cameras and oceanographic instruments into the crater of Kavachi volcano. He also shared time aboard a rented boat with a team of scientists from Australia, and they even shared the cost to run a generator to charge their batteries.


Most of his expenses were paid by a small grant from the National Geographic Society, which also loaned him a high-tech camera that could be baited to attract sharks within view.


“That was a huge asset to the expedition at no cost to me,” said Phillips. “I basically made a cold call to National Geographic and pitched the idea, and it worked.”


Phillips also depended on the expertise and equipment of faculty and students at the Graduate School of Oceanography to help analyze some of the samples he brought back to campus at the end of the expedition. Associate Professor Katherine Kelley used her mass spectrometer to conduct an analysis of the lavas he collected from the volcano, and Professor Steven Carey used equipment in his Rock and Core Lab to examine the structure of the lavas, which provides an indication of how the volcano erupts. Student Ashton Flinders, an underwater mapping expert, used echo-sounder data to create a high-tech map of the volcano that ordinarily requires data from the sonar on a research ship.


“When you put all of these things together, we were able to do comprehensive exploration of a distant site no one had ever really studied before by using these simple, cost-effective methods,” Phillips said. “It couldn’t have turned out better.”


And just because he used cost-effective research strategies doesn’t mean he didn’t make discoveries that a well-funded scientist would be proud to report.


“What was most surprising was that fish and sharks swam right through the bubbling hot water in the volcano,” said Phillips, who now jokingly calls his research site the shark-cano. “And in the crater, our cameras caught images of schools of sharks, smaller fish and even jellyfish living in the hot acidic plume. This presumably toxic environment supports a whole community of life, even though every once in a while it blows up.”


From the lava rocks he collected, Phillips has also gleaned insights into the geological processes happening deep inside the Earth to drive the volcano’s frequent eruptions. And he has learned that the bacteria on the lavas live by consuming chemicals that seep from the volcano.


“All this data is helping me build a really interesting hypothesis of what’s going on there,” Phillips said.


But beyond the scientific discoveries Phillips has made, he said his cost-effective research strategies may provide developing nations with ideas about how to conduct scientific research in their waters without breaking the bank.


“They can perhaps look at my project as an example of how to conduct research for a reasonable amount of money,” Phillips concluded. “You don’t need a 250-foot research vessel to answer every oceanographic question.”


Pictured above
Brennan Phillips launches a deep-sea camera and oceanographic instrument to record images and collect data down to 2,000 meters. Photo by Alex DeCiccio