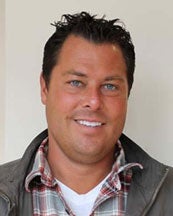 KINGSTON, R.I., Dec. 4, 2015 – For nearly two decades, Keith Labelle has been educating students at the University of Rhode Island about sexual assault and domestic violence.


As assistant director of the Bystander Intervention Program and URI-STANDers internship group, Labelle has trained hundreds of young men and women on campus about relationship violence – and how to prevent it.


His work has been recognized on campus and beyond, and now the 37-year-old Narragansett resident has another honor to add to his accomplishments.


Labelle was one of 30 people selected throughout the country to be trained as a faculty member for the National Center for Campus Public Safety.


He’ll spend Dec. 7 through 11 in Scottsdale, Arizona learning even more about sexual aggression, and that training will allow him to train others at colleges throughout the country.


“I’m humbled,” says Labelle, whose program is an integral part of the URI Office of Community, Equity and Diversity. “URI has always been a leader in campus sexual assault prevention and response. Now, we’ll be at the forefront of training other schools about how to prevent and handle sexual assault cases.”


He’ll take classes on correcting misperceptions about sexual assaults, including blaming the victim for any type of behavior. He’ll also take seminars about gender violence, signs of sexual abuse, how to sensitively ask questions to victims during judicial hearings and more.


For years, Labelle has been speaking to national groups, including the NFL. With the additional training, he’ll give even more talks as a representative of the center, which was created two years ago by a White House task force charged with combating sexual assault on college campuses.


“Collaborating with the center takes my work – and passion for preventing gender violence – to the national level on a larger scale,” he says. “I’m thankful for this opportunity and very proud to represent URI.”


Labelle grew up on a farm in South Dartmouth, Mass., with pigs, cattle and corn. He excelled at baseball in high school, jumping at the opportunity to play third base for the URI Rams.


As the team’s captain his senior year, he joined “RAM Choices,” a student group that talked about alcohol abuse, sexual assault and nutrition. The faculty advisor was so impressed with Labelle’s public speaking and writing skills he encouraged him to stay on at URI after he graduated in 2000 with a bachelor’s degree in communications.


While working on his master’s degree, also in communications, Labelle taught URI 101 classes about sexual assault prevention. He was stunned by what he heard from some students.


“So many people came up to me later and said their sister had been assaulted, or their mom stalked – and it just clicked for me,” he says. “I could make a difference.” 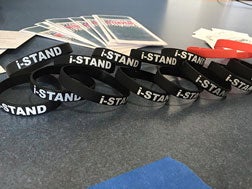 The program sends “I-Standers” – students who’ve been trained by Labelle – throughout campus to talk to other students about relationship violence, domestic violence and stalking. The “I-Standers” are women and men, including athletes and members of sororities and fraternities. Students are encouraged to speak up if they see something inappropriate.


Labelle says one of the reasons he believes his program works is that he’s a man serving as role model for other men. “As a male, my work resonates with other guys,” he says. “They see what I’m doing and think that sexual assault prevention is their responsibility too.” He also credits the support of Thompson and the 250 students who have interned with him over the years for the program’s success.


“Naomi Thompson is a fabulous ally and supporter,” says Labelle. “Thanks to her, we’re doing great things for the URI community.”


According to the National Coalition Against Domestic Violence, about 1 in 5 women experience sexual assault during their college years. Labelle says he wouldn’t want the women in his life to be among that statistic.


“We all have women in our lives we want to protect,” he says. “I have a wife, a mom, two sisters, eight aunts, dozens of female cousins and two grandmothers. I would never want to see them get hurt.”


He says he’s learned over the years that sexual assault and violence can happen to “anybody.” “It does not occur in a certain socio-economic class – that’s a myth,” he says. During his talks and classes, he implores students to “Do right.”


“We all know what that means,” he says. “Deep down, we all know right from wrong.”


What does his future hold? He might get his doctorate, possibly in education. One thing is certain: He’ll continue to spread the word about gender violence.


“Fifteen years ago, I was playing third base at URI, dreaming about making it to the big leagues. Now I’m traveling all over the country talking to student-athletes about preventing sexual violence. I feel like I’ve made it to the majors in something that matters much more than hitting a baseball. And I could not be more proud to be a member of the National Center for Public Safety’s team. URI is a leader in the fight to eradicate the epidemic of sexual violence.”


Thorr Bjorn, URI director of athletics, says he appreciates Keith’s work and is proud of his latest accomplishment: “We’re extremely lucky to not only have Keith working with our student-athletes, but also have him housed in athletics. He brings incredible knowledge and insight to a very serious issue on college campuses. URI athletics wants to serve in a leadership capacity in preventing sexual assault and having Keith work so closely with our student-athletes and staff allows us to do just that.”

Keith Labelle, assistant director of the Bystander Intervention Program at the University of Rhode Island. The program is part of URI’s Office of Community, Equity and Diversity.