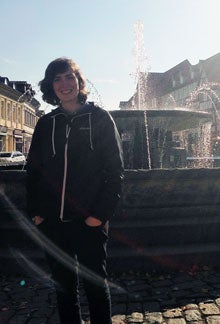 KINGSTON, R.I., December 7, 2015 – The professors are more formal, students knock their knuckles on desks if they’re pleased with a lecture, and the food, mostly meat and cheese, is much cheaper than in the United States.


Those are some of the impressions of Sarah Rheault, a University of Rhode Island student who has been studying industrial engineering at Technische Universität in Braunschweig, Germany since September.


Enrolled in URI’s five-year International Engineering Program, Rheault expects to crack the books all semester, then do an internship in the spring.


Last April, Rheault, of Wakefield, made headlines after winning a grant from the Beatrice S. Demers Foreign Language Fellows fund to study a foreign language overseas.


Rheault is back in the news – this time as the recipient of a scholarship from the German Academic Exchange Service, or Deutscher Akademischer Austauschdienst, also known as DAAD.


URI recently chatted with Rheault about what it’s like to live and study in Germany – and whether she’s adjusting to all that bratwurst and Limburger cheese.

How are your classes going?


I’m taking four courses: two German language courses and two engineering courses. The German courses are a conversation course and an intercultural partnership course, in which each American student gets partnered with a German student and we meet once a week and do things together. As for the engineering courses, one is taught in German, “Total Lifecycle Management,” and the other is taught in English, “Automotive Production.”

What’s the big difference between a German classroom and an American one?


One quirky difference is that at the end of large lectures in Germany, students applaud the lecturer, but instead of clapping they knock their knuckles on the desks. After my first lecture I was a bit surprised by the sound of 300 students’ knuckles thundering in the lecture hall. I might say that the barrier between professors and students is a little starker. Students behave extremely formally toward professors, and it’s not as normal for students to become friendly with professors.

Do German professors have a different teaching style?


Not really. Just like in the United States it seems like every professor has his or her own style.

It must be great to immerse yourself in the language and culture. Is your German improving?


Definitely. Between the two German classes and the three-week intensive language course we did before the beginning of the semester I have absolutely noticed an improvement in my German skills.

Where are you living? Are you making lots of German friends?


I’m living in a student dorm at the university. Not many German students live in the dorm. It’s mostly international students. However, I am participating in a program that puts me in contact with various Germans looking to improve their English. We meet for coffee and speak a mixture of German and English together.

Where are you doing your internship next semester?


I have my interview this Friday with Viessmann, an international company in the heating and cooling industry. My first choice for the internship is Deutsche Bahn, Germany’s top rail transport provider, but it’s a bit more difficult to get an internship with them. Either way nothing is set in stone yet.


I am a little homesick but, for the most part, I’m too busy to be homesick. With so many new things to see and do I don’t have a lot of time to sit around and miss home. My parents and brother are visiting for Christmas.


The food is great! Lots of breads, cheeses and meats. Think sandwiches. All in all, it’s not too different from the United States in terms of what you can find in the supermarket, except for the fact that everything is ridiculously cheap here.


Pictured above: Sarah Rheault, of Wakefield, a University of Rhode Island engineering student who recently received a scholarship from the German Academic Exchange Service, or Deutscher Akademischer Austauschdienst. Rheault is studying at Technische Universität in Braunschweig, Germany.