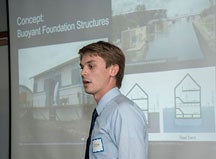 KINGSTON, R.I., — Dec. 22, 2015 — Scientists project sea levels to rise 3 to 5 feet in Rhode Island by 2100, and that could imperil the state’s largest fishing port and critical transportation hub for Block Island: the Port of Galilee.


University of Rhode Island students have some ideas on how to protect the port and keep it out of harm’s way during storms.


Their work culminated in eight projects presented to state planners, policymakers and other coastal and environmental experts Dec. 18 at URI’s Coastal Institute. Austin Becker, who co-taught the class and is assistant professor of Coastal Planning, Policy and Design at URI, says the projects should spark discussion about a community that has a history of devastating hurricanes. 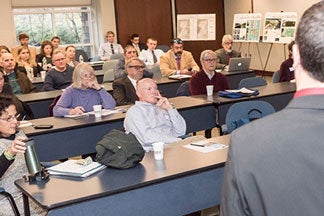 “Climate change may be the biggest environmental challenge that modern civilization has ever faced,” Becker says. “Like many coastal communities, the Port of Galilee is vulnerable to storm damage and sea-level rise that will become much more pronounced in the coming decades. It’s low-lying; it’s exposed. The breakwaters that create the Harbor of Refuge will help reduce wave action, but will not protect it from strong storm surges such as those during the hurricanes of 1938 and 1954.”


William Green, the other instructor and chair of URI’s Landscape Architecture Department, hopes the projects will play a key role in future policy decisions involving the port.


“The challenge for students was to design and illustrate possible solutions to conditions that are beginning to change and cause great concern,” Green says. “While 2100 seems quite far off, the port is already at risk. Now is the time to bring the discussion and ideas to the table.”


The projects range from constructing floating buildings and a “living breakwater system” to installing walking paths through nearby wetlands and rebuilding the dunes at Salty Brine State Beach.


Beau Doucette of Wilmington, Vt., and Doug Stonis of North Attleboro, Mass., borrowed ideas from the recent “Rebuild by Design” competition in New York and New Jersey and suggested retrofitting the existing breakwater by creating a “living” breakwater of reef balls, grass plantings and eco-friendly concrete. Not only would the breakwater provide new ecosystem habitat, it would offer learning opportunities for researchers, recreational divers and school groups.


The floating Galilee project—proposed by Joshua Bourgery of Blackstone, Mass., and Alec Mihailides of North Kingstown—suggested floating docks and buildings. Buildings would be constructed on cement foundations, but would float during floods.


Communities in Norway are experimenting with floating buildings, as well as towns in Louisiana, he says.


“It’s unique in Rhode Island,” says Bourgery, who will graduate in the spring with a bachelor’s degree in landscape architecture. “We’re a small state, but we have the support of local and state governments that give us feedback on projects. That’s not something you see at a lot of colleges.”


Students did not limit their ideas to design alone. One group developed a “policy tool kit,” called A Guide for Resiliency Planning in the Port of Galilee. Nelle D’Aversa of Providence, Mary-Kate Kane of Narragansett and Kristina Niemeyer of West Warwick came up with proposals for planners and policymakers that would help prepare the port for changes from climate change.


“These students took on some very big, very complicated land use and design challenges,” says Becker. “Many of these students will likely go on to devote much of their careers to the implications of stronger hurricanes and sea-level rise along our nation’s coast.”


Funding for the project was provided by The Spartina Fund at the Rhode Island Foundation in coordination with the University of Rhode Island’s Coastal Resources Center and Rhode Island Sea Grant and the state Department of Environmental Management, which manages the port.


Here’s a summary of other projects:


* A Fisherman’s Tale: Bridging the Past and Present for the Future. Zaire Garrett of Washington D.C., and Antonio Rosedorne of Johnston, E.J. Sauer of Monmouth Beach, N.J, and Ka Ying Yang of Providence. The project focused on creating efficient parking areas, educational opportunities, a museum about Galilee’s history and a walking path through the wetlands.


* Green Infrastructure: System-wide Approach Toward Filtration. Chris Paul of Medway, Mass. The project involved a series of connecting retention basins and bioswales that collect and filter stormwater runoff before it gets into Narragansett Bay.


* Public Circulation. Antone Almeida of Lisbon, Conn., and Julia Miller of Kingston, explored improvements to attract tourists that would not interfere with commercial fishing activities. Proposals included better stormwater management, safer street design, an elevated trail through the wetlands and a parking garage with a café or other public space on the roof.


“It was a great experience working with students from other fields,” says Almeida, also majoring in landscape architecture. “I don’t think a lot of schools offer that kind of collaboration. It’s a great way to come up with new ideas.”


Miller agrees: “We’re really excited about the feedback we got at the presentation. We put a lot of time and research into the project.”


Galilee has a long history as an economic engine in the state. It was established as a commercial fishing port in the 1940s and is one of the largest on the East Coast, supplying fish, squid and lobster to national and international markets. It includes 38 docks and piers and about 240 commercial fishing vessels. The port is also a popular tourist destination and link to Block Island, with tens of thousands of people using the ferry every year.


Two years ago, the U.S. Economic Development Administration invested $2.9 million in the port to make much-needed repairs of a major pier and a 925-foot stretch of bulkhead from Salty Brine Beach to State Pier 3. Federal and state officials gathered at the port Monday to celebrate completion of the work. The URI student projects illustrate the importance of continuing to explore ways to ensure that the port thrives in the face of severe storms like Hurricane Sandy.


Michael DeLuca, community development director for Narragansett, says he is encouraged by the students’ proposals.


“These are all interesting and innovative projects,” he says. “It’s always great to see unique ideas come forward. The town and the state can learn a lot from the creative ideas of these young people.”


Joshua Bourgery of Blackstone, Mass., presents his project to planners, coastal experts and policymakers at URI’s Coastal Institute Dec. 18. Bourgery’s project called for building a “floating” Port of Galilee to protect the community from rising sea levels from climate change.