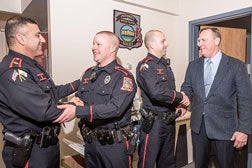 KINGSTON, R.I. – December 23, 2015 –University of Rhode Island Police Officers Michael McCabe and Salvatore Bugge faced a wrenching decision when they arrived at a motor vehicle accident the night of Dec. 5 on the Kingston Campus.


Should they wait to move the victim because of a possible spinal injury or take action because he was not breathing?


McCabe checked the pulse of Barry Blomstedt, 64, of North Attleboro, Mass., and felt none, and he also saw that Blomstedt’s chest was not moving. The victim’s car had struck two light poles and the wall in front of URI Health Services on Butterfield Road.


“Officers McCabe and Bugge recognized the more imminent danger and carefully lifted the driver out of the vehicle and placed him on the ground,” said Lt. Ken Olsen, the URI officer in charge. “They immediately began CPR and continued doing so until they were relieved by emergency medical services personnel. I arrived and witnessed them performing CPR and then we assisted EMS personnel with placing the driver on a backboard and attaching the AED (automated external defibrillator).


“I can say with certainty, that if our officers had not commenced CPR when they did, I seriously doubt that a pulse would have been regained on the way to South County Hospital,” Olsen said. “Hopefully treatment will be successful and he will make a full recovery.”


Blomstedt, who had attended the URI-PC basketball game, was transferred to Rhode Island Hospital where he was later released. He is now home with his family.


“I am very thankful to all who helped me out that night,” said Blomstedt, a URI graduate from the class of 1973. “I feel pretty darn good, compared to what I could be feeling. Now I am happy to be home with my family. URI Police Lt. Rich Moniz has called my son Andrew and me, who is now a URI freshman. That was very nice of him to check in with us.”


Things moved fast for McCabe and Bugge the night of the accident.


“People were everywhere because the game had just ended when some of them flagged me down to tell me there was a car on the wall in front of Health Services,” McCabe said.


“I made the decision to move Mr. Blomstedt out of the car because we couldn’t help him while he was in a sitting position. Sal and I lifted him out of the car and then I began CPR. He started to come to when Sal took over.”


“Mike and I have been working together since we left the police academy, and we felt we could trust each other,” Bugge said. “We know each other’s capabilities. We were feeding off each other and doing what needed to be done.”


“You never know when you are going to have to count on your partners,” McCabe said. “Our EMS does a very good job, and they responded well during this incident.”


The officers are happy that Blomstedt is recovering.


“Nothing beats having a positive impact in a case like this,” Bugge said. “Basically, our training took over.”


Olsen said he is recommending commendations for McCabe and Bugge.


“The decisive actions by Officers McCabe and Bugge exemplify the best of what is an outstanding police department,” said Maj. Michael Jagoda. “Their ability to analyze and respond to a difficult situation and then take quick action speaks volumes about their training and practical skills. We are lucky to have such fine officers serving our community.”


Public Safety Director Stephen Baker said the work of Bugge and McCabe is an example of the comprehensive training completed by URI Police.


“During the past two years, we have been focused on arming our officers, but our community should be reassured knowing that our officers are trained to respond to the widest range of emergencies. Of course, I don’t want to forget the excellent work of our student-run URI Emergency Medical Services, South Kingstown Emergency Services and Kingston Fire Department. Assistant Director of Public Safety Samuel Adams was also at the scene and was impressed by the teamwork of all of the first responders.”


Baker added, “We are very happy that Mr. Blomstedt is now out of the hospital and home with his family.”