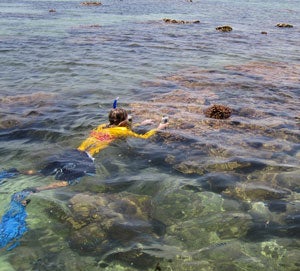 KINGSTON, R.I. – December 21, 2015 – Overfishing in the coastal waters of East Africa has had a devastating effect on the health of coral reefs and populations of reef fish, and the designation of marine protected areas in the region may not be the only solution. A University of Rhode Island scientist says that’s because broad protections like the establishment of no-fishing zones often do not target the species critical for promoting healthy ecosystems.


According to Austin Humphries, URI assistant professor of fisheries, it is important for managers to better understand the nuances of how conservation actions affect coral reef systems.


“Countless amounts of time and money have been spent on management interventions that are aimed at improving coral reef habitat and fisheries production in developing countries,” said Humphries, who grew up in southwest Virginia and now lives in Providence. “But our understanding of whether these projects are effective, and under what ecological and social contexts, is variable.”


Humphries said that coral reef conservation efforts in developing countries have been based on the assumption that marine protected areas, where fishing is prohibited, will benefit both people and nature. But he argues that this approach may be too simplistic.


He conducted a series of experiments at four marine protected areas along the coast of Kenya. He set up what he called “underwater greenhouses” at each site and grew several different seaweeds for more than a year. He used video to record what species of fish grazed on the seaweed and how those herbivores influenced the growth of seaweed.


“Seaweeds and corals are constantly fighting with each other for space, sunlight and nutrients, because both need these resources for growth and survival,” Humphries said. “Because seaweeds grow faster than corals, if there aren’t the right types of herbivores to keep the seaweed under control, then the corals will be smothered. Then you’ll have a reef no longer dominated by corals but rather by seaweeds, which often negatively impacts fish populations and thus people”


What his research found is that the health of the ecosystem depends largely on a few critical species of herbivorous fishes. In East Africa, those critical species include unicorn fish and parrotfish, which feed selectively on preferred seaweeds and algae.


“So if these herbivorous fishes aren’t there, seaweed may grow unchecked,” Humphries said.


The URI scientist said his findings have important implications for the management of coral reef fisheries.


“Just establishing a marine protected area doesn’t solve the problem of overfishing,” he said. “It could create a diverse assemblage of herbivores, but additional management activities might be necessary to aid in the recovery of individuals from critical species.”


He recommends a “targeted portfolio approach” to fisheries management in coral reefs, in which restrictions and modifications on certain types of fishing gear are implemented to ensure that key species have a better chance at recovery.


Humphries said his research, which was published this month in the journal PLOS ONE, confirms related research on coral reefs in other regions of the world, providing consensus in support of managing for key fish species that have unique and complementary roles. His next step is to study the various types of fishing gear and their influence on coral reef ecosystems.


“Saying to poor communities that are highly dependent on coral reefs that they can’t fish somewhere often doesn’t go over very well,” he said. “But if you can provide alternative solutions, like eliminating a particularly harmful type of fishing gear or modifying a gear to make it more selective, then that may be a more socially acceptable solution that also benefits the ecosystem and fisheries.”