Skip to content
KINGSTON, R.I. – December 2, 2015 – The University of Rhode Island Army ROTC Alumni Chapter honored veterans for their service and sacrifice in the military during ceremonies this month.


A special Hall of Fame induction and celebration honored the men of Rhode Island State College who distinguished themselves in the cause of freedom with extraordinary service in World War I and World War II. Family, friends and fellow alumni gathered at the Memorial Union in remembrance of the recipients.


The ROTC Chapter also honored the sacrifice of the following men who were killed while serving on active duty during the Vietnam War: 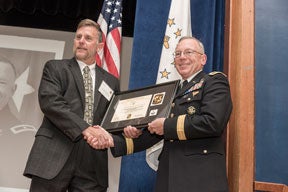 
This release was written by Caitlin Musselman, a URI Marketing and Communications intern and a public relations and political science major.