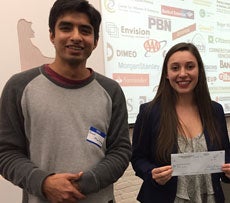 KINGSTON, R.I. – December 15, 2015 – University of Rhode Island senior Cara Nunez was confident in her speaking abilities when she walked into the Rhode Island Business Plan Competition last week. But as a participant in the Elevator Pitch Contest, she had only 90 seconds to convince a team of judges that the device she and a group of fellow students had invented could be successfully commercialized.


When she finished her pitch, she was surprised that the five judges had no questions or feedback to offer.


“I was confused. I wasn’t sure if that was a good thing or not,” said the East Greenwich resident. “I wanted feedback about how to improve, so it was a shock not to get any. But then I realized that I was the only person not to get any feedback, and that’s when I knew I did really well.”


Nunez, who majors in biomedical engineering and Spanish, received the top prize in the competition, a check for $250. She was one of 25 presenters — most from Brown University and the Rhode Island School of Design — at the event held at the Tech Collective in Providence.


“There were a lot of really great ideas and a lot of great presenters,” she said. “Some were seasoned and had a lot of experience, and a couple had already started businesses. But I have given a lot of presentations in class and knew I had the ability to speak well and get my ideas across clearly.”


Nunez pitched a business plan for commercializing a wearable eye-tracking device that can control a robotic arm. The device, created with four other students as part of a URI engineering class on the Wearable Internet of Things, taught by Assistant Professor Kunal Mankodiya, is intended to help patients with mobility-impairments accomplish daily tasks.


“One of the speakers who came to our class talked about the needs of patients with ALS,” Nunez said. “So that got us thinking about how we could create a robotic arm that could be controlled by the movement of the patient’s eye.”


They built a robotic arm using a 3D printer and then attached a pixie camera with built in tracking capabilities to a helmet. “The camera is pointed at the wearer’s eye, and if you want to move the arm left or right, you just move your pupil left or right,” she explained.


The prototype of the camera system is attached to a hockey helmet, but Nunez envisions it eventually connected to a headband or eyeglasses to make it less noticeable. She imagines the arm could be strapped to the patient or mounted on a wheelchair.


“I was really surprised when they called my name as the winner,” said Nunez, “because there were so many really great pitches. But I knew I prepared well and gave a strong pitch, and I couldn’t be happier.”


The URI student said her involvement with the project will likely end when the semester is over, but one of the students on the project team is planning to make revisions and incorporate it into his master’s thesis.


Instead, Nunez is looking toward her own next steps.


“I’m applying to grad schools and hope one day to be a professor,” she said. “I like working with students and people with new ideas, and I’m looking forward to leading my own students on projects like this one.”