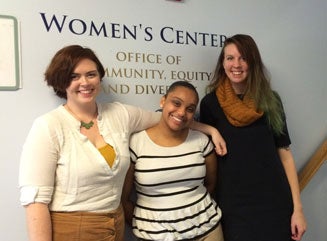 KINGSTON, R.I., Dec. 8, 2015 – When Selena Evora was a freshman at the University of Rhode Island she walked into the Women’s Center and instantly felt at home.


She was especially impressed with a student group called P.L.E.A.S.E., short for Peers, Learning, Educating and Supporting Everyone. Its mission: to educate students on campus about relationship violence and how to prevent it.


“This is an issue that affects many people, but because of cultural taboos it can be hard for people to talk about it,” she says. “I wanted to make a positive impact on campus.”


She is. During the last year, Evora and the other 23 members of P.L.E.A.S.E. have given presentations to thousands of students about gender violence. They also talk about what students can do if they see something inappropriate.


“I feel like I’m doing the work I love,” says Evora, of Pawtucket, a sophomore who is double majoring in health studies and gender and women’s studies. “I’m meant to be here. This is such an important issue, and we are all making a difference.”


The students are motivated – and highly trained. They take three nationally recognized online training courses, attend sexual assault prevention workshops, including the acclaimed Green Dot bystander intervention program. And they volunteer at the URI Women’s Center, where the group meets twice a month.


Their presence on campus is widespread. They talk to thousands of incoming freshmen in the URI 101 classes about sexual assault, interpersonal violence and stalking. They give workshops about the dangers of abusive relationships and how to help victims of sexual assault, including a two-hour “Escalation Workshop.”


Every year, members also speak to hundreds of students in sororities and fraternities and to specific classes. This fall, students gave a presentation about sexual assault to a kinesiology class, focusing on how trauma affects physical and emotional health.


The students also organize Domestic Violence Awareness Week, set up booths at the Memorial Union to promote healthy relationships and host URI’s annual Take Back the Night and Denim Day events in the spring.


“They work so hard,” says Rachel Dunham, supervisor of P.L.E.A.S.E. and office manager of Violence Prevention and Advocacy Services at the Women’s Center. “I’m so proud of them.”


Ivy Burns, a member of P.L.E.A.S.E. for more than a year, spends her days studying the ecology of plants as a biological sciences major. But she is also interested in social justice. P.L.E.A.S.E. provides that opportunity – and with like-minded people.


“The instant bonding is wonderful,” says Burns, of Jamestown. “Everyone cares about these issues. You’re in a room with people you can connect with right away, and on a topic that affects so many people.”


According to the National Coalition Against Domestic Violence, about 1 in 5 women experience sexual assault during their college years. The URI Women’s Center had been educating students about interpersonal violence since the mid-1980s.


When Burns and Evora first started giving presentations to students they were nervous speaking in public. Now they feel comfortable and confident talking to large crowds. Among the topics they discuss are healthy drinking habits, the warning signs of relationship violence and how to identify a stalker. Bystander intervention – stepping in to help in an inappropriate situation – is also part of the conversation.


“We want students to know we’re here for them regardless of their gender, race or sexual orientation,” says Burns. “We can provide them with resources and support. The more our presence is known, the more people can get help.”


Next semester, the group hopes to reach out to sororities and fraternities, as well as to the athletic department. P.L.E.A.S.E. members are also expected to strengthen their connection to residential hall directors.


“We’re always trying to expand our program to meet the needs of the campus community,” says Dunham. “The students in P.L.E.A.S.E. are dedicated and passionate about making a positive impact on campus.”


Racine Amos, coordinator of Violence Prevention and Advocacy Services at the Women’s Center, appreciates the students’ commitment and hard work.


“It gives me purpose to engage with students who are agents of social change,” says Amos. “Their extensive training will go far beyond URI. They’re our next generation of leaders.”


Students interested in joining P.L.E.A.S.E can fill out an application online. The Women’s Center will contact them for an interview. For more information, contact Dunham at rachel_dunham@my.uri.edu.