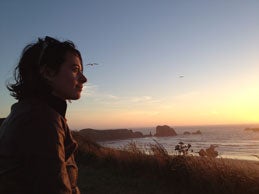 NARRAGANSETT, R.I., Feb. 22, 2016 – Carrie McDonough studies complicated things like “organophosphate ester flame retardants,” but another one of her specialties is translating that jargon into words the general public can understand.


The University of Rhode Island graduate student accomplishes that and more through her blog, oceanbites, which tackles oceanography research with clarity—and, when appropriate, a dash of humor. (Recent posts in honor of Valentine’s Day were about mating habits of lobsters and oceanic squid.)


Consider this: Since her first post in September 2013 she has gained more than 10,000 Twitter followers and 500 Facebook fans. And she says science writers and teachers in kindergarten through grade 12 regularly use the site for educational materials and story ideas. 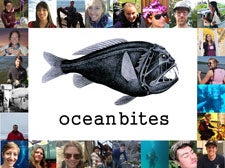 “I really believe that environmental scientists have a responsibility to explain their research to the public and policymakers,” says McDonough, a Cleveland native who is studying marine pollution at URI’s Graduate School of Oceanography. “Our site strives to increase public awareness about the amazing resources in our ocean and the serious environmental threats it faces from climate change and chemical pollution.”


Most of the contributors are students at GSO or GSO alumni, although McDonough welcomes articles from students and post-doctoral students at other institutions. Now, she has more than 20 writers, including one from Newfoundland, reflecting on the chemistry, geology, biology, ecology and physics of the oceans.


McDonough got the idea for the blog years ago after learning about another blog, “astrobites,” which focuses on astrophysics. That site was so successful she thought: Why not create one about marine science?


The topics are far-reaching, compelling and fresh off today’s headlines. There’s a different theme every month, which readers vote for ahead of time on the site. In “Sea of Love”—a shout-out to Valentine’s Day—posts were about mating, reproduction and relationships between ocean creatures. In next month’s “Spring Break” writers will focus on beaches and coastal environments.


McDonough writes about how marine pollution damages wildlife and human health and the ways that pollutants end up in the oceans. Other topics by writers include the effects of climate change and ocean acidification on the oceans and marine life, the role of the ocean in the Earth’s geochemical cycles, and the reconstruction of Earth’s past using oceanographic data.


Not only is the writing clear, it’s clever. “An iceberg couldn’t help Leo win an Oscar, but new research highlights how icebergs may help battle climate change. Read on to find out how!” says one Titanic-inspired post by URI graduate student Gordon Ober about how icebergs are actually fighting back against climate change. A post from URI graduate student Ashley Marranzino about the invertebrate chiton is irresistible: “You certainly wouldn’t guess it at first glance, but this unassuming invertebrate is pretty incredible. The armored shell of a chiton is COVERED in hundreds of tiny eyes! If you don’t find that fascinating (albeit a little weird and kind of creepy), don’t worry, there’s more.”


Special features are offered too, including interviews with scientists doing field studies in the Arctic—a three-part series called “oceanbites mingles with Arctic Mix”—and summaries of research conferences, which provide glimpses into the day-to-day work of marine scientists. The site also has a glossary.


McDonough also organizes training sessions for undergraduates who attend the GSO’s Summer Undergraduate Research Fellowship in Oceanography. Her team teaches budding scientists how to write engagingly about science for the general public. Their articles are posted on the blog in “Notes from the Undergrads”—a play off “Notes from the Underground” by Fyodor Dostoyevsky.


Environmental pollution is what keeps McDonough up at night. She’s studying how toxic chemicals make their way out of everyday consumer products like furniture, textiles, plastic toys, soaps and shampoos and end up in lakes, rivers and oceans, where they don’t degrade easily.


She’s in her fourth year of a doctoral program working with GSO professor Rainer Lohmann, whose research focuses on how persistent organic pollutants, or POPs, travel around the world.


For her dissertation, she’s measuring those chemicals in the Great Lakes region using polyethylene passive samplers—thin plastic sheets that absorb bioaccumulative compounds over time. She worked with “citizen” scientists to put the sheets at various sites on the lakes.


Now she’s analyzing the samples for a variety of chemicals, including flame retardants and synthetic fragrances, and studying how the chemical properties of these pollutants determine where they end up in the environment.


Even with her busy schedule, she finds time to mentor other scientists about the importance of clear writing. She’s chair of the ComSciCon 2016 Program Organizing Committee, leading a group of graduate students from different fields to organize workshops on interviewing, communicating with policymakers and science writing. The event will be held this summer in Cambridge, Mass.


Good science writing is also getting attention on URI’s Kingston campus. A writing program for graduate students in the sciences started in the fall, thanks to a $500,000 grant from the National Science Foundation. The program includes writing classes and workshops, with a Graduate Science Writing Center to open next year.


Oh, and by the way, McDonough reports that “organophosphate ester flame retardants” are chemicals used in consumer products like plastic toys and furniture to make them less flammable. “I’m happy,” she says, “to bring that information to the world.”


Pictured above: Carrie McDonough, a student at URI’s Graduate School of Oceanography, looking out over the Oregon coast. She is founder of “oceanbites,” a blog about the oceans and marine life. Photo courtesy of Carrie McDonough.