KINGSTON, R.I., April 3, 2017—Sexual exploitation and violence are rampant throughout the world, and academics are rightly pushing the issue into the public eye through their research and articles.

University of Rhode Island professor Donna M. Hughes is at the forefront of the movement with the launch of an online academic journal, “Dignity,” dedicated to publishing papers about sexual exploitation, violence and slavery.

The journal is the first academic journal in the world to address global sexual exploitation and well on its way to success. So far, about 9,000 people in 109 countries, from Ethiopia to Iraq, have downloaded articles since the inaugural issue in November.

More than half the women in the world have experienced some form of physical or sexual violence in their lifetime, says Hughes. An estimated 30 million people live in slavery throughout the world, she says, generating $32 billion for traffickers. Human trafficking exists in Rhode Island as well.

One of the things that makes “Dignity” http://digitalcommons.uri.edu/dignity unique is that articles can be downloaded for free to scholars—and the public. The journal is a non-profit publication hosted by the Digital Commons at URI’s Robert L. Carothers Library and Learning Commons.

Also, in the spirit of collaboration with other experts in the field, the journal not only publishes articles by scholars, but also accepts work from community organizers, advocates and service providers. The 25-member editorial board is made up of academics and professionals from around the world.

“Over the years I’ve learned that grassroots activists and service providers frequently have more knowledge and understanding about violence and exploitation—and their harmful influence on people—than the academics who often live and work at a distance from the community,’’ says Hughes, founder and editor-in-chief. “My goal is to create a journal where community activists and academics can share the same space and learn from each other.” 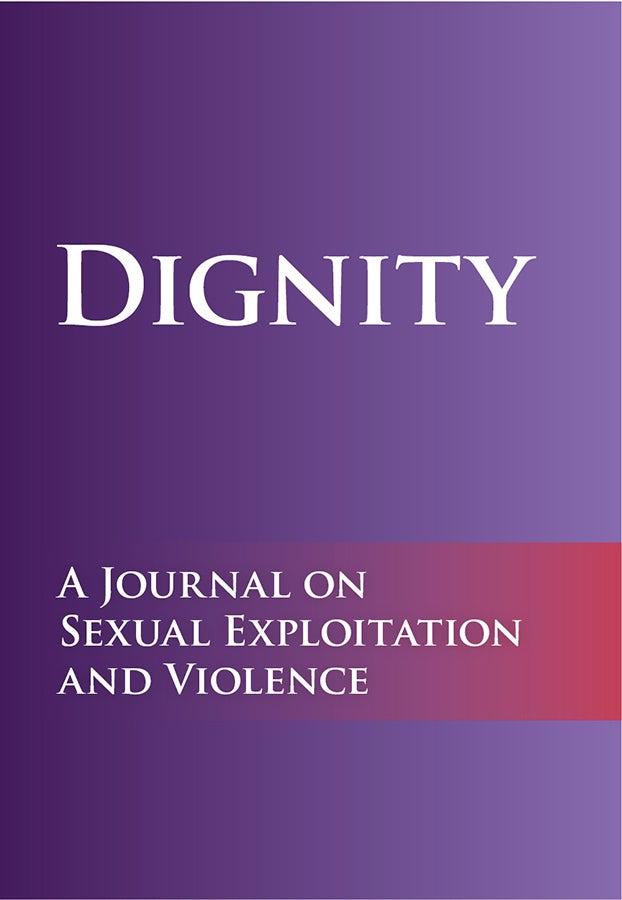 The articles cover a wide variety of topics, ranging from “Donald Trump and the Sex Industry” to “Sexual Victimization of Male Refugees and Migrants: Camps, Homelessness and Survival Sex.”

Hughes says the journal’s name is based on the universal principle that all people have the right to be valued and respected and that acts of violence and exploitation are violations of those rights.

The journal’s mission, she says, is to contribute to the global human rights movement by documenting and analyzing violations of human rights, promoting public awareness and finding solutions that restore “justice, rights and dignity to those who have been dehumanized and degraded.”

“Dignity” will also examine, Hughes says, how “uncorrected violence and exploitation of individuals undermine the love and trust of families and the security of communities.”

Another unique aspect of the journal is that it introduces a new model of peer review called “acknowledged peer review.” Submitted articles are still reviewed by the double-blind peer review system, in which the author and reviewer are unknown to each other.

The added element is that upon publication of “Dignity” articles, the reviewers are named and thanked in the acknowledgements.

Hughes, a leading international researcher on sex trafficking, is a professor in Gender and Women’s Studies at URI and holds the Eleanor M. and Oscar M. Carlson Endowed Chair in Women’s Studies.

At URI, she teaches courses on international women’s issues, human slavery and trafficking, sex trafficking and feminist theory, and she leads an undergraduate research group which conducts studies on human trafficking in Rhode Island.

Governments and non-governmental organizations frequently consult Hughes about issues relating to women’s human rights. In 2009, she was a leader in a campaign to pass three precedent-setting laws to end sex trafficking and sexual exploitation in the state.

“I’m pleased so far with ‘Dignity’ because it’s creating a place for scholars to publish their research and for professionals and advocates to describe their frontline work,” says Hughes. “The journal is already developing a global voice and reputation. I’m very pleased.”