“Rhode Island was a major player in the development of submarine warfare, beginning just after the Civil War, when an experimental torpedo facility was developed in Newport,” said Mather, a professor of history and the director of the URI Applied History Lab. “When the Navy expanded its operations in World War I, the Newport torpedo station manufactured a huge number of torpedoes, and that station had 13,000 workers and built a third of all the torpedoes used by the U.S. in World War II.”

Some of the sunken submarines in Narragansett Bay and Rhode Island Sound were sunk on purpose as part of the testing of new torpedo technologies, and one is a German U-boat sunk near the end of World War II. 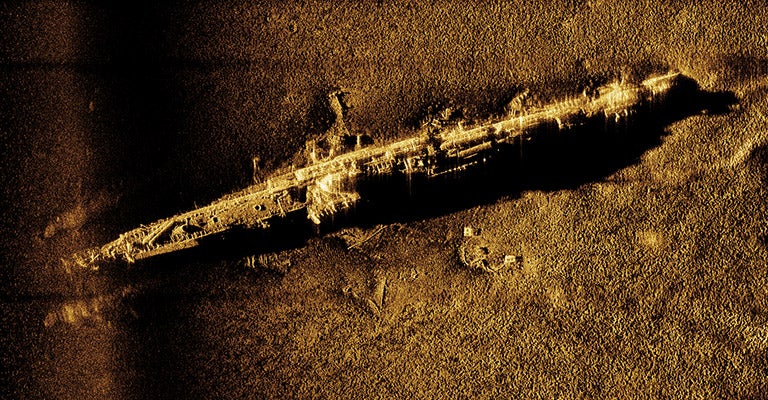 The new imagery of the submarines is helping Mather make the case that the vessels should be managed and protected by the Navy and the state of Rhode Island as a group.

“They should be thought of as a collection of submarines and managed in that way to demonstrate the emergence of U.S. undersea technology and Rhode Island’s role in submarine warfare,” he said. “Now that we have this imagery, it may be worthwhile doing a more detailed archaeological investigation of the sites. It might also be possible to nominate them for the National Register of Historic Places.” 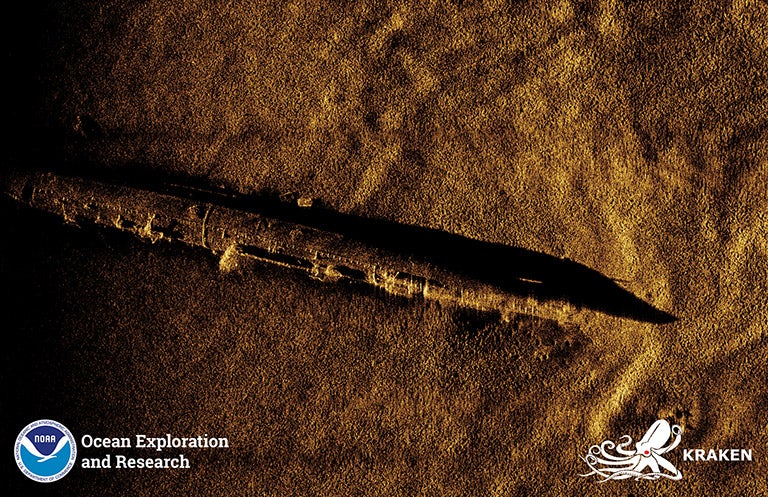 The imaging of the four sites was conducted last summer using a new technology called synthetic aperture sonar, developed by Newfoundland-based Kraken Robotics Inc. Unlike conventional sonar, the Kraken Active Towfish sends multiple pulses of sound to the same points, enabling it to collect three-dimensional bathymetry and ultra-high-resolution seabed imagery. The result is imagery of the seafloor and objects on it with 30 times more detail than generated by standard technologies.

“Through this cooperative research and development agreement between NOAA and Kraken Robotics, we were able to test this cutting-edge mapping equipment and, with our strong partnership at URI, we were able to map some historic submarines that have never been mapped to this resolution before,” said Nick Pawlenko of the NOAA Office of Exploration and Research. “It was a very rewarding project between government, academia and private business.”

During the first phase of the imaging project, three of the four submarines were mapped – the submarines USS G-1, USS L-8, and German U-853 – along with the U-853’s last World War II victim, the U.S. merchant ship Black Point.

The G-1 was built in 1911 at the dawn of large-scale submarine manufacturing. In 1913 it made a test dive in Long Island Sound to 256 feet, the deepest dive of any U.S. submarine at the time. After being decommissioned in 1920, it was used as an experimental target to test depth charge attacks on submarines. It sits in 90 feet of water off Taylor Point in Jamestown.

“It was mostly salvaged many years ago, so people assumed it was all gone, but there is still an interesting debris field there – parts and pieces – which could still make for a worthwhile archaeological investigation,” Mather said.

The L-8 was launched in 1917 and used as part of a top-secret effort during World War I to counteract German submarines. It was towed behind a decoy merchant ship to lure German submarines to attack the decoy, enabling the U.S. submarine to attack the German sub. After its active career ended, the L-8 was used in a secret Navy research program to develop a torpedo that detonated beneath a submarine rather than upon contact with the submarine. The L-8 became a test target for this new technology and was sunk at the entrance to Narragansett Bay in 1926.

“There’s a lot of that submarine still left, so it would definitely be worth taking a much more detailed look at it because of the importance of its story,” said Mather.

The U-853 and the Black Point were involved in the final act of the Battle of the North Atlantic during World War II. The U-boat sunk the merchant ship off Point Judith on May 5, 1945, and U.S. ships sunk the U-boat hours later. Both sunken vessels now serve as war graves. The new images show the U-boat largely intact but with a ruptured hull and the Black Point lying keel up on the ocean floor.

A fourth submarine in Rhode Island waters, the USS Bass, has not yet been imaged. It is located south of Block Island.

“There are no restrictions on divers visiting any of the sites now, and I don’t anticipate that would change in the future,” Mather said. “But managing the sites would involve having the Navy and the state keep a closer eye on them, monitor their degradation, and think about creating interpretive documents so people would understand them better. People are more willing to protect sites if they know more about them.”