KINGSTON, RI – April 4, 2022 — Hacking4Oceans is a new University of Rhode Island course providing students the opportunity to work with industry mentors to address world problems focused on the ocean and environment. The class is a collaboration between the URI Launch Lab, the Graduate School of Oceanography and the URI College of Business.

The URI team was supported by the Common Mission Project. Steve Blank and Steve Weinstein, of Stanford University and the Lean Educators Summit, visited URI pre-covid, to engage with faculty and students around entrepreneurship. These visits, hosted by Deedee Chatham, director of the URI Launch Lab, inspired introduction of the new course into the URI curriculum. This course deepens URI’s relationship with the Common Mission Project and with the Lean Educators Global Summit.

Before the first student stepped into the classroom, URI’s H4O team–Paula Bontempi, dean of URI’s Graduate School of Oceanography; David Smith, associate dean of the GSO; Jaime Palter, associate professor of oceanography; Seray Ergene, assistant professor of business instruction; Rob Pockalny, associate marine research scientist; and Chatham–recruited industry sponsors. The companies suggested problem statements for the student teams. They provided access to stakeholders for the teams to interview and worked directly with the teams throughout the semester. 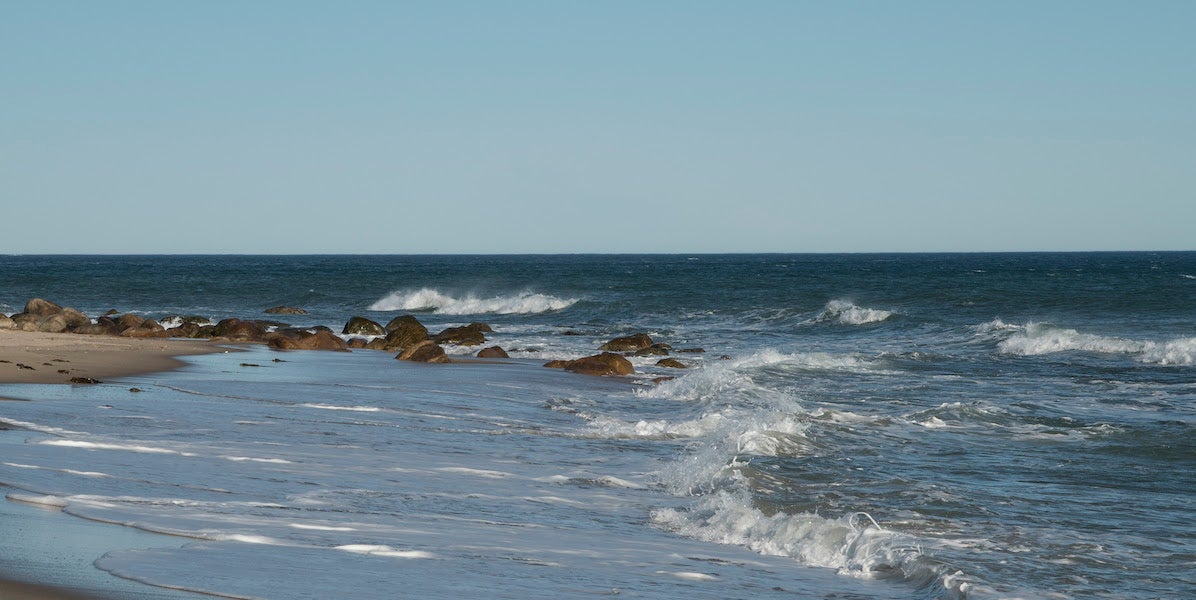 Hacking4Oceans teams students with academic and industry experts to tackle complex problems critical to our oceans while inventing and adopting new technologies.

“This kind of university/industry/stakeholder connection is a really unique element of the class,” Chatham said. “It connects student learning to the world around them, builds their network, and can be a stepping stone to their future careers.

“Students from any discipline could apply to take the course. They picked a problem statement of their own, or used one that we suggested,” Chatham said. Then, they took their best shot at showing how they would address the problem. This application process showed us how serious they were about diving deeply into a problem and their propensity to succeed in this experiential class format. During the first week of class, the industry sponsors came in and talked about the specific problems they were bringing to the class. The students formed teams around problems that they were most interested in working on.”

“I’m from India, and my teammates were from China, Indonesia, and America. We were the most diverse group, which helped a lot, because we were each looking at the problem from a different perspective. That helped how we chose our question and conducted interviews.”

Interviews were a key part of the course, and student teams were expected to conduct eight per week. It ended up being one of the major challenges of the course.

“In other classes, you have your homework, you sit down and do it, and you’re done,” Groetsch said. “In this case you had interviews every week, and you had to schedule them whenever you had time. It required a lot of organizational skills. It wasn’t just ‘OK, I had the interview, and I’m done.’ It was a matter of scheduling the next interview, and gathering the insights from your last meeting. It was a real challenge to manage it without being too stressed.”

Mentor companies were from the defense, wind energy, and ocean science and conservation industries. They suggested questions as a starting point, but students gradually developed a new direction based on interviews and their research. For Haas’ group, adjusting the problem statement was a major hurdle.

“There was a difference between the original question they (the company) gave us and shifting the topic to one which our team identified as the underlying issue,” Haas said. The intellectual diversity was beneficial to her group as well. “In my case, I’m a communicator, but then we had a student who was a chemist and would address the problem with their point of view; another was a business major, so their ideas were different. I enjoyed the process of our collective discovery.”

Haas’ group’s challenge was to come up with further development for offshore wind. “We wanted to know how excess energy from offshore wind could be stored or converted into another power source. Speaking to various experts, we concluded that energy storage and/or conversion is the biggest challenge. All renewable forms of energy need to integrate into the grid at the levels desired to remove dependence on fossil fuels. While the infrastructure and market may not be there to support that goal yet, our solution focused around forging a transition application – recycling electric vehicle batteries to provide backup power and ancillary services that would enhance coastal resilience in the event of a disaster. This would also provide a second use for EV batteries as demand increases and would incorporate storage abilities from all renewable energy sources, including solar, as well as off- and onshore wind.”

Rao had a similar experience with her company: “Our initial interviews were more like conversations. We needed to listen to our subjects to allow us to figure out what we wanted. We had to go in there and explain our focus, and then solicit any advice that we thought would be useful.”

“We ended up creating a company called I-Sea-U which would ‘Support Effective Enforcement in Marine Protected Areas (MPA’s) and Closed Fisheries Areas.’ I-Sea-U offers two services: the first one is an app that would digitize collecting illegal fishing data and make it more efficient for the enforcement agencies. The second service is a cloud platform, which would collect data from various sources (satellites, acoustic sensors, radars, non-governmental organizations) and synthesize it to create an output such as a dashboard for the client. Both the services would be completely customizable to fit the needs of the client.”

Groetsch’s team also made course adjustments. “Our initial problem statement was: Creating a pride-driven model for ocean conservation in Rhode Island. In the course of our class, we changed it to: Bridge the ocean education gap in schools, as well as the communication gap among organizations, teachers, guardians, students, and science communicators.

“Our solution was to create a network of ocean conservation stewards to encourage engagement and connection to the local ocean,” Groetsch said. “More specifically, creating a web-based platform that uses a dating app- type algorithm to connect: science communicators; education, advocacy, and conservation organizations; teachers, guardians, and students.”

Students developed new skills and made connections to potential employers. “We had many people tell us to please send your final product,” said Rao. “We’d really be interested in seeing it. The course engaged all the skills that I really like: writing, leadership, and communications.”

Groetsch had a similar experience. “It was very different from other courses we would take at the university. Because of that real-life experience, I was able to take away a lot. I was happy with the product we eventually created, and we could see that it had the potential to really be implemented.”

Haas too felt the work left her with potential connections. “I feel like I have the context now that if I had to go back to those people, I could. I have rapport with them. That was one of the driving forces for me, so that’s awesome.”

Any enrolled graduate student at URI from any department may apply to take the course. Advanced undergraduates who are in or entering their senior year may also ask for permission to enroll.