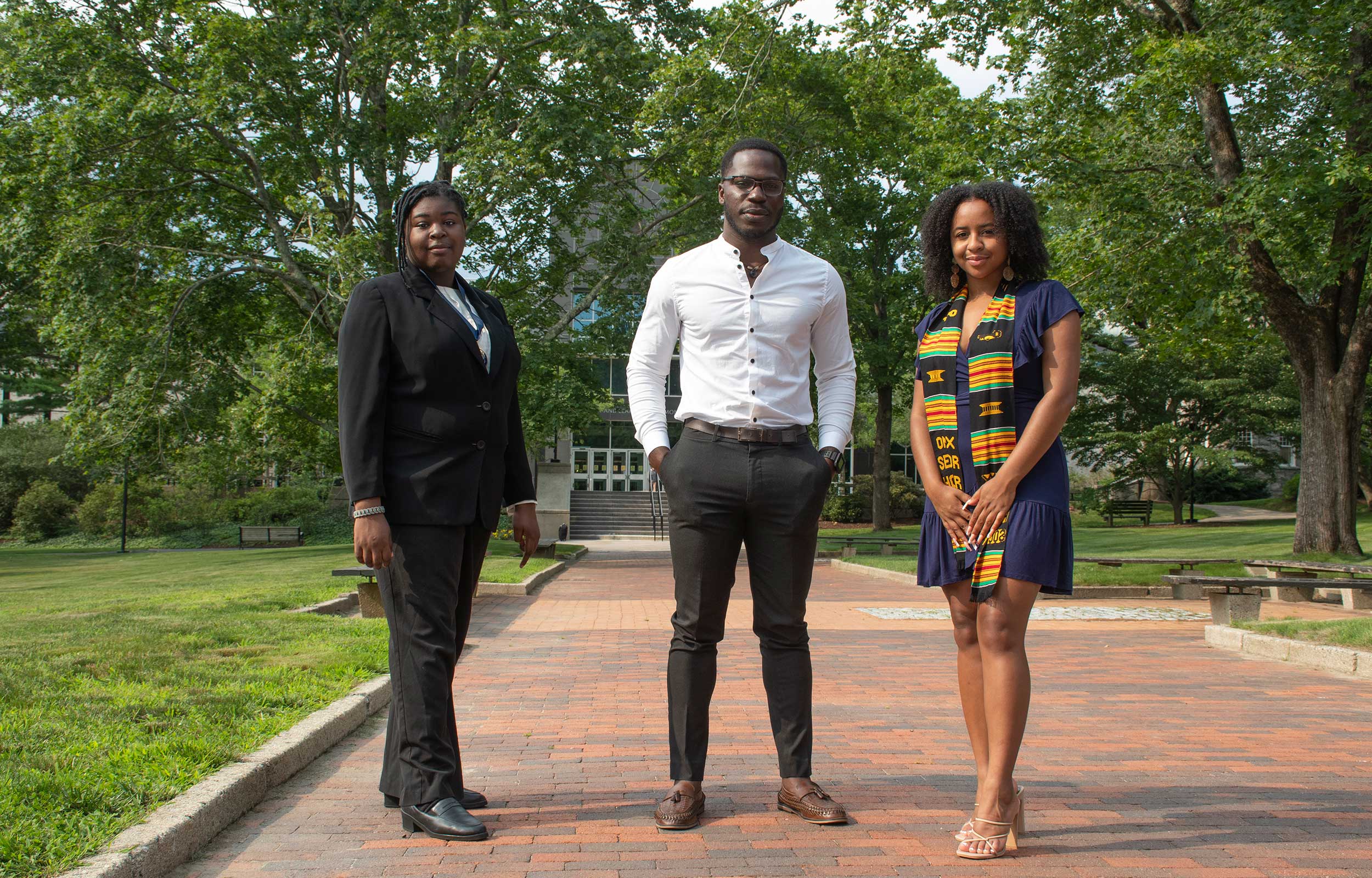 They will go on to careers in academia, communications, law and public policy, international business, medicine, engineering, research and more. However, this year’s recipients of the URI Black Scholar Awards have already established themselves as leaders.

Whether leaders in track and field, like Kelly MacDonnell and Maxwell Dickens; or, leaders in student government like Austyn Ramsay—each of this year’s 13 honorees have left their mark. In pursuit of excellence, they have served as scholars, as mentors, as members of student organizations, as community volunteers and as voices for social justice.

As this year’s recipient of the Estes Benson Award for Academic Achievement, Oluwatoyin “Toyin” Okele graduated in only three years as an English major with a double-minor in fine arts and classics and a 4.0 grade point average. In addition to receiving the Estes Benson Award, which is awarded to the male and female students among graduating Black seniors with the highest overall academic grade point average, Okele won first place in the 2020 Undergraduate Critical Essay Contest and was a recipient of the 2021 University Academic Excellence Award for English. In the fall, she will pursue a Master of Fine Arts degree in creative writing at the University of Massachusetts Amherst on a teaching assistantship.

Simon Olaoye, who received the Martin Luther King Jr. Award for Outstanding Leadership and Contribution to the University Community, took a different path to the University. Born in Ibadan, Nigeria, Olaoye immigrated to the United States with his family in 2004. He transferred to URI as a Talent Development Scholar majoring in kinesiology and biology with the goal of pursuing a career in physical therapy. As a senior resident assistant, Olayoe developed programs that fostered a dialogue and educated his residents on issues that disproportionately impact marginalized populations of people. As a member of Brothers on a New Direction and a student leader, he served as a role model and a mentor, becoming instrumental in the success of his peers and recognizing the need to give back to his community and empower others.

As a homeschooled student with minimal experience in a typical school setting, Samarah Jonfelix’s first experiences as a college student were challenging. According to her nominator, and using Jonfelix’s own words, “college life felt like a roller coaster ride. The climb, the twists, the turns—(she) had to learn to hold on tight and not let go.” The double major in public relations and communications studies persevered, bringing honor to the URI Talent Development program and striving for academic excellence every semester—ultimately earning her the Sojourner Truth Award for Scholarly Persistence and Dedication.

The Black Scholar Awards were established in 1998 by Donald Cunningen, professor of sociology and anthropology, to recognize African American students for their outstanding leadership, community involvement, academic and athletic achievements. Since its founding, the program has recognized hundreds of students who have made outstanding contributions to the University, state, and nation.

Congratulations to the 11 graduating seniors and 2 graduate students who received URI’s Black Scholar Awards this year. They are:

Learn more about each of these talented student leaders.