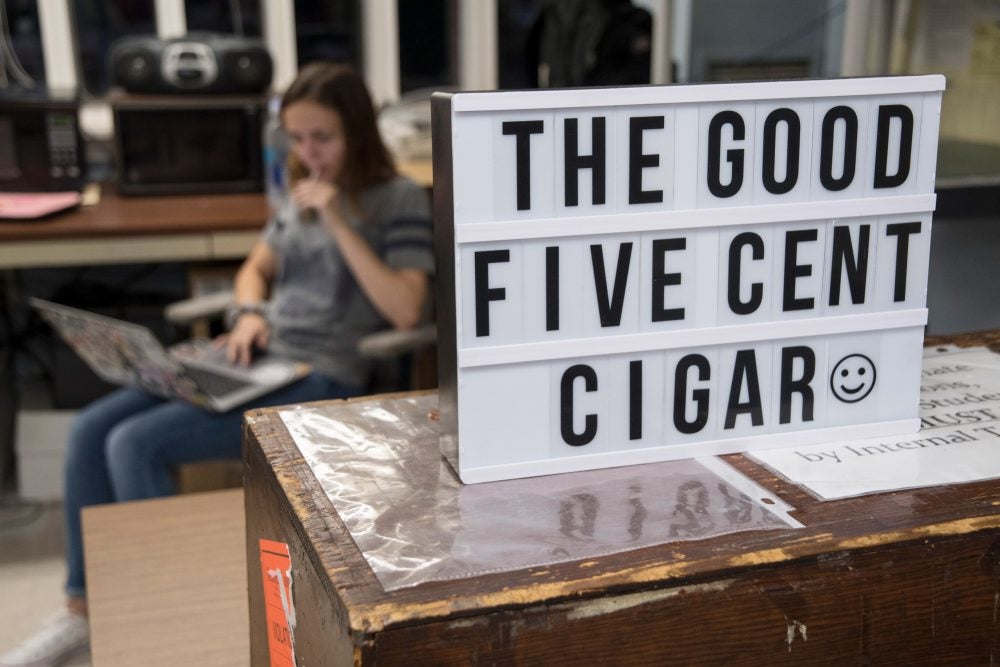 In an era when trust in the media is at a low point, the student journalists at The Good Five Cent Cigar have responded by adding an investigative unit, Cigarlight.

Eight of 25 staff reporters compose the Cigarlight team. Including contributing writers, the Cigar staff is 50 members strong, with most students devoting between 20 and 30 hours weekly to the newspaper.

“Student journalism has a role to play beyond that of a college newspaper,” Bush said. “And we have some great, inquisitive reporters. We wanted to give them the opportunity to collaborate. Cigarlight stories tend to involve a lot of information and time.

“Basically they’re important stories that deserve to be written,” Bush said. “They’re not necessarily controversial. To do them right is a huge time commitment.”

Thus far, Cigarlight has written about Student Senate spending and produced a piece on the Fine Arts Center renovation.

Cigar Editor-in-Chief Lianna Blakeman ’19, a double major in writing and rhetoric and English, dreams of working in publishing and living in New York City. She’s been on the staff of the Cigar for three and half years, starting as a reporter. She said she is pleased by the URI community’s response to the Cigarlight team.

Analytics indicated the newspaper wasn’t being read. Readership has been on the rise as of late, Blakeman said. “We’ve built a lot of trust. We’re serious journalists. People now not only read The Cigar but also trust it.”

The two hope Cigarlight will also attract new student journalists to the newspaper. They expect that interest in the paper will continue to grow as they continue to build a reputation for honesty, fairness, and dedication to the URI community.

“We’re committed to being grounded in the idea that they can pick up a newspaper and get valuable information,” Blakeman said.

“We know we’ve made change happen.”