Looking at the Pine Island Glacier from the icebreaker RSS James Clark Ross.

A URI professor is one of a half-dozen researchers credited with the discovery of an active volcano heat source under Antarctica’s fastest-moving—and melting—glacier. 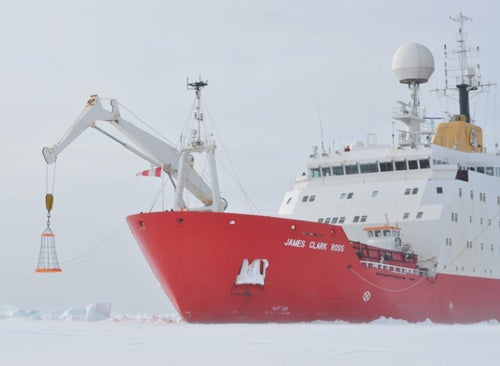 URI chemical oceanographer Brice Loose, a faculty member in the Graduate School of Oceanography, is one of a team of researchers credited with the discovery of the heat source beneath the Pine Island Glacier in Antarctica. Loose was part of a 2014 expedition on the icebreaker RSS James Clark Ross from January to March of 2014, Antarctic’s summer. The surprising find offers insight into the movement and melting of the Pine Island Glacier. Scientists study glaciers’ destabilization to predict sea levels rising.

Read more about the expedition.