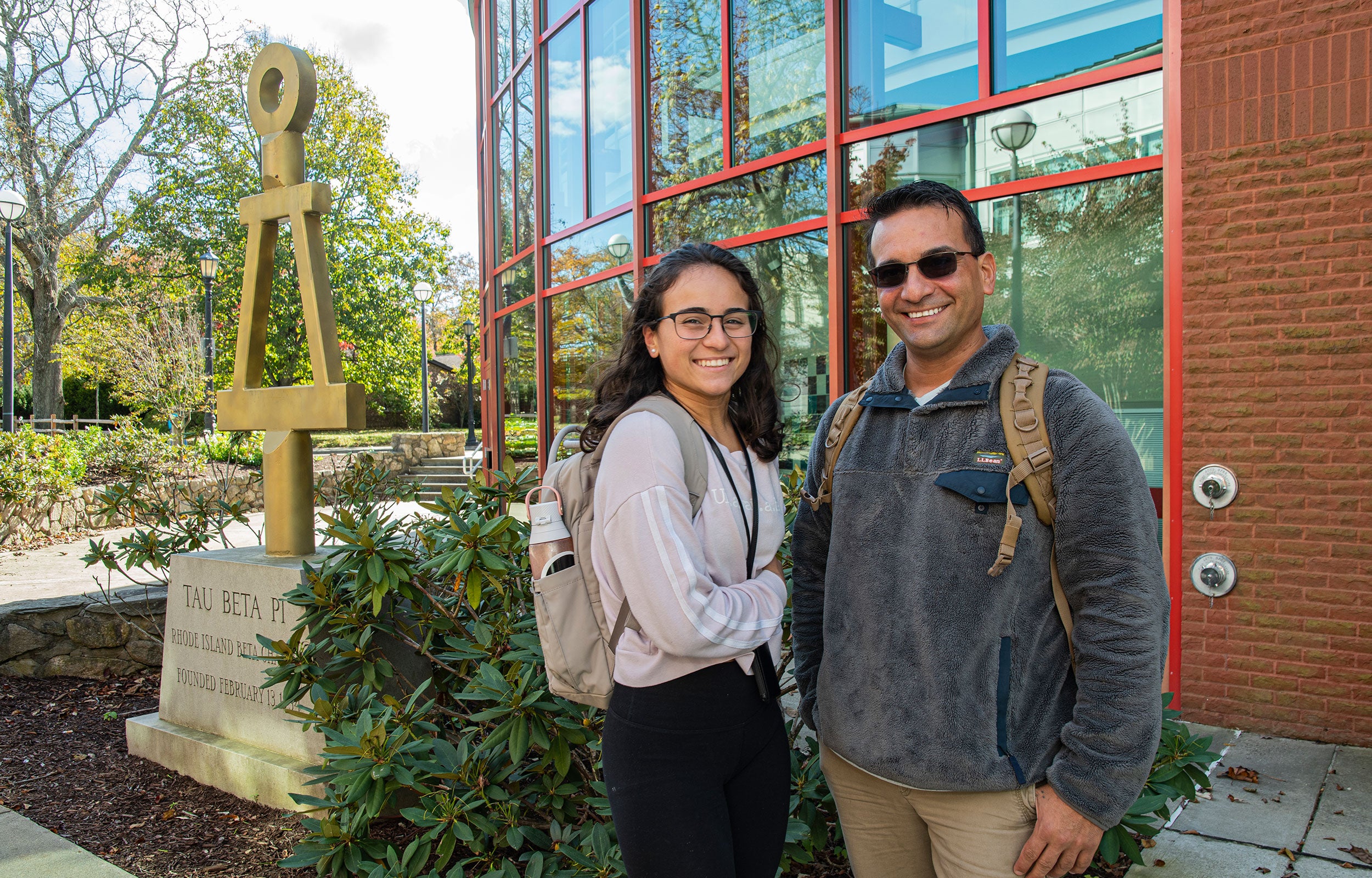 When Victor Salinas retired from the Navy, he knew he wanted to be an engineer. After spending more than 13 years of his Navy career as an aircraft launch and recovery specialist, shooting planes off an aircraft carrier (and catching them on their return), he knew his unique experience could help him bridge the gap between operators and engineers.

URI’s Office of Veterans Affairs and Military Programs offers a full range of resources to support, assist, and empower Veterans and military-connected students to pursue their educational goals.

A visit to the University of Rhode Island Office of Admission in 2019 led him to Jeff Johnson, an advisor and instructor in the Alan Shawn Feinstein College of Education and Professional Studies, who frequently works with student veterans reacclimating to an academic environment. On Johnson’s advice, Victor enrolled at the Community College of Rhode Island to brush up on his math skills and take some introductory engineering courses.

“I took a big, huge humble pill and went through the whole math curriculum in two years. I literally lived in my math books for my entire tenure at CCRI.”

In the spring, he finished his last class in advanced engineering mathematics. While he intended all along to transfer, it wasn’t until he spoke with URI’s assistant dean of engineering about his transfer plans that he decided to make the jump, starting his first semester at URI this fall as a junior industrial and systems engineering major.

At the same time, his daughter Kaitlyn was looking for a new challenge. After attending CCRI remotely for a year due to COVID-19, she wanted the opportunity to attend a larger school, strike out on her own, and make school a bigger priority with the hopes of pursuing a pre-med track.

They didn’t plan it, but their transfers put them at URI at the same time. Literally.

At home at URI

When Kaitlyn Salinas leaves her biology class in Kirk Hall’s Cherry Auditorium on Monday mornings, her dad is arriving for his class on manufacturing processes and systems.

The two meet up periodically for lunch at Hope Commons. Kaitlyn will also stop by the Office of Veterans Affairs and Military Programs as well as the office of the Student Veterans Organization on the third floor of the Memorial Union to visit. Through both offices Victor and Kaitlyn have met other student veterans and military dependents, made friends, and received academic assistance and support navigating programs and benefits.

“I’ve never seen a network like that. I keep running into the best of the best at URI,” said Victor of the friendship and support offered through the two offices. URI currently enrolls close to 300 military veterans or active military, with approximately 140 military dependents. Those numbers have seen steady growth in recent years.

“I’ll pop in maybe once a week between classes to say hi,” said Kaitlyn. “Everyone has a different story and a different perspective. I really enjoy going in and hanging out. Everyone is really cool.”

Of course, a dad and daughter on campus at the same time could be fraught with challenges—but the two have found a balance.

“I enjoy seeing him on campus,” said Kaitlyn. “It’s definitely a different experience than everybody else—but I like my dad. We have a good bond—and he still gives me the space to be a college student. We feel very fortunate to have this experience together.”