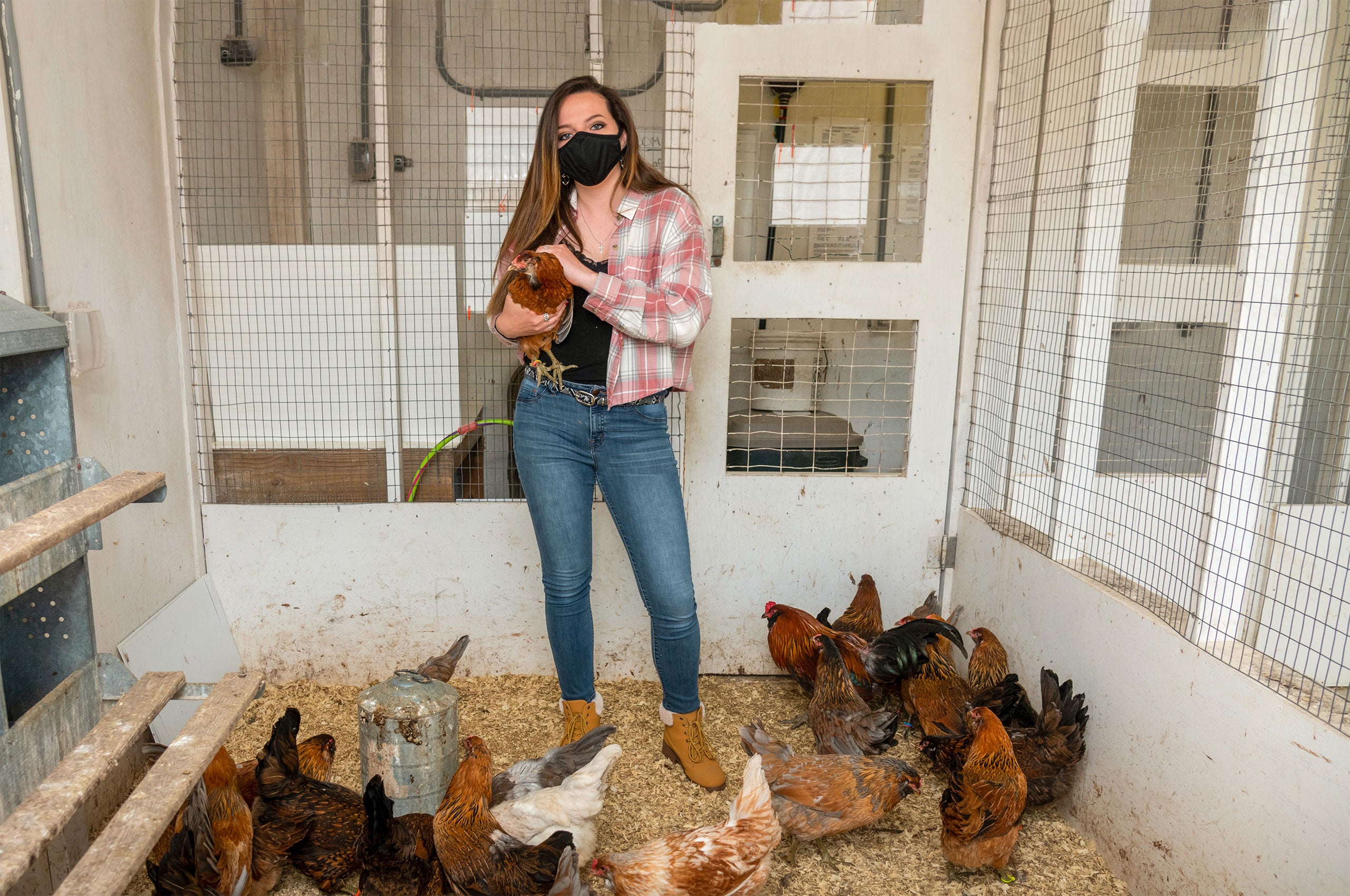 Jessica Weidemann ’22 hopes to work at a zoo or aquarium when she graduates. Knowing she’ll need skills in animal training, Weidemann enrolled in an advanced animal behavior class that had her training animals at URI’s Peckham Farm.

The most challenging exercise so far: training a chicken.

“I didn’t think of chickens as being very smart going into it, but my chicken has been very easy going and has caught on to everything pretty quickly,” said Weidemann, an animal science major. “It depends on the chicken and how you approach training. Mine is easily motivated by rewards.”

Each of the 13 students in assistant professor Justin Richard’s class is assigned a chicken and instructed to train it to do several required behaviors, as well as other behaviors the students choose themselves. All train the birds to understand that when they hear a clicker, a food reward will be delivered. They also train the birds to peck at a target.

Some students are also training their chickens to get on a scale to be weighed, identify a particular color, or jump through a hoop. Weidemann’s chicken is able to select a green card among cards of several colors. Then the bird pecks at a target.

‘The hen could pick herself out of a lineup’

According to Richard, the students are training the chickens using the same psychological principles employed in professional animal training contexts, from dogs to zoo animals.

“Last year, one student trained a chicken to recognize a picture of herself among pictures of her flock mates,” he said. “The hen could pick herself out of a lineup.”

It’s a challenging assignment because chickens are notoriously difficult to train.

“You can train a dog without knowing what you’re doing because they’re eager to please humans,” he said. “Chickens don’t care about you, and they’re naturally fearful of you. To train a chicken, you have to understand the science of animal behavior. It takes patience and attention to detail to train the birds to do something.”

Diandra Moore ’22 has already taught her chicken to peck at the color purple and ignore other colors. She is working to get the bird to perch on her arm.

“You have to try all different tactics because it doesn’t always go smoothly the first time,” said Moore, who trains her chicken about three times each week. “Sometimes you have to change your approach; you might have to try different ways than you originally thought. You also have to be patient. It takes time.

“I like to see the progress I’ve made over time,” she added. “You work hard to teach it to do things, and once you see their progress, you feel pretty good.”

Moore plans to go to graduate school to continue her studies of animal behavior, probably with wild animals like wolves, and she is confident that the skills she is learning in Richard’s class will be useful. 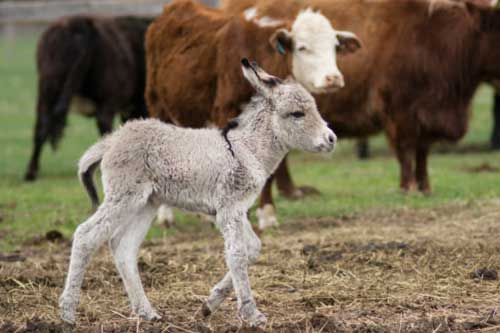 Want to work with animals?

Within URI”s B.S degree program in Animal Science and Technology, students may choose one of three tracks: Animal Management, Animal Science, and Pre-Veterinary.

Many of Richard’s previous students have reported to him that when they talk about the class and the chicken training exercise in job interviews, potential employers react positively.

“The class helped me succeed in the application and interview processes for several jobs because of the skills that I mastered through the course,” said Mia Luzietti ’21, now an animal care specialist at Racine Zoo in Wisconsin. “I was able to discuss positive reinforcement, not only from a place of understanding the topic, but from real training experience, which many facilities were impressed by.”

Other former students are working or interning this year at the U.S. Navy Marine Mammal Program in San Diego, Sea World in San Antonio, Coral World in the U.S. Virgin Islands, the Buttonwood Park Zoo in New Bedford, Massachusetts, and elsewhere.

“If I’m going to work in a zoo or aquarium, I’ll have to have knowledge about training and shaping animal behaviors to help with husbandry and care,” said Weidemann. “I’ll need to know how to approach training of different animals and how to reinforce certain behaviors. That’s what I’m learning from this class.”