Rhode to a Degree 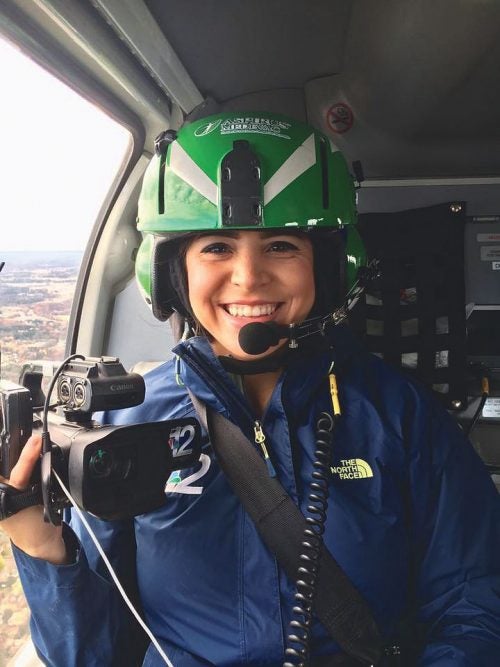 Multimedia journalist, because “democracy cannot function without people being informed.”

Journalism professor John Pantalone seats 317 students in alphabetical order so he knows who shows and who skips.

Kendall Moore’s multimedia journalism class “was the reason I became a TV journalist.”

Journalism professors John Pantalone and Kendall Moore. Pantalone “never shut the door on me, even though I had constant questions.” Moore was “a mentor, friend, colleague; you name it.”

WTNH-ABC 8 (Conn.), WJAR-NBC 10 (R.I.), Rhode Island Monthly, and more. “URI and the Harrington School have good reputations, which helped me land those internships.”

Meeting Josh Aromin ’12 from Rhode Island Monthly at URI Journalism Day and following up via Twitter.

Leadership Outside the Classroom

Standards chair for Sigma Delta Tau sorority, in charge of ensuring ethical conduct of the sisters.

When an estranged husband went on a shooting spree and barricaded himself in an apartment, Allie Herrera ’16 raced to the scene as the local CBS reporter. Less than a year after finishing her journalism degree, Herrera earned her stripes that day—interviewing, writing, and delivering the story live.

In an era of digital media, instant gratification, and shrinking newsroom budgets, journalism has been transformed. “You’re a jack-of-all-trades. You’re a Swiss Army knife,” says Herrera, now at the NBC affiliate in Memphis, Tennessee. “I can’t explain how exciting it is to get the story—to get the A slot for the broadcast and have a live shot. It’s an adrenaline rush unlike anything.”

Herrera embodies the 21st century reporter: undertaking—solo—a job that, just a decade ago, fell to a team that included a writer, photographer, webmaster, and producer. It’s the primary reason the University of Rhode Island formed the Harrington School of Communication and Media in 2008 with a $5 million gift from Richard J. Harrington ’73 and his wife, Jean. The school combines communication studies, film/media, journalism, public relations, writing and rhetoric, library and information studies, digital media, and sports media, exposing 1,350 students to a world that no longer operates in silos.

It was in the school’s lab that Herrera learned to edit footage she shot with the school’s cameras. She teamed up with journalism student Marissa Tansino ’17 to turn the mock TV studio into a broadcasting center streaming campus news via the internet. She mingled with the school’s advisory board of industry leaders who served as mentors, friends, and inspiration. Scholarships from the Harrington School and elsewhere helped her balance internships, a teaching assistantship, a job at the Anna Fascitelli Fitness & Wellness Center, and schoolwork.

“If the Harrington School had not made that equipment available, those resources available, I would not have been as prepared to enter my career,” she says. “It prepared students for what we would see in the outside world.”

Those resources will grow with an additional $3 million commitment in June 2018 from the Harringtons. The gift will fund further renovations of Ranger Hall, which already houses the $6.8 million Harrington Hub for Global Leadership in Communication and Media, including a video-editing lab, and active learning classrooms.

It’s also where faculty converge to teach, mentor, and conduct research. Herrera credits two in particular—journalism professors Kendall Moore and John Pantalone—with helping her transition from being an aspiring kinesiology major to graduating as a journalism major. “They taught me to be curious,” she says.

And when she graduated, she became just the second person in her family to do so, behind her sister. Born in Peru, Herrera’s parents moved the family to the United States when she was 5 in search of a better life. “My parents still wake up thinking they are in a dream because their daughter is
a journalist on TV,” she says. •