Masked and wearing a baseball cap, 2020 Tony Award-nominee for Best Actor Andrew Burnap ’13 easily passes for the students he teaches.

And what chasms may exist between his experience and theirs, Burnap bridges with a rallying cry: Fail often and well.

“This class is meant for us to get frustrated and messy in order to—when we get to have that relationship with an audience—all becomes organic and free-flowing,” he said. “Strong and wrong is a great place to start.” 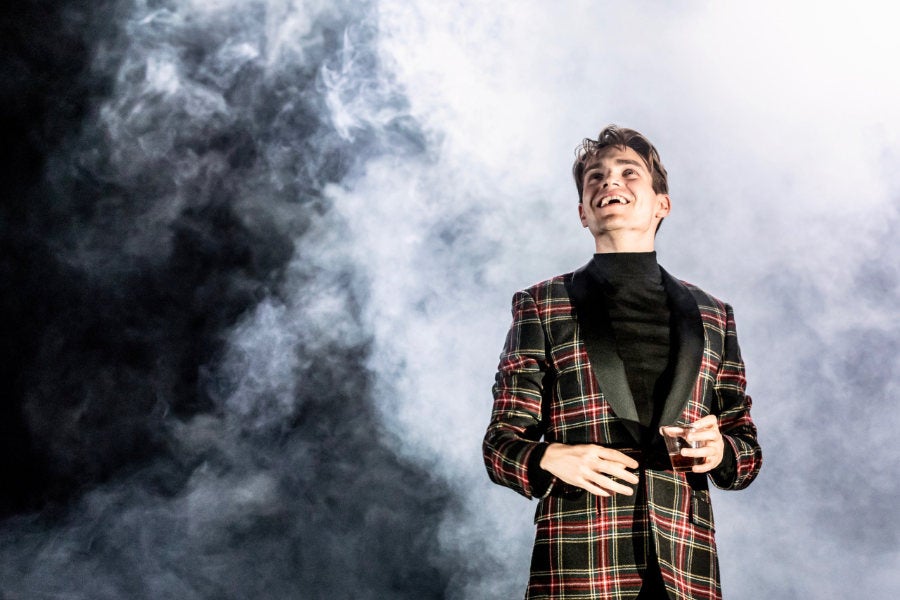 Portrait of the artist

He was the surprise winner of the Best Performance by a Leading Actor in a Play at the 74th Annual Tony Awards; for Andrew Burnap, though, real success is seeing an audience moved by a story well told.

After URI, Burnap headed to Yale School of Drama, the alma mater of Meryl Streep, Lupita Nyong’o, Paul Newman, and Courtney B. Vance. He graduated first in his class and then landed the male lead in Shakespeare in the Park’s production of Troilus and Cressida. A starring role in playwright Matthew Lopez’s 2017 sensation The Legend of Georgia McBride followed. And last October, Burnap learned he’d received a Tony Best Actor nomination for his role of Toby Darling in Lopez’s The Inheritance, a contemporary play spanning three years—2015 to the present—with flashbacks to the Reagan era, a turbulent time for gay men in America. The play’s Broadway run ended prematurely last March when New York City closed its theatres due to the pandemic. Burnap, who had always planned to teach one day, returned to his childhood home and URI.

He approached David Howard, the theatre department chair, about teaching a one-off workshop about the practicalities of being an actor. Howard, though, had a different vision.

“I was incredibly humbled that Andrew would want to return to his alma mater and teach,” Howard said. “When he contacted me about teaching a one-off seminar, I thought, ‘Why not see if he is interested in a class for the fall?’ He was immediately interested and I couldn’t have been happier.

“This isn’t just a star-turn, you know? He has the chops—an impressive resume and an MFA from Yale. The fact that he was able to create a role on Broadway in one of the most influential pieces of the new century, well, that is just icing. Andrew brings experiences that many of our students are interested in. It was really incredible for our first-year students to have the opportunity to work with him in the fall.”

‘The least I could do is give back’

Burnap was initially taken aback by Howard’s plan. “There’s a whole lot of pedagogy that points towards the craft of being an actor—how do you get into the world of a character, the world of a play, et cetera, but there’s not a whole lot, at least in my experience, about the practicalities of being a working actor in a major city.”

What practicalities? What life will look like the day after graduation, what an actor’s resume should contain and how an actor gets an agent or auditions, Burnap said.&nbsp;

When he heard Howard’s plan, he hesitated. Momentarily. “At first, I felt myself go, ‘Oh, I don’t know if I can do that.’ But then I thought, that sounds exactly what I would want to do. I think handing down the lessons of actor training is sacred. It’s gone on for generations, for thousands of years, and I take it very seriously.”

And theatre students, first-years last fall, upper-level students this spring, benefit from receiving both craft lessons and unvarnished advice from Burnap.&nbsp;”The people who taught me mean everything to me,” Burnap said. “I figured the least I could do is give back to a group of people that wanted it.”

And what one lesson would he most want his students to remember?

“Really the only thing that I think it is my duty to protect them from is self-doubt,” Burnap says. “I think that—especially in this time—can be one of the most destructive forces for a young actor.”

The only thing that is certain is that they will fail, Burnaps says. But it is through failure that strength and resilience are made possible.

“Getting them to accept failure, to almost seek failure, is something I’m deeply committed to instilling in them—and to keep their own self-critics as far away as possible.”