A bird’s-eye view of the Port of Davisville at Quonset Point. The port is one of the top 10 auto import locations in North America. As the state’s only public port, the Port of Davisville supports 1,700 jobs. The port is also a growing site supporting offshore wind construction staging and maintenance operations. URI alumnus Steven J. King ’88 is the managing director of the Quonset Development Corporation, where he handles port operations and real estate transactions, as well as planning, engineering, design, and construction of infrastructure improvements.

The ocean has always been important to Rhode Islanders. With a new focus on the blue economy, URI is working to help the Ocean State take even better advantage of its opportunities.

Definition of blue economy
: local and global businesses and economic sectors that rely on use of or proximity to oceans and coastal areas—especially those concerned with employing sustainable use of ocean resources and minimizing impact on ocean environments and habitats.

The ocean has always served as a pleasant backdrop to images of Rhode Island, appearing in postcards and tourist brochures as an omnipresent blue entity. Beyond its merely aesthetic role, however, the ocean plays a crucial role as the lifeblood of the state’s economy. Rhode Island has more than 400 miles of coastline, curling around bays, inlets, and estuaries that reach deep into the Ocean State’s interior and lend themselves to a wide range of industries. Between 6 and 9 percent of Rhode Islanders work directly within the so-called blue economy—dwarfing the 3 percent who make their living by the sea in Massachusetts, Texas, and California—and bringing some $5 billion into the state’s economy.

But even that number belies just how connected state residents are to the ocean. “It’s an economic number, but it’s so much bigger than that,” says Jennifer McCann, director of U.S. Coastal Programs at URI’s Coastal Resources Center (CRC). “It’s who we are—it’s what makes Rhode Island, and it’s what makes Rhode Islanders.” In March 2020, she coauthored a report on The Value of Rhode Island’s Blue Economy. “Our history is rooted in the blue economy, from the Narragansett people who have long lived on our coastlines, to the water that powered the Industrial Revolution, to the geological features of our bay that have made it an ideal location for the defense industry,” McCann says. The dominance of the ocean has only gotten stronger over the years, as the state has prospered by commercial fishing, shipping, and ocean-focused tourism, as well as burgeoning industries such as aquaculture and offshore wind.

At the landing in Ninigret Pond, Charlestown, R.I., Rob Krause of Ninigret Oysters puts ice over his harvest in preparation for pickup and distribution. Aquaculture is one of Rhode Island’s fastest growing sectors, with 76 farms and 319 acres, as of 2018. This low-impact green industry farms oysters, mussels, and seaweed that clean the water column (one oyster filters 50 gallons of water per day). 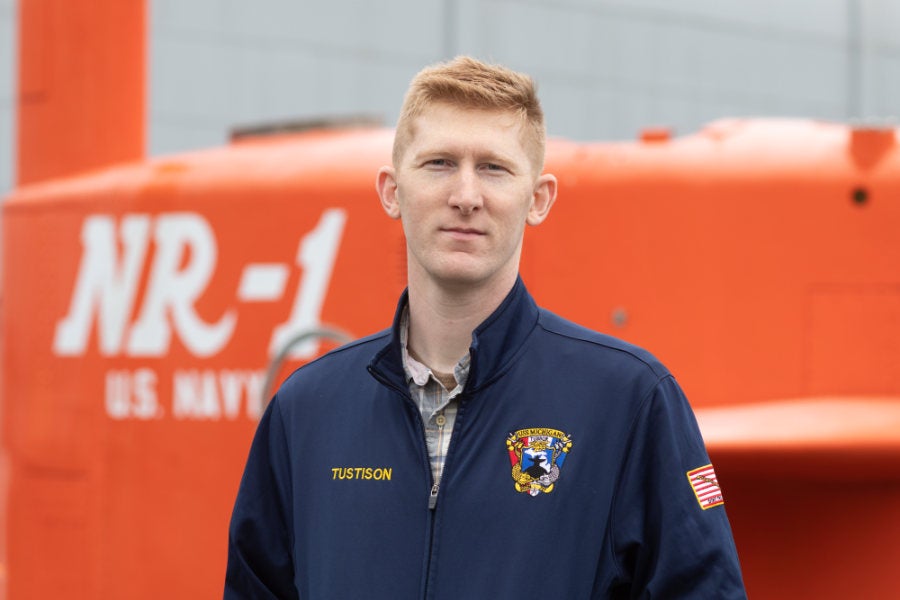 Wave of the Future

URI faculty and students are working directly with federal defense and private industries to advance naval technology and keep the U.S. submarine fleet ahead of the pack.

The University of Rhode Island has played a key role in developing the blue economy, with the location of the University’s main campus in Kingston—just 5 miles from the shore—both an advantage for research endeavors and a selling point for students. “The number one reason many students come to URI is the attraction of the ocean and the many aspects of marine sciences and policy they can study here,” says URI President Marc Parlange, who cites his interest in climate, hurricanes, and wind engineering as part of what drew him here. “The ocean infuses every aspect of the University.” For example, he points to the fact that URI was the first university in the U.S. to establish graduate programs in ocean engineering and adds, “We offer a unique range of ocean-focused courses and programs—from Literature of the Sea to underwater archaeology; from marine affairs to environmental and resource economics, and more.”

Primary Sectors of the Blue Economy

Secondary Sectors of the Blue Economy

Even closer to the sea than the Kingston Campus, the Bay Campus in Narragansett is home to URI’s acclaimed Graduate School of Oceanography and the University’s Department of Ocean Engineering, as well as the CRC, established more than 50 years ago at the request of the state to assist in planning and developing Rhode Island’s many overlapping coastal industries. More recently, URI has partnered with the University of Connecticut to form the National Institute for Undersea Vehicle Technology, consolidating the University’s many defense-related research projects, and partnering with the U.S. Navy and local defense contractors to help design next-generation submarine and robotic technology.

Parlange hopes to lead the University into a new era, one focused on further developing the blue economy. He aims for the Bay Campus to become a hub of innovation, where students will work closely with startup companies to create new technologies for ocean-related industries. He wants to grow URI’s graduate programs, making URI the destination for international and for both in- and out-of-state students to study ocean-related subjects. As a first step to that, URI budgeted an extra $1.5 million last year for its Ph.D. programs, with the intention of attracting new students in many areas, including environmental economics, coastal ecology, oceanography, engineering, humanities, and business. “These are students who could have gone anywhere and chose to come here because of the outstanding interdisciplinary cohort of faculty, staff, and students we are building,” he says.

Parlange notes that only 1,000 of URI’s 18,000 students regularly get out onto the water as a formal part of their studies. “I’d like to see all of our students and faculty get out onto the water, not just recreationally—sailing, swimming, kayaking, surfing—but also academically—doing hands-on ocean research, writing about the ocean, etc., on a regular basis,” he says.

“Our history is rooted in the blue economy, from the Narragansett people who have long lived on our coastlines, to the water that powered the Industrial Revolution, to the geological features of our bay that have made it an ideal location for the defense industry.”
—Jen McCann, director, U.S. Coastal Programs, URI Coastal Resources Center

While URI is not the only university focused on ocean-based research—other prominent institutions include the University of Washington, the University of California–San Diego, the University of Miami, and Oregon State—Parlange aims to strengthen URI’s position as the premier center for blue economy research in the Northeast. Recently, URI received a $500,000 Build Back Better phase one planning grant from the federal government to plan and develop eight separate projects with nearly 125 partners to help grow the state’s blue economy. The projects include expanding an advanced array of sensors in Narragansett Bay, which are linked to computational models providing up-to-the-minute data on ocean conditions for a wide range of industries.

The CRC, with sister program Rhode Island Sea Grant, works closely with partners, such as the Coastal Resources Management Council, to plan and enhance the ocean-based economy; a chief goal is fostering sustainable development while preserving natural resources and traditional coastal and ocean uses. The CRC has consulted on coastal resilience issues such as responding to the threat of sea-level rise and stronger hurricanes due to climate change.

It has also been instrumental in training students for the state’s resurgent aquaculture industry in oyster, scallop, and even kelp farming. And it provided crucial science to help site turbines for the country’s first commercial wind farm off the coast of Block Island—a vital test case for the estimated 2,000 wind turbines that will appear along the Atlantic coast in the coming decade. “All of these industries are gobbling up our graduates because they recognize that URI is creating a workforce that is effective,” McCann says.

In all these endeavors, McCann says, URI can serve as an “honest broker” to help balance competing uses of the coast—and mediate the sometimes-contentious turf wars that break out between the fishing industry, pleasure boaters, oyster farmers, conservationists, and marine shipping and coastal energy companies. “The University of Rhode Island is a trusted entity. We can listen to all sides and bring the best science and management practices to the discussion,” she says. “We can make sure that the science being done is understood by decision-makers and hopefully integrated into decisions that are made.”

“URI can be the economic driver for the blue economy in the state and the region.”
—Marc Parlange, president, University of Rhode Island

Through the CRC and other university initiatives, URI also plays an important role in advancing the blue economy beyond the Rhode Island coastline. The CRC is widely recognized for its international work in helping the governments of developing nations build and manage sustainable fisheries. The center’s work has included projects in Ghana and the Philippines, and most recently a group of Pacific Island nations. The University’s global blue economy work is important, and, through it, URI is expanding its global impact.

But when it comes to the blue economy, Parlange sees URI’s work right here in Rhode Island as critical. “URI can be the economic driver for the blue economy in the state and the region; an entrepreneurial hub that will attract industry, government, and nonprofits to Rhode Island to work with our students and faculty.”

In the coming years, the ocean is bound to become even more important as a source of both food and energy for Rhode Island and the world—and as a threat to be managed as climate change continues unabated. With a focus on the blue economy, URI will continue to provide guidance for ocean-related opportunities and challenges in the future. “As we plan and develop this huge coastal and ocean infrastructure, we need to do it in a way that ensures all Rhode Islanders have access,” says McCann, “so we’re building strong passionate stewards for our coasts and oceans.” •