KINGSTON, R.I. – Jan. 9, 2023 – The first day Tracy Santos stepped onto the University of Rhode Island’s campus was the first day of classes, September 2021. Originally from the Bronx, New York, she joined the Marine Corps in 2013 at age 17, where she served as a member of a light-attack helicopter squadron, eventually achieving the rank of sergeant. Now, close to 10 years later, Santos ‘24 is president of URI’s Student Veterans Organization and has been named one of 10 student veteran of the year finalists by Student Veterans of America.

Lauding the selection, Bob Flynn, director of URI’s Center for Military and Veteran Education, and a retired Navy commander, stated, “Tracy brings so much talent and energy to the URI community. Her leadership at the Student Veterans Organization has been inspirational. Her family, the University of Rhode Island and the Marine Corps should all be proud of her nomination as Student Veteran of the Year!” 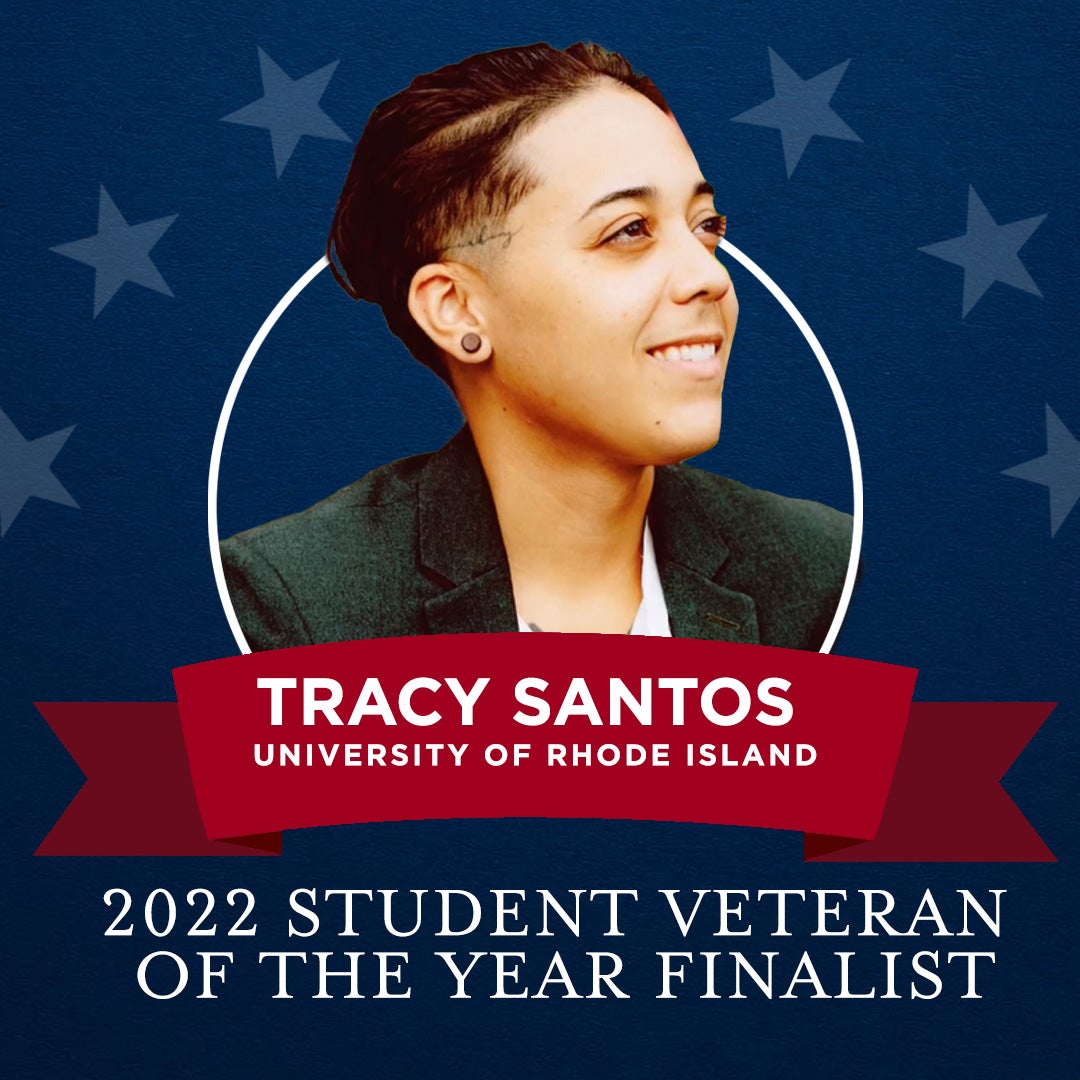 ‘I’m doing this for my Marines’

The Student Veterans of America Honors Awards celebrate the significant contribution and impact that student veterans, advisors, chapters, and partners make in empowering student veterans to lead and live their best lives. Honorees represent the very best of the student veteran extended community, as well as the epitome of service, scholarship, and accomplishment.

“I was extremely surprised to get the call that I was nominated and now a finalist. It is humbling to be on the same platform with such amazing student veterans who are doing so much on their very own campuses and beyond,” said Santos, who is majoring in clinical neuroscience. “I am proud to be able to represent the University of Rhode Island, and most of all its student veterans. Whether I am named Student Veteran of the Year or not, being a part of URI and the SVO in my heart I’ve already won.”

For many student veterans, the transition from life in the military to life on campus can be complicated—and sometimes isolating. Gone are the days of structure and the camaraderie of working and living with the same group of people. Facing new challenges of balancing classes, coursework, and exams with a home life that may include a spouse and children, a job, and other priorities can be stressful and leave little time for anything else.

First established in 2018, the URI Student Veterans Organization connects student veterans, current military and military-connected students. As president, Santos’ goal has been to create a supportive community, bring people together and help to build up URI’s student veterans – so that they understand they are an asset in the classroom and their life experiences are important and bring value.

“The SVO has become a home for me, and I hope it can become a home for others as well – to build new relationships and to make a healthy adjustment to college life – and to begin bridging the divide between students and student veterans so we can all feel a part of the same community,” said Santos.

“I’m proud to be part of a university community like URI that works so hard to make sure its veteran-scholars feel valued and connected,” said Sean Edmund Rogers, vice president of Community, Equity and Diversity, and an Army and Air Force veteran. “URI’s world-class academic programs attract the best and brightest service members to our campus, and Tracy is a shining example of the caliber of veteran-scholar at URI.”

Student Veterans of America is the premier organization leading service, research, programs, and advocacy for veterans in higher education since 2008.  Through a dedicated network of more than 1,500 on-campus chapters representing more than 750,000 student veterans, the organization works to provide the necessary resources, network support, and advocacy to ensure student veterans can connect, expand their skills, and achieve their potential, providing an educational experience that goes beyond the classroom.

Honors Award winners were announced at the Student Veterans of America Honors Luncheon during its national convention in Orlando, Jan. 6.