Wow! There are a lot of Rams out there catching waves — and catching some great shots of waves, too! 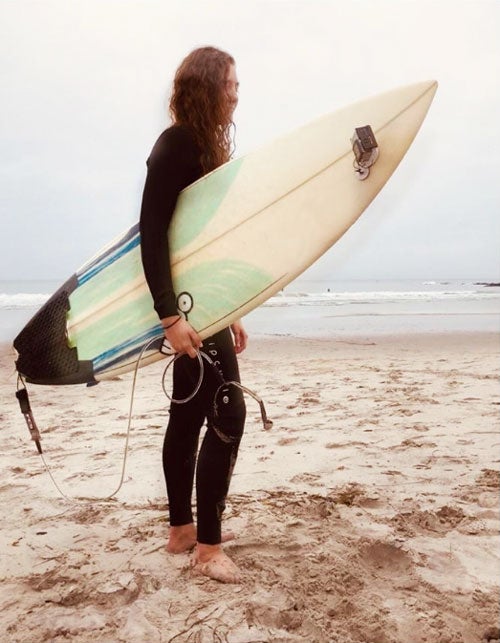 Christina Young ’20 shared some surfing photos with us, and agreed to talk with us via email about her connection to the ocean, and to surfing.

Surfing is a Way of Life

Where did you learn to surf?
I’m from Connecticut, but I learned to surf in Rhode Island. I have a deep connection to surfing here.

What’s the best thing about surfing?
The best thing is sitting on the water waiting, feeling the energy in the ocean moving around you. The other wonderful part is that to me, surfing isn’t so much a sport as it is a way of life. It completes me.

Does surfing enrich other parts of your life?
Surfing is my escape from the stressful parts of life. It keeps me grounded.

Is surfing an equal opportunity sport?
It’s true that surfing is a predominantly male sport. I don’t really know any other female surfers. But males always respect females in the water—at least with every encounter I’ve had. We all have respect for each other, even if we’re complete strangers.

You seem to have a strong connection to the ocean. How did that develop?
I have loved everything about the ocean since I was a child. I actually wanted to come to URI starting in fifth grade—for marine biology and oceanography. I have a goal of preserving the oceans so that many generations after me will be able to experience the beauty I have experienced.

Christina Young is a junior from Connecticut.

Isabella shared these photos from a day she spent surfing with her dad last summer. “This summer,” says Isabella, “my parents (my mom is Vickie Iwuc ’82) bought me my first surfboard! I worked in a lab at URI last summer and lived in Kingston. I spend many a day at the beach surfing. My dad brought his longboard and we surfed together and had a great time!”

Peter Krekorian is an ocean engineering major from South Kingstown who does photography on the side. “Most of my friends surf,” says Peter, “and I captured this shot at Point Judith around sunset in early November. The surfer is Laird French, who is a URI marketing major/photography minor, and also from South Kingstown. We surf year-round, and we are both lifeguards at East Matunuck State Beach.” You can find more of Peter’s photos on Instagram. 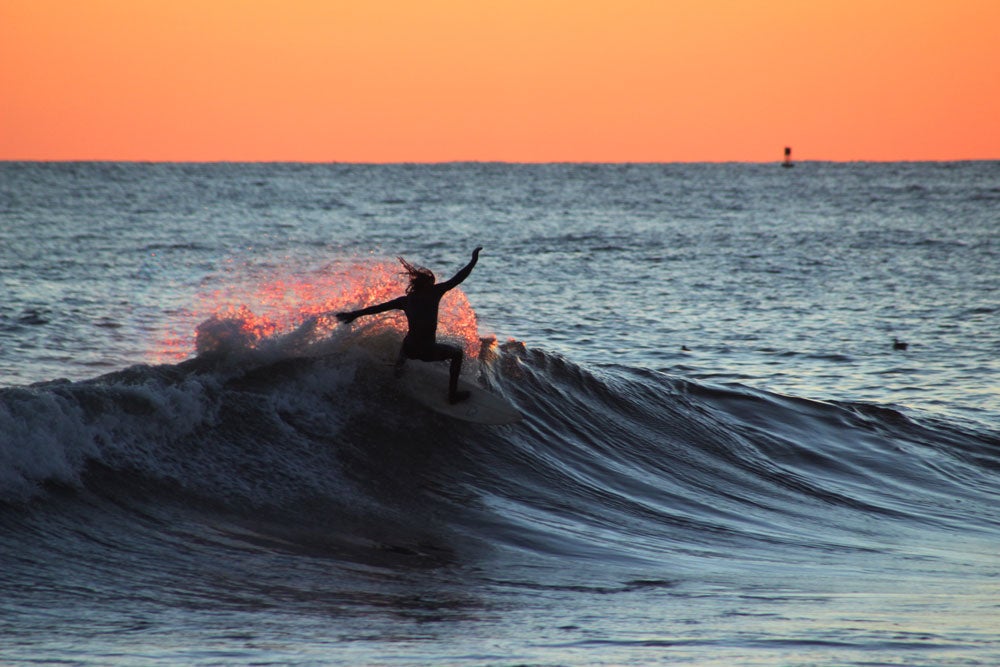 Lori sent us two photos of a lone surfer from winter 2018, and two photos of surfers heading out early one morning in spring 2018, at Deep Hole in Matunuck, a popular South County surfing spot. That morning, says Lori, “the water was lined with surfers, young and old, enjoying a great morning of ‘overhead’ waves. It was the type of morning I looked out my window and saw a great sunrise and heard the surf. I knew I had to head to Deep Hole. I captured the duo heading out and the surfer near the fence with his four-legged companion following behind.” You can find more of Lori’s photos on Instagram.

The hurricane stalled off of the shore of the Carolinas. It was the summer of 1967… September to be exact and the huge waves began crashing on the shores of Rhode Island beaches for days. It was sort of like being in Hawaii without having to leave home.

It took several days for me to get up the courage to put my board on my roof rack and head down to the beach. The first day I tried, the huge breakers could be seen from Kingston Road breaking hundreds of yards offshore at Narragansett Town Beach. Some were reportedly coming in at 30 feet (I think that in the 20+ foot range was more likely), and that was definitely not for me, as I was not that good a swimmer in ’67. Besides, the riptide from such waves would be more than a battalion of lifeguards could contend with, so I headed down to Point Judith where I would try my luck at Sand Hill Cove (now Roger Wheeler State Beach) where the obvious advantage of the breakwater at the Harbor of Refuge would form a natural foil to the enormous surf that drummed relentlessly there, too.

Surfers where paddling out to just inside of the breakwater that is hundreds of yards from the shore. Try to imagine such huge breakers being cut and weakened only slightly as they crashed into the masses of stone that made for Sand Hill Cove having the reputation as a family beach because of its calm waters.

My surfing pal, Paul, a high school surfing buddy, and a future URI graduate, had to work on that late afternoon that would see me carry my surfboard from the beach parking lot in a scene reminiscent of a Beach Boys album cover.

Once at the water’s edge, I decided to play it safe again and put my board in just to the right of the beach pavilion, toward the Galilee side of the beach. Here the waves were coming in 15 feet or less, some of them crashing farther out to sea and reforming in lesser sizes that suited my needs as the light of the day began to lessen.

I paddled out into the crashing surf and made it to a part of the water where it was temporarily calm. And then the 15-footer began to make its presence known at a distance that I’m unsure of as I write. I turned the board and began to paddle furiously and was easily swept up at the top of the glassy surface of this monster. It was like a kind of surfer’s heaven as I stood up and began the descent down the face of the wave with its left break.

The tube of the wave curled around me and I heard a sound in that tube that was nothing like anything I had heard in the years that I had surfed. It was like all of nature, or at least all of the power of the sea, was speaking directly to me: Sort of like the echo of a large conch shell held to the ear and amplified…It was both eerie and beautiful at the same instant and then I misread the breaking of the wave all around me. The wave was collapsing.

Before I could cut out of the wave by swinging the surfboard’s nose around toward the open ocean, it crashed and pulled me down to the ocean bottom where it gave me a stern lesson in the power of the natural world. I was pushed and held helplessly against the ocean floor until the wave had spent its energy and when I came up for air, I had to get my bearings fast before swimming to shore with what little energy I had left. I could see my board bobbing like some toy way off on the distant shore as I headed in in the twilight of the day. I fell onto the shore exhausted with all of my energy spent.

I’ve tried to be as objective as possible in describing the unbelievable scenes of those days long ago when a powerful ocean storm stalled far away and sent those beautiful swells up onto the shores of the ocean beaches that I had loved since childhood.

Are there other impressions here? The stark blue sky against the blue/gray sea… The ever-present salt air… The masses of sea foam formed by the great breaking waves… The blessed offshore wind that miraculously kept those behemoths from crashing prematurely.  The almost indescribable colors of the ocean and pastels of the sky and the horizon during twilight. And my surfboard that came from Goldie’s Surf Shop in Cranston.

*The Instagram profiles linked here are individual profiles and the University of Rhode Island is not responsible for their content.