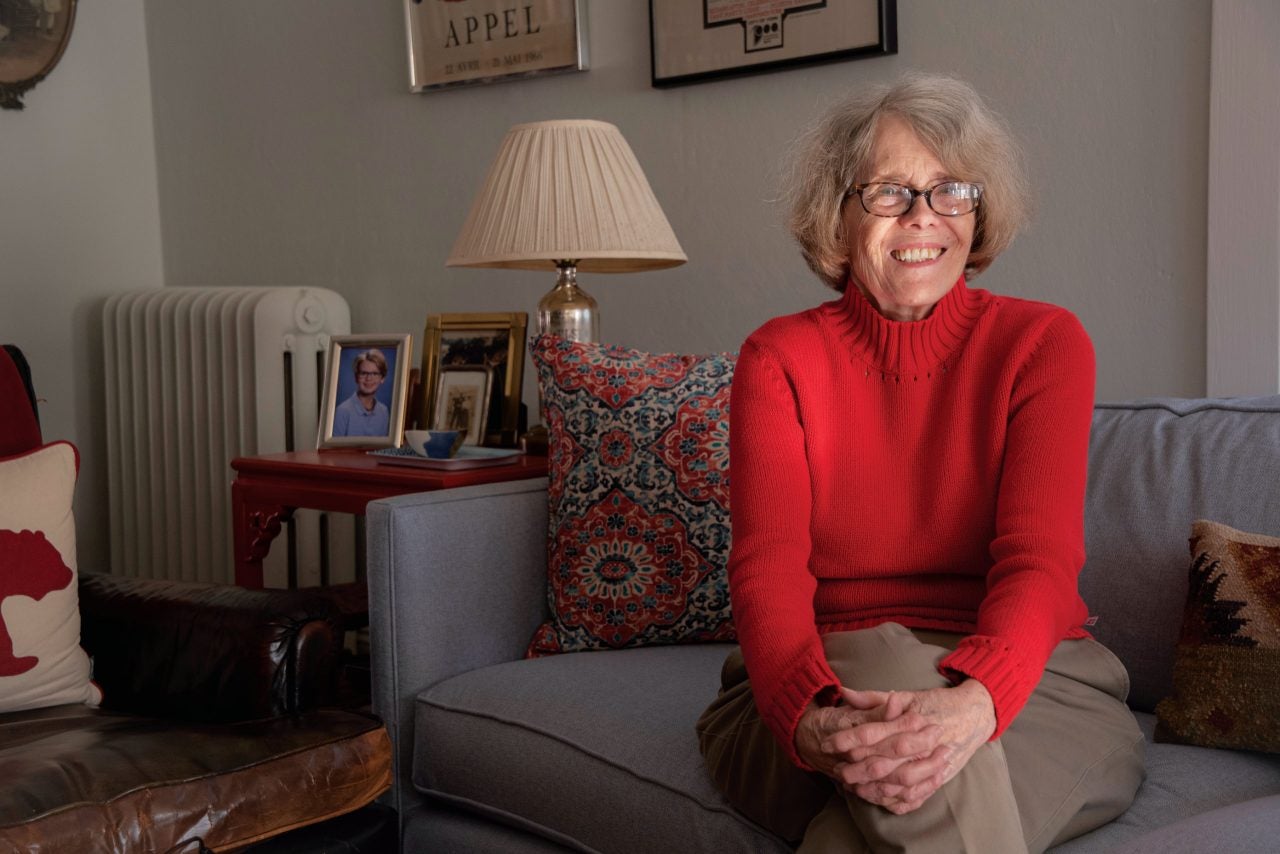 Professor Emerita Linda Levin in her Providence home. Shane Donaldson ’99 says, “Linda Levin kicked my butt on a regular basis, and I could not be more thankful for it. She had an incredible impact on so many students.”
PHOTO: NORA LEWIS

If you were lucky enough to take a class with journalism professor Linda Levin in the 1980s and ’90s, you surely remember her. Maybe you’re even still in touch with her. Her no-nonsense teaching style, her devotion to her students, and her pure enjoyment of teaching are her unforgettable legacies.

Linda Lotridge Levin never wanted to be a teacher.

“‘Don’t be a teacher!’ I heard this 10,000 times a day from my mother,” Levin recalls. No matter. Levin wanted to go to medical school. But her mother—a driving force in her life—would not send her. It was the 1950s and Levin’s mother thought the expensive degree would be a waste of money since she believed her daughter would probably get married, have babies, and never work as a doctor. “So I had to choose another major,” Levin says. “I had a typewriter and I didn’t mind writing.”

As a student at Michigan State and later Boston University, Levin was inspired by two professors who “knew so much” and also gave life to the material, and she emulated them. Years later at URI, Levin taught about Joseph Pulitzer by donning a full beard and suit to depict the iconic journalist and publisher. “I wanted it to be fun,” she says. “If you can’t have fun, why go?”

“She was always highly engaged,” recalls Brett Davey ’90, currently the director of marketing at South County Health. “She never mailed it in, not even once. It’s clear how much she loved teaching and her students,” he says. “There’s a reason so many of us have stayed close with her decades after graduating. She’s fun to be around. Always has been.”

But a professorial career was not initially on her radar. After graduating, Levin became a successful health and medicine reporter and enjoyed it immensely. She married Providence Journal reporter Len Levin and together they raised two girls. One day, Levin recalls, she was approached by an administrator at her daughter’s elementary school. Would she be willing to teach an after-school news writing class to fourth-graders? She accepted the challenge. “I hated it! They wouldn’t settle down,” she says. “I was always yelling at the little pissers.”

In 1983, Levin was offered a position teaching journalism at the University of Rhode Island. This time, she was smitten. She’d found her niche with college-age students. “I had great students,” she recalls. “I loved them and wanted them to be successful.”

“She was a one-of-a-kind professor,” remembers Gregg Perry ’88, president at the public relations firm the Perry Group. “She’s sarcastic, funny, no bull. At the same time, she was caring and compassionate and wanted students to be their best.”

Steve Greenlee ’91 was a journalism major in his sophomore year and had not yet met Levin. He knocked on her door to inquire about an internship and found a lifelong mentor. “She had no reason to help me,” says Greenlee. When he landed a job as assignment editor at The Boston Globe nine years after graduating, Levin was the first person he called. Now managing editor at the Portland Press Herald in Maine, Greenlee credits his career to Levin. “She takes a lifelong responsibility for her students,” he says.

Levin thrived as a professor and in 2001 became the chair of the journalism department. She developed expertise in First Amendment issues, media law, and the history of journalism. The recipient of many industry awards, she has been a fellow of the Poynter Institute for Media Studies, the American Press Institute, and the Annenberg Washington Program. Levin is the author of The Making of FDR: The Story of Stephen T. Early, America’s First Modern Press Secretary. She retired from teaching in the classroom in 2012. But those of us who were fortunate enough to study with her continue to consider her lessons on a daily basis. •