Harrington School of Communication and Media Assistant Professor Jason Jaacks on why nature is the greatest show on earth.

If you ask what motivates him, award-winning filmmaker and photographer Jason Jaacks will say he’s chasing awe and wonder.

An assistant professor of journalism at the Harrington School of Communication and Media, Jaacks has worked for National Geographic, Discovery Digital, PBS Digital Studios, The New York Times, and the Tribeca Film Institute, among other media outlets. His research interests include coastal resilience, microplastics pollution, sustainability, and science communication.

“When talking about sustainability and climate change, it’s easier, from a communications standpoint, to tell people how bad they are, but that doesn’t galvanize people. It doesn’t make them care,” Jaacks says. “Make people feel bad, and they’ll go back to TikTok and XBox and everything else that seems more fun.

In addition to his still photography, Jaacks’ pursuit of the astonishing has produced a surprisingly diverse body of digital film work. There are documentaries: In Search of Tzotz studies the elusive giant vampire bats of the Mayan rainforest. Silent River follows a Mexican family in their efforts to save the Santiago River, one of the most polluted rivers in Mexico. Sea of Troubles examines the effects of climate change on the California coast. Moccasins and Microphones: Modern Native Storytelling Through Performance Poetry features the Santa Fe Indian School and a Native American Youth Performance Poetry Team. And Jaacks’ short films for media outlets like National Geographic and The New York Times cover topics such as the forest-to-table movement, orphaned sea lions, mushrooms, and salmon smolts.

Jaacks shot this photo of a bundle of plastics and seaweed floating at the surface of the water at Narragansett (R.I.) Town Beach. Jaacks is the lead on multimedia for the URI research group Ocean State Initiative for Marine Plastics, and a faculty advisor to the URI research initiative Plastics: Land to Sea.

Reporting on microplastics in Narragansett Bay 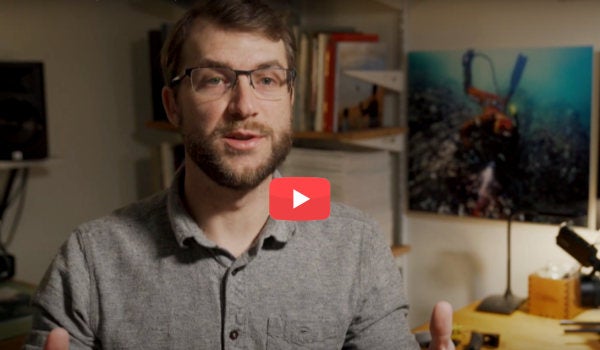 Beneath the Wine Dark Sea: A visual storyteller, Jaacks uses the power of images to inspire, educate, and motivate action (5:36).

At URI, Jaacks works with undergraduate and graduate students, teaching both foundational and advanced courses. One puts students in teams and asks that they apply the skills they’ve learned in the classroom to create digital content that meets industry standards. For a couple of years now, Jaacks has had his students focus on some aspect of microplastics pollution in Narragansett Bay.

“My background is in science, the environment, and natural history. The collaborations I’m building—in and beyond what I do in the classroom—are to find operative storytelling opportunities. My interest in microplastics came about after the University’s microplastics summit in 2019,” Jaacks says. “We had all these experts in the same room at the same time, and it seemed an immense opportunity for two things: to collaborate with researchers to produce broader impact and engagement tools and to do some reporting about microplastics.”

“We had all these experts in the same room at the same time, and it seemed an immense opportunity for two things: to collaborate with researchers to produce broader impact and engagement tools and to do some reporting about microplastics.”

Jaacks saw the opportunity to include students in the work, too. They could research and pitch viable stories on microplastics, the kind of stories professional journalists cover.

“I want students to go out and do the reporting,” Jaacks says. “My students work collaboratively, much in the way that newsrooms work, researching, pitching, and then producing a story or a series of stories.”

Harrington School of Communications and Media

Whether you see yourself in the world of multimedia journalism, corporate communications, film production, or digital and social media, URI’s Harrington School will give you the knowledge, skills, and experiences you need to get there.

What the students choose to focus on—writing, videography, sound reporting, or editing—is their choice.

“Students have the leeway to develop skills in whichever medium they want to work in,” Jaacks says. “The course simulates situations like those they will encounter on their first job. They’re going to be assigned some beat and will have to become something of an expert in something they know nothing about.

“And most students know nothing about microplastics, so they go through that whole process, together, collaboratively.”

Wild sockeye salmon on the Kanektok River in Alaska. Jaacks is engaged in a long term visual research project investigating the conservation status of Pacific salmon across their range.

On having enduring impact

In doing the work, there can be moments of awe, Jaacks says. Not all such moments are pleasant, he notes, but they can raise awareness, a different but also positive effect. 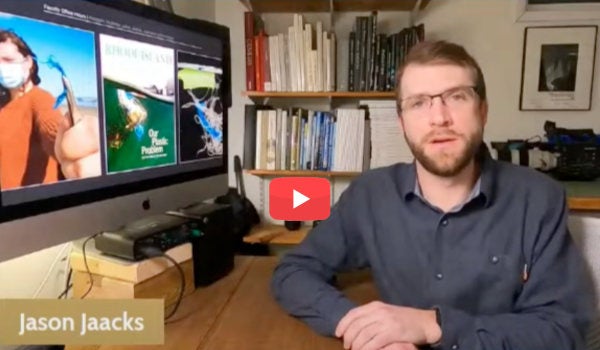 Jaacks shares his own award-winning work and discusses how he teaches his students to become visual storytellers in this URI Foundation and Alumni Engagement talk (1:01:25).

“You can tell me that the earth is 70% water, but I need to feel that for it to have impact. There’s a difference between understanding and feeling a thing,” Jaacks says. “Tell people that they eat seven credit cards’ worth of microplastics over the course of a year and people are wowed by that.

“And then there are things that are so unforgettable that they take on a life of their own,” Jaacks continues. “I shot Silent River almost a decade ago and that film is still circulating. It’s still making the rounds.”

Jaacks references his documentary about the Santiago River, so polluted by manufacturing refuse, cobalt, arsenic, and PFAs, that the creamy, white foam it generates can peel the paint off cars. The foam is suspected of causing a significant increase in health problems, including cancer, for those who live nearby.

“That goes to the power of visual storytelling. It can hit you through sight and sound, which can be deeply moving. And that—when wielded in an interesting way—is compelling for an audience,” Jaacks says.

“When you train the next generation of storytellers,” Jaacks says, “You broaden the impact far beyond what I can do as a single storyteller.”