Susan Burlew Southard ’77 wrote to share her story of rowing at URI. From hard morning workouts in icy water to that exhilarating feeling at the start of a race—crew would come to influence Southard’s life in countless ways.

Practicing on Narrow River. Southard is second from left.

A freshman at URI in 1973, I was recruited by the volunteer crew coach in one of the dining halls—food tray in hand as I slowly worked my way toward the infamous “freshman 15.”

Rowing was a club sport in the 1970s and the focus was on the men’s team. We had a male volunteer coach who could only offer minimal coaching time to us pesky, insistent women who just wanted to row and race. We got hand-me-down rowing shells, but we didn’t complain; we just wanted to participate. I clearly remember trying to use the weight room in the gym with some of my teammates and being politely told the equipment was reserved only for the football players. At that time, Title IX packed little punch in the face of the realities on campus.

My memories include foggy mornings on Narrow River; hitting ice chunks with my oar; blistered hands; muddy, cold socks; and our coach reminding us that “pain builds character.” Very few of us had any real exposure to athletic competition in our lives at that point. The nervous anticipation at the starting line of a race was a feeling I had never experienced—it was exhilarating!

After graduation I ended up working in the western U.S., in rugged, steep terrain, as a soil surveyor. The fitness and pain tolerance I developed on crew prepared me to do that strenuous job. Participating in athletics taught me what my body could do—and taught me the importance of staying fit. Today, I still participate in swimming and 12K running races. Last year, I helped teach an outdoor field class in the southern Andes in South America, and, while hiking to field sites, I felt the old, familiar breathing patterns of rowing kick in. 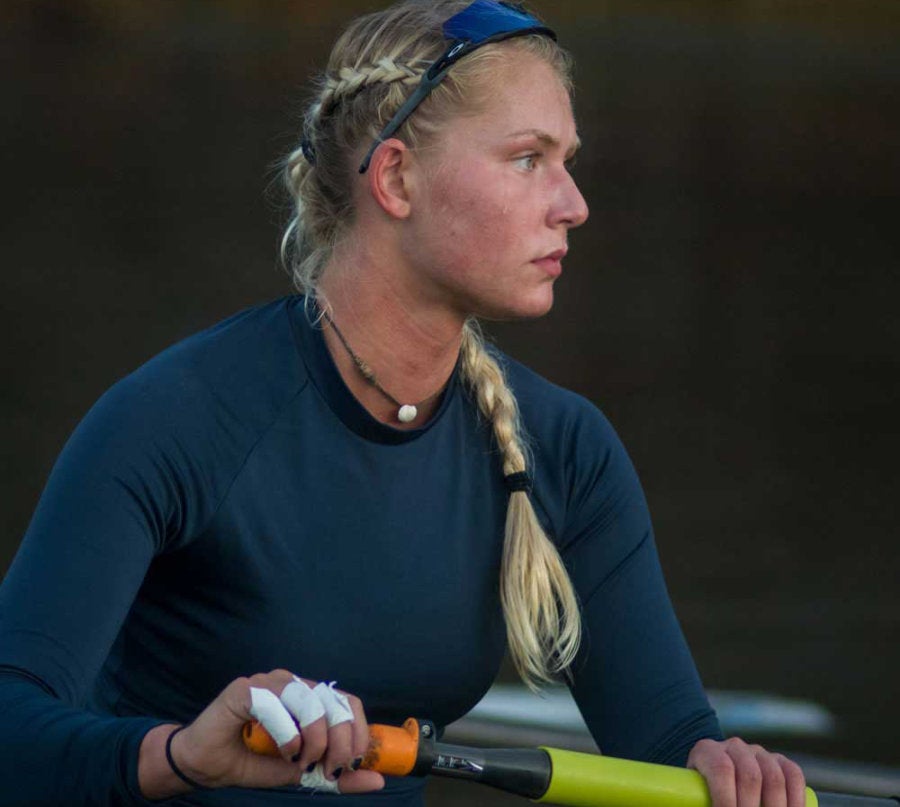 Kat Gillies ’22, kinesiology major, and first-year walk-on to the URI Women’s Rowing Team was one of 15 rowers in the nation to be invited to 2019 US Rowing Under 23 Women’s Olympic Development Program Camp.

My sister—whose introduction to rowing was when our URI coach let her go out in his coach’s launch during practice one day—became a varsity rower in college, and a twice-over national junior rowing champion who qualified to compete in the Olympic Trials. My oldest daughter, after hearing me talk about rowing at URI, ended up a varsity 4-year oarswoman for the University of California at Davis.

I treasure my memories of rowing at URI and the impact it had not only on me but on my family. I also treasure the friendships I made, which, almost 50 years later, continue today. I also like to think that our persistence as women rowers back then helped develop the foundation and legacy for the successful Division I women’s rowing team that exists today at URI. •

Editor’s note: Today, you can find URI crews in both varsity and club sports. Women’s rowing is a varsity sport, while the club crew is co-ed. Read about club crew in the summer 2020 feature story, “Join the Club.”