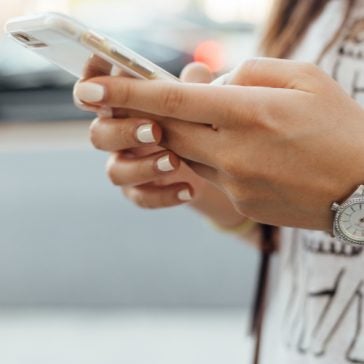 It’s possible if you put away your phone.

So says Tracy Proulx, Harrington School of Communication and Media senior lecturer. Her course, “COM 321: Social Media and Interpersonal Communication,” requires students to examine what effect their social media and technology use has on their perceptions, identities, and relationships. And, in doing so, they just might get better grades.

“The rule in my class is no phones,” Proulx says. “If a student is even touching a phone, it’s one point off of their final average.”

Her justification: Researchers have found that a student with a phone on their desk will score lower on an assessment than one who keeps the phone in their backpack.

In the course of the semester, Proulx requires students to analyze their social media use for a week, asking questions such as, “How many days, weeks, years did you waste on Instagram? You can’t get that time back. What could you have been doing?”

Students are often aghast at their self-study. “I’m a horrible person,” one student told Proulx. “I’ve been wasting my life.”

The Pew Research Center reports that 95 percent of U.S. adults own mobile phones. How much wasted time that adds up to is impossible to say, but knowledge is power, Proulx says. “Use it, but understand it. Don’t let it dictate your life.”